By Ryan Stewart
European Football Fifa Fifpro Gonzalo Higuain Kevin De Bruyne Opinion Pierre Emerick Aubameyang Sergio Aguero Slider Articles Thibaut Courtois
The annual Best FIFA Football Awards are little over a month away and on Wednesday morning the 55 nominees for the FIFPro world XI were released, jam-packed with the best players and biggest names in football. Some stars, however, were perhaps a little harshly snubbed from the list, let's see who they are.

Five Goalkeepers were named among the nominees, however, Chelsea's Belgian shot-stopper was not one of them. He may well be missing out to five keepers that thoroughly deserve their place among the elite list but Courtois will still feel quite hard done by. The big man won the golden glove in the Premier League for most clean sheets and was part of a Chelsea side that romped home to the title, losing just three games all season. Certainly sounds like a ‘keeper at the top of his game but his Premier League rival David De Gea was given the nod ahead of him in the PFA team of the year and it seems history has repeated itself with the FIFPro nominations.

The big man won the golden glove in the Premier League for most clean sheets and was part of a Chelsea side that romped home to the title, losing just three games all season. Certainly sounds like a ‘keeper at the top of his game but his Premier League rival David De Gea was given the nod ahead of him in the PFA team of the year and it seems history has repeated itself with the FIFPro nominations.

Another Premier League player, and another Belgian player too! This time it's Kevin De Bruyne of Manchester City who will undoubtedly feel aggrieved to be left out of the list. Despite perhaps not being amongst the goals last season as often as he may be expected to be, De Bruyne still provided a massive 21 assists in the league last campaign for Pep Guardiola's side. He has continued such creative form in the early stages of this season also and when it comes to Manchester City's ability to create chances at will, De Bruyne is the main man. When at his best you really do get the sense that he could make the grade for any club in Europe, even those that boast a higher stance than Manchester City's current stature.

De Bruyne's City teammate, and usually the player on the end of the passes! Aguero is, in every way imaginable, a goal machine. Last season Aguero finished with 33 goals in all competitions which incidentally is the most he has tallied in his career. Whilst he may be notorious for injury spells he still manages to deliver in the goals department regardless and always finds himself towards the top of the goalscoring charts. Not a single Manchester City player has been named in the list and whilst that may coincide with their underwhelming trophyless season, you still cannot look past the fact that Aguero was as sensational as usual

Borussia Dortmund's lightning quick hitman was subject to heavy transfer speculation during the summer but the Gabon international eventually stayed put and will no doubt continue to tear opposition defences in the Bundesliga. After scoring a whopping 40 goals in all competitions last season it is some surprise he has been omitted from this year's shortlist, even when you look at the sheer quality included under the forwards category. Naturally, if it were chosen based on amount of goals scored through the season, Aubamayeng would have a place on the list.

Another player who scored plenty of goals last season but is unlucky to be excluded from the prestigious shortlist. Higuain made a big money move to Juventus last summer and there was much debate whether he was worth a rumoured £75m at the age of 28. The Argentine striker though was more than up for the challenge as he scored 24 league goals (32 in all competitions) as Juventus once again claimed the Serie A title. Out of the players in our list, Higuain is probably the most reasonable name to be left out of those nominated, but to make the step up and be the man expected to get the goals for the league favourites is never easy and credit where it's due, he did exactly that.

Naturally, only 11 players can make the team from the 55 nominated and there are a few places not quite spoken for as of yet. The men in the list above however will certainly feel they have been overlooked for a nomination after their exploits in the past year but that will perhaps give them the motivation to come back stronger. 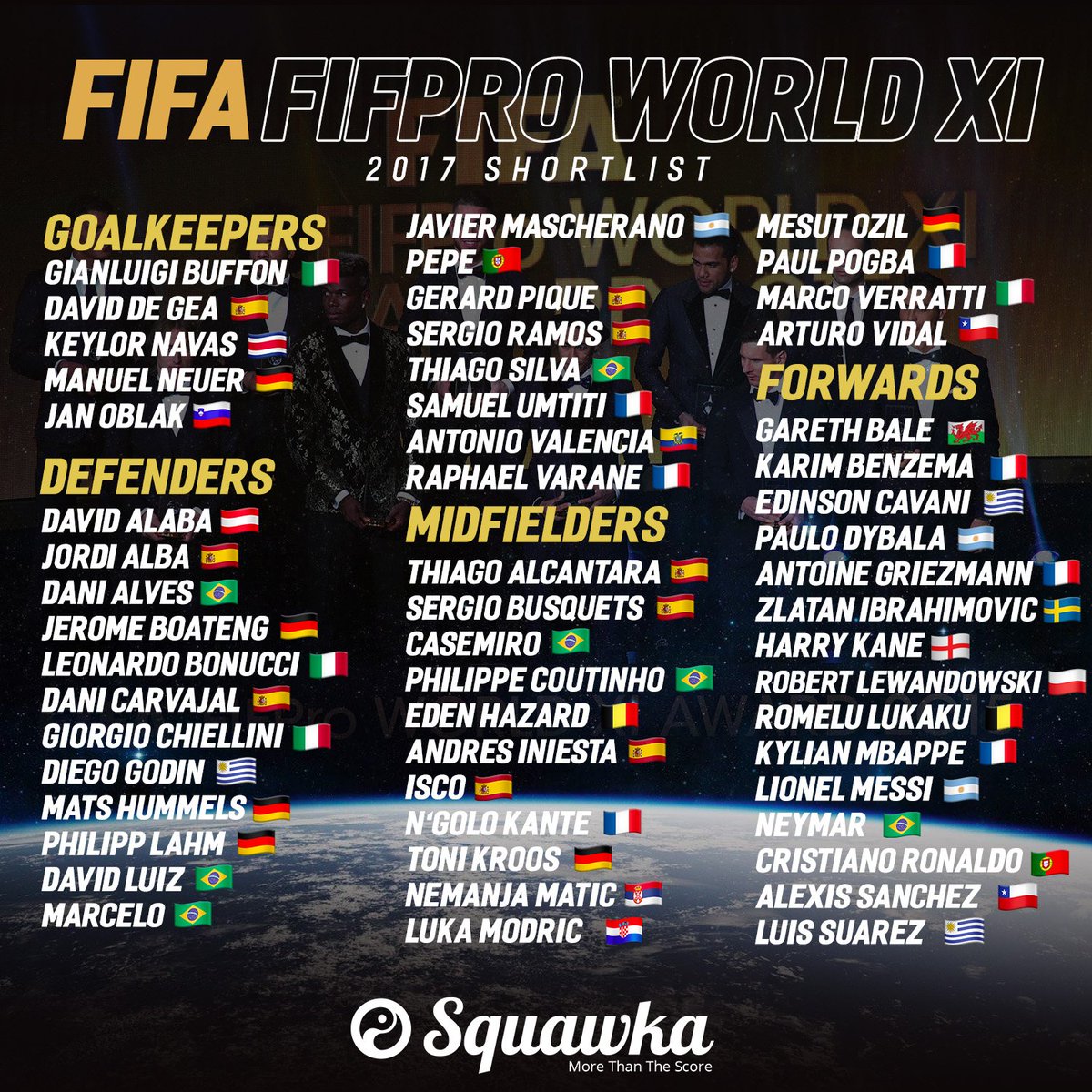