Gateshead: The latest club on the brink due to an unfit owner

It's becoming an all too common problem in football in England; owners making a mess of clubs. Gateshead’s fans are the latest to suffer the devasting effects since being bought by Dr Ranjan Varghese, but what next for the Heed...

Gateshead has been in the upper echelons of the non-league game for many years. Despite living in the shadow of neighbours Newcastle United they are a proud traditional club who have made great steps in recent years to try and finally get over the line and once again become a Football League team.

They came close in 2014 when they reached the National League playoff final, but unfortunately, they lost 2-1 in the final to Cambridge United. In recent years, Gateshead has pushed for the playoffs but have fallen short. A change in owners came last summer which was meant to be the start of something new. However, not even the most pessimistic of Heed fans would not have seen what was to come in the 2018/19 season.

Varghese took over the club in July last year, but even before then the problems had started. Previous owner Richard Bennett had already made cutbacks in the summer meaning the club did not have many players on their books when the takeover went through. Before the season started due to their financial problems, the club was one of the favourites to be relegated from the National League.

What they achieved on the pitch in the 2018/19 season has been nothing short of remarkable. Despite a transfer embargo being placed on the club, manager Steve Watson worked wonders on the pitch. This success led to interest from National League North side York City, who Watson would join in January. Ben Clark took over, and given the circumstances, it was a fantastic achievement that right until the final few weeks of the season they competed for a play-off place. 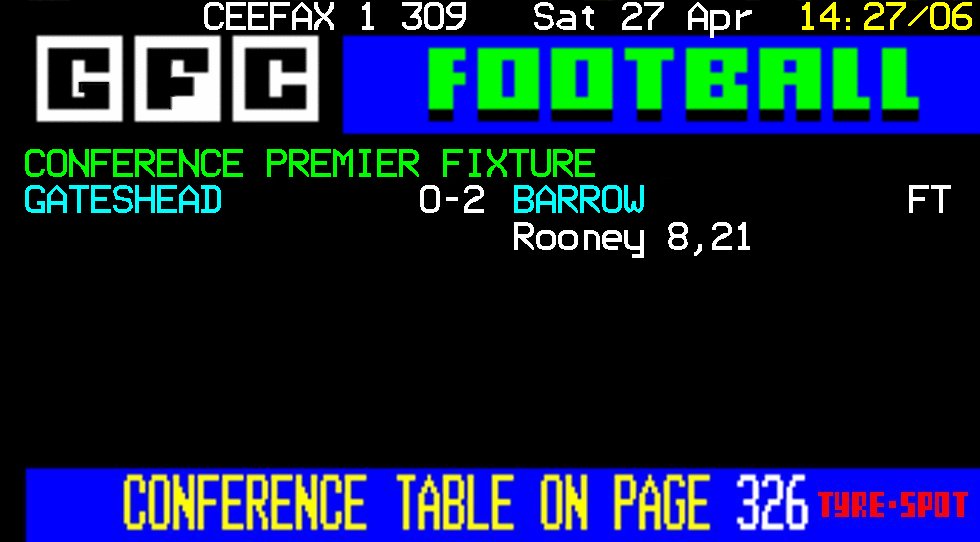 The Heed end a memorable season with a home defeat to Barrow. While the lads may have just fallen short, we'll never forget the passion and drive they've shown over 46 games. Legends, the lot of them.

This was with the handicap of having a threadbare squad that grew smaller as the campaign went on. Gateshead also had to contain with many staff and players not being paid for spells of the season.

Now that the season is over, many thought answers would be received but no. New directors have been appointed to the club, while the staff have quickly been removed. Players have gone, backroom staff gone and with his assistant having already been sacked, manager Clark was fired by email earlier this week.  The only player left is Scott Barrow whose contract is due to run out in June.

The club had already been kicked out of their home, the International Stadium, towards the end of the season due to unpaid rent to the council who own the ground. An agreement was made to play their last few home games there, but they were unable to train on the pitch.

The club, in its current form, is as down to the bare bones as possible. No ground, no players, no staff and the majority of fans have stated they would refuse to return under the current regime. The club is still up for sale, a deal had nearly gone through during the season with former Rochdale owner Chris Dunphy. However, it did not with Dunphy stating it was impossible to complete due to Varghese.

Rumours have flown around about the club relocating for next season including moving to the rugby team Newcastle Falcons ground, Kingston Park. However, in an interview with BBC on Friday morning, Varghese played this down along with several other concerns of fans passing them off as small minority.

The fans had their say on Wednesday night...

Gateshead FC Soul
GatesheadFCSoul
Follow
Following tonight's fan meeting, we can confirm that we are going to create a new football club to ensure football continues in the borough of Gateshead for the fans. We are backed by key partners and we will announce further details in due course. #HeedArmy
Follow
22:24 PM - 1st May 19
304
1333

A new club and the future?

The latest fans meeting took place on Wednesday night with hundreds in attendance to see what could be done and the future for the club. At the meeting, it was decided by the majority to form a new club as they could see no way back under the current owners.

A huge drop in divisions is unavoidable. They are hopeful of a place in the Northern League (step 5), if not they would be placed in the Wearside League (Step 7), either a four or six division drop from their current place in the National Premier.

Either way, if a new club is formed it would be huge for the fans. Fellow North East side Darlington were placed in the Northern League back in 2012 following demotion and despite logistical problems, the fans on the whole largely enjoyed the ride. They currently are now in the National North division (Step 2).

It does beg the question of owners in football currently. Every week you hear of club’s going bust or protests from fans against owners. The FA’s position in it all has to be looked at as they are meant to ensure that anyone that purchases a club is fit and proper to do so? There has been no mention at all from the FA in relation to Gateshead and no word of any intervention on their part.

In the last 20 years, you just need to look at the number of clubs that have reformed through their fans. The FA needs to change something, they need to step in. As for Gateshead fans, it will be a long road back, but they will get there. Their story is far from over.