Gylfi Sigurdsson netted his 50th Premier League goal with aplomb two weeks ago during Everton's 2-1 win over Leicester City. It was a fantastic finish, one which epitomised the Iceland international's return to form after a forgettable debut season at Goodison Park.

Players usually take time when settling into new surroundings. They must adapt to differing responsibilities after making a move. When the proposed deal is a club-record £45 million, expectations are naturally high and supporters increasingly demanding.

To call the Toffees underwhelming last campaign would be an understatement. They were a side disjointed, left in the lurch by various managerial rumblings, never performing with much cohesion. Players regularly dropped and returned into the starting line-up at will. Fans aired their frustration; the season as a whole was grim.

Sigurdsson, despite his efforts, was not exempt from criticism. After netting five times and creating 13 assists the season beforehand while at Swansea City, he combined for only seven goal contributions. The 29-year-old already has five in eight matches this campaign. That explains it all, really. Playing in various attacking positions hindered him with regards to continuity, while his creative genius was restricted to a month or so before Christmas.

In Sigurdsson's defence, a knee injury sustained in mid-March sidelined him for the season's remainder. He missed eight games and was an unused substitute twice. Holding the midfielder to a higher standard, though, especially during a World Cup year, critics were justified in expecting better from Everton's new talisman. 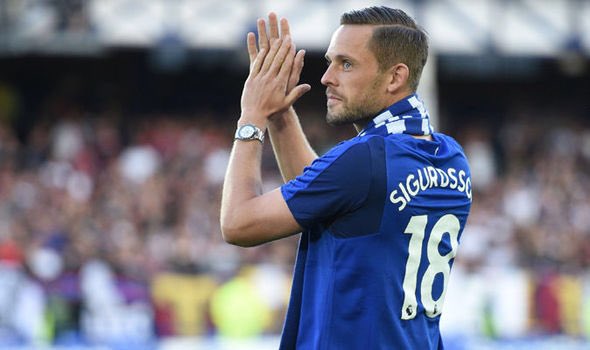 So far this campaign, Sigurdsson has shown precisely why the Toffees were content to part with £45 million. His defensive contribution has improved for both club and country. He's embraced the challenge which comes with linking up alongside new teammates - six summer acquisitions, including Brazilian forward Richarlison - who upon arrival took plenty of attention from his club-record fee.

While playing in his preferred number ten role, Sigurdsson has proven former boss Sam Allardyce wrong. He's not ''too slow'' to feature weekly. Instead, Marco Silva's decision to allow more of a creative license unlocks the best from him

The deft flick to leave James Maddison for dead, the vision to spot Kasper Schmeichel slightly off his line and wherewithal to strike ferociously into the top corner. All signs of a top quality player, one who offers individual brilliance to help their team in precarious situations. Sigurdsson's goal at the King Power was his 19th in the Premier League from outside the area - no one betters that since he arrived in England six years ago. Philippe Coutinho is level, while David Silva and Christian Eriksen both have 16.

It's frustrating Sigurdsson's move to Tottenham Hotspur was ultimately unsuccessful. He showed enough promise to justify thriving in North London. Perhaps thrust towards the deep end too early, the Icelander has since matured. He's currently relishing being one of Everton's key players, aiming to break the top-six monopoly.

As the campaign progresses, it'll be interesting to witness how Sigurdsson continues to gel with attacking teammates. For now, his influence is not going unnoticed.