Has Frank Lampard coached Mason Mount into the Chelsea XI?

This season’s Championship play-off final will be a battle royale, not just between two massive clubs, it’ll be a showdown between two of the most promising English midfield talents – Jack Grealish and Mason Mount. The younger of the pair, Mount, has had a better campaign than his Villa counterpart. And deserves to be rewarded with bigger responsibilities.

Mount is enjoying the season of his life with Derby County; it’s one in which he notched his first senior hat-trick. Mount grew in stature as the campaign wore on – altogether the 20-year-old bagged eight goals for the Rams. Plus a goal in the playoff semi-final to help Derby reach the Wembley showpiece. Mount’s five assists this term stands him out as a proper team player.

Frank Lampard deserves credit aplenty for Mount’s fine displays. The Chelsea record-scorer has polished the 20-year-old's talent, refining him into a confident, exuberant playmaker. One with the guile and nous to take a game by the scruff of the neck.

Importantly for Mount, Lampard ensured he got enough playing time to prove himself. The goal-laden midfielder took the opportunity with both hands and repaid his managers faith. The ankle problem he suffered last November, regardless.

Usually deployed in the left side of Derby’s three-man midfield, Mount has learnt from his legendary gaffer how to find space, create chances and shoot on target. He’s also mastered the art of tracking back to help his team when they’re under pressure. Mount just gets better and better.

Mount was only six years old when he joined Chelsea. He featured heavily for various youth teams before joining the loan army.

But before heading to the Dutch Eredivisie in 2017, Mount, who was then Chelsea’s under-18 skipper, had his contract renewed by four years. There’s no wriggling free, Mount is Chelsea’s.

Despite Mount’s excellence in Derbyshire, many still write off his chances of getting into Chelsea’s first team. Howbeit, this might not be the case. Chelsea doesn’t just want Mount, they need him. 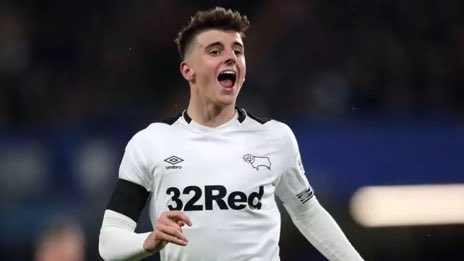 The Chelsea Echo
TheChelseaEcho
Follow
Mason Mount is set to be involved in Chelsea's pre-season, we understand. https://t.co/iVckLvTdNk
Follow
08:20 AM - 11th May 19
86
1424

The Blues has been banned from making transfers unless their lawyers can convince the Court of Arbitration for Sports otherwise.

Still, Maurizio Sarri’s midfield will take some facelift this summer one way or the other. Tiemoue Bakayoko is due to return from Italy, while Matteo Kovacic is expected to return to Spain. Ruben Loftus-Cheek’s injury also gives cause for concern – the big man could miss the start of next season.

There’s also the curious case of Danny Drinkwater. The man has been told by Sarri he has absolutely no chance in this regime.

Whether or not the transfer ban is sustained, there certainly will be a role in Chelsea’s first team for someone like Mount. Something similar to what Phil Foden enjoys at Manchester City.

Chelsea has a reputation for not giving youth a chance. The trend has gone on for well over a decade now. It doesn’t seem to have changed. Which explains why Callum Hudson-Odoi has started a pitiable four Premier League games.

As much as it’s clear Chelsea needs Mount, they may still be blindsided enough to ignore him for the coming campaign. Like Tammy Abraham fears.

If that happens, Mount’s agent (Stellar Football) must get this exciting a Premier League club to hone his talent. Given how good he is, that shouldn’t be a problem.

Without question, Lampard would push to keep him whether or not Derby wins the playoff. If they do, he rather not go elsewhere.

The bottom line is, the young man has proven his heroics with the Chelsea youth team isn’t a fluke. Chelsea needs a large squad for the rigours of 2019/20. As young as he is, Mason Mount can truly help.

Manchester United’s motto reads Youth, Courage, Greatness. We’ll take it that these are the three core values upon which the club is founded. As you can see, “youth”…