Has Miguel Almiron done enough to deserve interest from Arsenal?

There’s so much going on in the world today. Every aspect of life, let alone football, is hit hard by the Covid-19. The pandemic dismissed fans from stadiums and forced players, managers and owners into isolation. But football will never die. While it steps aside for more serious matters, there's no harm in thinking about future transfer business. In North London, multiple reports indicate Arsenal are sniffing around Newcastle United midfielder Miguel Almiron. Unlike their previous austerity, the Gunners will spend if they ultimately decide they want the player. The big question? Does he possess the quality to thrive at the Emirates?

Almiron earned accolades in Major League Soccer, joining fledgeling franchise Atlanta United from Argentine outfit Lanus in 2016. His fine form powered the Five Stripes to the MLS Cup in just their second year on the planet. The Paraguayan made MLS' team of the season in both campaigns stateside and was named the division's best newcomer in his first year.

It’s difficult to fault Newcastle’s decision to break their transfer record to poach Almiron from Atlanta. His £21 million fee was a club-record for Newcastle and a benchmark for outgoing MLS transfers. Big things were expected when the attacking midfielder touched down at Tyne and Wear.

Brazilians aside, South American players tend to settle quickly in the Premier League. Many go on to assume legendary status. Sergio Aguero, Luis Suarez and Carlos Tevez won’t be forgotten in a hurry.

Paraguayans haven't been at the movement's vanguard, however. Fans of Roque Santa Cruz may protest but the striker managed a paltry 26 Premier League goals in well over 70 games for Blackburn and Manchester City. Diego Gavilan featured for Newcastle between 2000 and 2003 but is barely remembered by the Toon Army who expected to change the narrative. 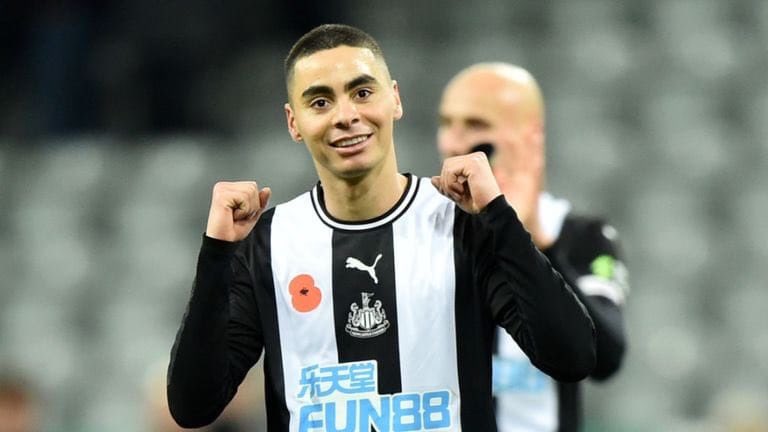 Unfortunately, the playmaker struggles to settle in the North East. After reaching double figures in goals and assists [13 each] in his final MLS campaign, fans were left bewildered when he failed to make a direct goal contribution in his first ten matches with the Magpies. A hamstring problem towards the end of 2018/19 didn’t help.

Upon recovery, Almiron continued to struggle. His end product was poor and he scarcely created chances for the Magpies. Physically, Almiron didn’t look up to the task, his 5'9, 139 lb frame constantly bullied off the ball by the opposition. He registered his first assist in his 23rd appearance, far too long a wait. Not long after helping Jetro Willems score against Manchester City, he found the back of the net himself, his first for Newcastle, robbing Crystal Palace of any points in their visit to St. James' Park last December. Almiron finds more joy in the FA Cup. His four goals helped Newcastle reach the quarterfinals but is that enough for Arsenal to go all out for his signature?

The Gunners must tread softly here. Newcastle won’t let Almiron go without making some sort of profit on their initial investment. The Gunners must be prepared to pay at least £25 million. Honestly, that money can better be invested on a player with solid Premier League, or even better, Champions League credentials.

That speculative fee is a third of what the Gunners lavished on Nicolas Pepe, another promising talent without Premier or Champions League talent who struggles to meet expectations. Arsenal may be thinking, 'Once bitten, twice shy'. Miguel Almiron is a good player with the potential to succeed at Arsenal. But he needs time to steam. Just now, he’s not ready to take the next big step.