Can Roma loan save Mkhitaryan’s career?

Henrikh Mkhitaryan joined Roma on a season-long loan from Arsenal ten days ago. The misfiring attacker is hoping to put behind his 20-month woe in North London by rediscovering top form in Italy’s capital. Whether he can remains up for debate.

Gaining prominence at Borussia Dortmund, a team for which Mkhitaryan scored 23 Bundesliga goals, provided 29 assists in 90 appearances, convinced Manchester United to splash close to £30 million in summer 2016. Unfortunately for the two parties involved, he failed to replicate such performance. Contributing toward a goal every 99 minutes during his final campaign in Germany dropped to a contribution every 207 minutes while at Old Trafford.

Arsenal offered a lifeline. Mkhitaryan arrived as part of a swap deal which meant Alexis Sanchez going to United. Neither lived up to expectations. It became apparent the Armenia international would struggle to regain his swagger, despite recording six goals, four assists in last season’s second half.

Mkhitaryan’s role diminished in this campaign’s early stages. After starting the Premier League opener against Newcastle United, he was reduced to a total 27 minutes as a substitute in tougher games away at Liverpool and home to Tottenham Hotspur. His North London derby display brought memories of a former Gunner’s struggle. Andrey Arshavin invariably gave everything but often produced little.

For Mkhitaryan, he’s now focused on reviving his career at Roma. On moving, he said: ‘’I have to enjoy playing football, no matter the place. In England, I no longer felt happy. Maybe I was not fitting so well in English football, so I think a change was good.’’ 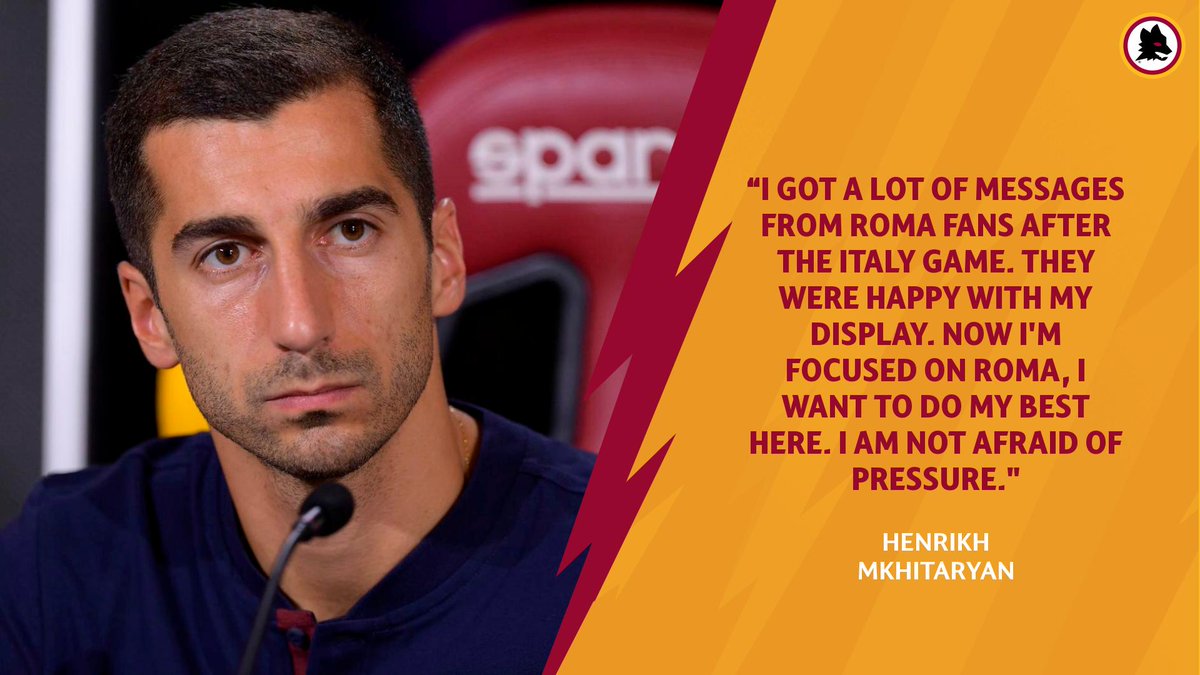 AS Roma English
ASRomaEN
Follow
“I chose Roma because it was a great opportunity for me..."

Mkhitaryan’s new side, which he’s sacrificing more than half his £180,000 weekly wage to play for, Roma are in a pack alongside Napoli, Internazionale, AC Milan and Atalanta aiming to chase down Serie A’s dominant force, Juventus. The Giallorossi have started this season slowly. Two draws, 3-3 at home to Genoa followed by a Derby della Capitale 1-1 against Lazio, put them in 15th.

In order to challenge for a top-four place, as expected, manager Paulo Fonseca must work on perfecting his preferred 4-2-3-1 formation. Mkhitaryan can help in various roles. His weighted passes connect from any attacking position. As a winger, he’s dangerous at countering owing to acceleration to get in behind. Centrally is where he can maximise his fierce striking ability.

Mkhitaryan faces stiff competition for a regular spot. Roma possess Justin Kluivert, Cengiz Under, and Nicolo Zaniolo. The three, all aged 22 or below, have started both matches this campaign. As a trio, they cover an attacking unit’s needed criteria - dribbling, long-range shooting, passing, technique, along with finishing. Understudying them, there’s experience in Argentine pair Javier Pastore, Diego Perotti.

No doubt, though, the Giallorossi will offer Mkhitaryan sufficient opportunity to impress. Why else sign him? To ensure he ousts either Kluivert, Under, or Zaniolo, the 30-year-old must first fully regain his confidence. Serie A’s style can help in that regard as he’ll enjoy more time, space to manoeuvre compared to that afforded in England’s top flight.

Since departing Arsenal, Mkhitaryan’s represented Armenia twice in Euro 2020 qualifiers. During the most recent against Bosnia and Herzegovina, he scored a brace, provided an assist and created six chances. Fonseca’s faith is pinned on him performing similarly in his set-up, beginning at home to Sassuolo on Sunday.

The Arsenal loanee finishes off a wonderful move for Armenia as he slams it into the roof of the net! 🚀

Should Mkhitaryan shine this season, Roma perhaps won’t be the only Serie A side chasing him come next summer. Italy’s giants have a tendency to pass around players among themselves. Two current Giallorossi defenders, Davide Santon, Juan Jesus were signed from Internazionale. An Azzurri icon, Andrea Pirlo represented Inter, AC Milan as well as Juventus. Juve’s Gonzalo Higuain has previously donned for both Napoli, Milan.

In peak form, Mkhitaryan would prove an asset to most European teams. His unhappiness in England coupled with Arsenal’s eagerness to cut salary costs mean he’s unlikely to return. As things stand, Roma are in pole position for the Armenian’s permanent signature. However, should he rediscover his Dortmund swagger, expect bigger clubs to step in.

Rome is Mkhitaryan’s short-term salvation. There, expect him to slightly improve on his recent level rather than excel. What follows is anyone's guess.