Hertha Berlin are the talk of Germany. Recent signings Lucas Tousart and Krzysztof Piatek represent much-needed upgrades on manager Jurgen Klinsmann's in-house options and demonstrate ambition. German businessman Lars Windhorst bought 37.5% of the club for €125 million in the summer through his firm Tennor Holding. This broke Bayern’s record of investments from Allianz and Audi. In November, he upped his stake to 49.9%, spending a further €99 million. It was termed a “long-term and promising commitment”.

Deutsche Fußball Liga's 50+1 rule states that a club in the top two tiers may sell 100% of its financial stakes to a subsidiary but must hold 51% or more of the voting shares.

Days after the second round of investment, Ante Covic was sacked. Placed 15th at the time, his progress at the club was doomed. Through Matchday 12, he managed to gain a mere 11 points.

Thanks to the cash infusion, Hertha plans further upgrades. Another €250 million is set aside for a new stadium.

Highly-rated 22-year-old Santiago Ascacíbar was signed from VfB Stuttgart earlier this month. The Argentinean defensive midfielder is accustomed to German football and superior to Peter Skjelbred. Requiring a replacement for 35-year-old Vedad Ibisevic, upfront, they landed Piatek. The Pole had a bad spell with AC Milan this season but is a potent scorer. Matheus Cunha, a 20-year-old with just 274 Bundesliga minutes for RB Leipzig this season was acquired for another €15 million.

Lucas Tousart was also bought last month and loaned back to Lyon for the season's remainder. Versatile and talented, the midfielder can be the team's fulcrum for years to come. Piatek, Cunha, Ascacibar, Tousart and summer-signing Dodi Lukebakio are the club's most expensive signings. 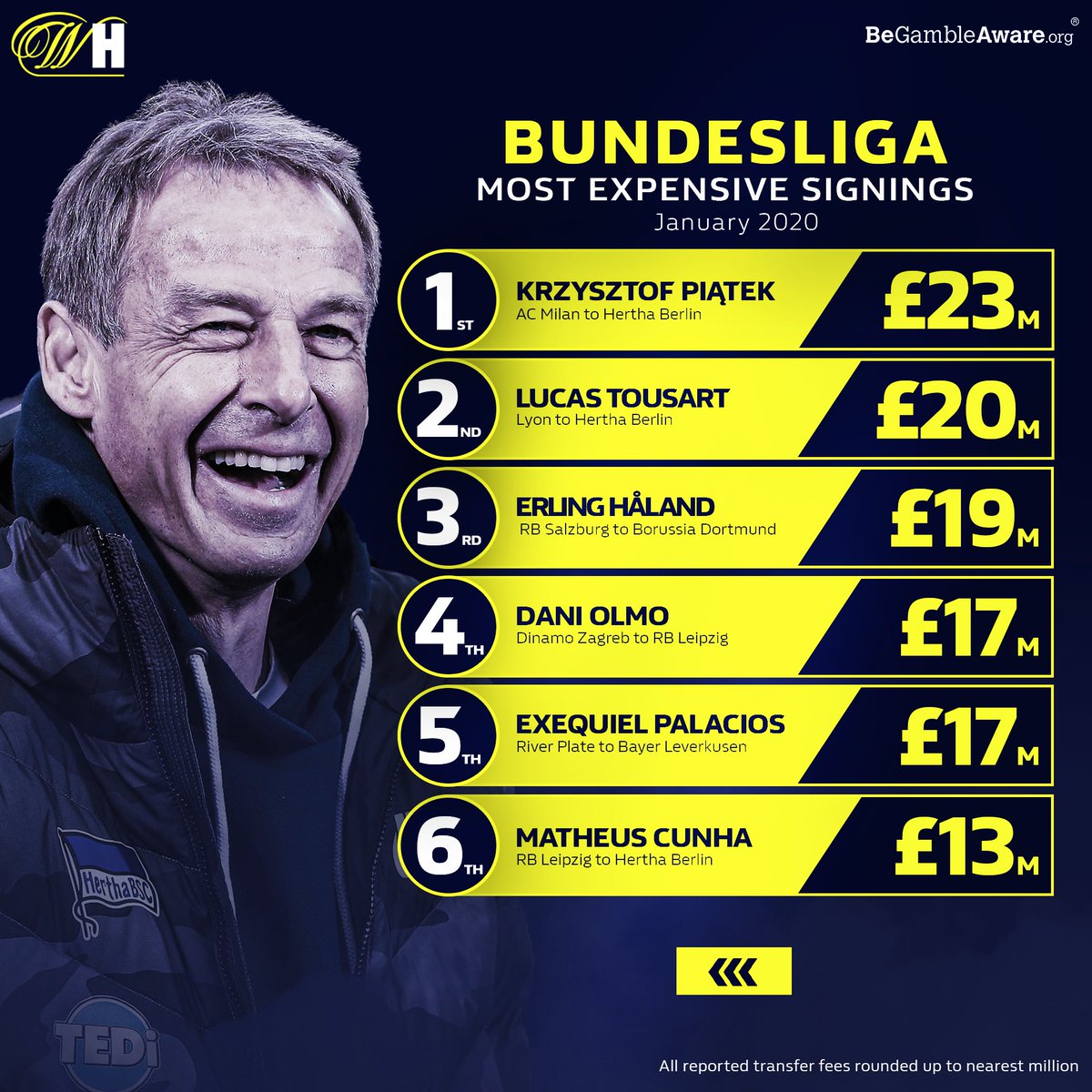 William Hill
WilliamHill
Follow
Hertha Berlin spent more money (£64m) than any other Bundesliga side in the January window.

With a club-record €115 million already invested, a full rebuild is still around the corner. The Old Lady were heavily linked to Granit Xhaka, Mario Goetze and Julian Draxler in German media. Xhaka is set to stay at Arsenal following Mikel Arteta’s appointment. Goetze is lazy journalism. The World Cup winner lost his touch. Hertha cannot indulge themselves in such risks

Draxler, however, could be a shrewd signing. Marius Wolf, on loan from Borussia Dortmund, fails to impress. The Paris Saint-Germain forward can bolster Hertha’s attack and would be easily available. Lack of game time in the City of Light hinders development. He needs a club where he can start. Returning to the Bundesliga to add stardust to Klinsmann's project should do the trick.

Marko Grujic, on loan from Liverpool, should be made permanent at any cost. The 23-year-old Serb enjoys a brilliant Bundesliga campaign as the cornerstone in Hertha’s midfield. With Jordan Henderson, Naby Keita, Fabinho, James Milner and Gini Wijnaldum all jockeying for minutes, the Reds should be amenable to a deal. Anfield sporting director Michael Edwards can be a tough negotiator and may demand a buy-back clause but this is a battle worth fighting.

Two further options suit Hertha’s plans. Freiburg's Janik Haberer is out of contract next summer. He can play anywhere from a number six to an eight or at right-wing or forward. Tall and quick, he's a great squad player who can be theirs on a free while helping in so many ways.

Then there is Stefan Posch. The adaptable defender can play in a three or a four. At 22, his starts match his age through Hoffenheim's first 29 games. An excellent passer, the Austrian international is able to defend in isolated areas, good in 1v1 situations and knows how to hijack passing lanes. Contracted through the 2022/2 campaign, Transfermarkt values him at an affordable €14 million.

The Bundesliga is shedding its reputation as a one-team league this season. In addition to Borussia Dortmund's improvement in the January window, RB Leipzig, Borussia Monchengladbach, and Bayer Leverkusen combine to inject excitement and intrigue into a title race that is usually Bayern Munich swatting aside flies as winter turns to spring. With an ambitious owner, an aggressive manager and some astute investment, Hertha can join the uprising.