How far can the English teams go in Europe?

English football's stature when competing across the continent has only grown over the last few years; culminating in all four teams in both major European finals being Premier League sides. Eventually, Liverpool and Chelsea would scoop the honours, though Tottenham Hotspur and Arsenal will both have the chance for redemption in the 2019/20 campaign.

In total, they'll be seven English teams competing in Europe this term. Manchester City, Liverpool, Chelsea, and Tottenham will take part in the Champions League while Arsenal, Manchester United and Wolverhampton Wanderers will vie for Europa League glory. Seven chances at two trophies with Premier League powerhouses named as overwhelming favourites in both tournaments. You have to like those odds.

The question is, exactly how far can our teams go? Different benchmarks will be set for everyone, though all seven will share the common goal. I guess there's only one place to start, right?

After making back-to-back finals over the last two seasons, Liverpool's dominance in continental competition doesn't look like letting up. Jurgen Klopp's side were worthy winners of the 2018/19 edition though they did it the hard way at times. Their six Champions League titles is by far and away the best in the country. Their goal will be to make it seven this time around.

Although no major signings were made, Alex Oxlade-Chamberlain's return will be a welcome boost, while you'd expect Fabinho and Naby Keita to kick it up another notch now they've had a season to adapt. The question remains, is their squad deep enough to overcome a major injury crisis? Liverpool are serious injuries to Mohamed Salah and Virgil van Dijk away from serious problems. Though, if their stars can keep fit, they've every chance.

Being a pot one side meant the draw was always going to be in their favour. Napoli will be the toughest test, though games against Salzburg and Genk should allow for player rotation. Liverpool will be disappointed if they don't top Group E, thus giving themselves the best chance at further lining the trophy cabinet come May.

Aim: Winning it all, again. 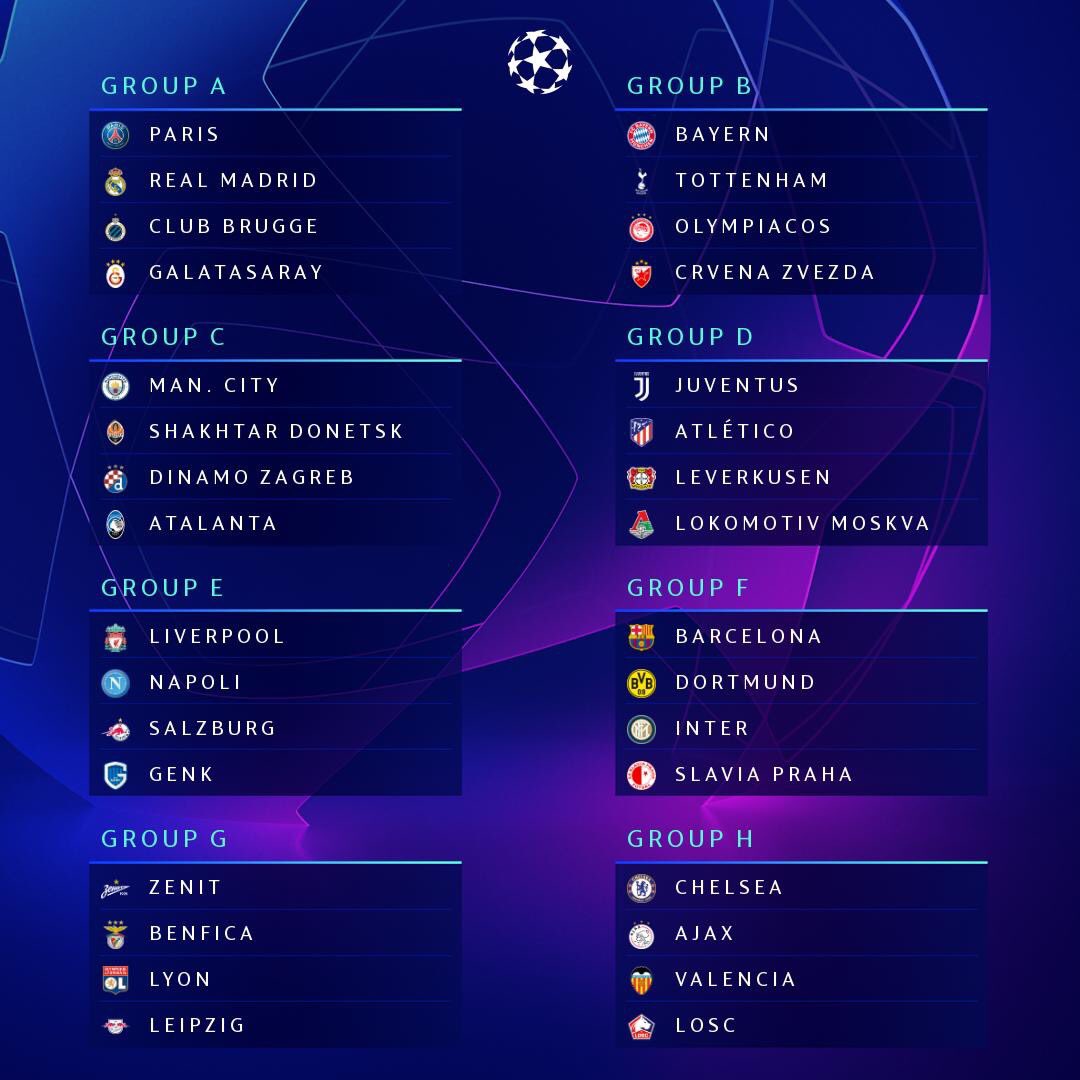 Fresh off Europa League glory and a change in manager, Chelsea's summer was halted by a transfer ban. The inability to add new players to the squad meant a change in direction for 'Super' Frank Lampard. He'd (finally) make use of the outstanding youth facilities available to him at the Cobham Training Ground. Tammy Abraham, Mason Mount and Callum Hudson-Odoi can expect minutes aplenty this term.

Their start to the league season has been, shall we say, mixed, though the promise and progress is clear for all to see. Youngsters will remain inconsistent, that's just natural, but in the long-term, Chelsea will reap the rewards.

Chelsea's group is an interesting one. Like Liverpool, the Londoners came from pot one, though Ajax, last season's semi-finalists, will represent a serious test over two legs. Spanish side Valencia cannot be underestimated, while Lille could be a wildcard despite coming from pot four.

Aim: A quarter-final or semi-final berth would be an outstanding achievement.

Pep Guardiola's side have been truly dominant domestically over the last twelve months; winning every trophy available to them on English soil. The task now is to take their breathtaking brilliance to Europe - where I think it's fair to say they've failed over the last few seasons.

Tough losses to AS Monaco, Liverpool and Tottenham Hotspur in the knockout stages all would have been bitter pills to swallow, though this term represents the chance for redemption. The additions of Rodri and Joao Cancelo could be key - further adding to their brilliant squad depth.

Unsurprisingly, The Cityzens will meet Shakhtar Donetsk (again), with Dinamo Zagreb and Atalanta joining them in Group C. Guardiola's team should have no problems navigating this group and qualifying for the knockout rounds. All eyes will be on the prize and don't be surprised to see City prioritise European football over further domestic glory (should the situation arise where they have to choose). 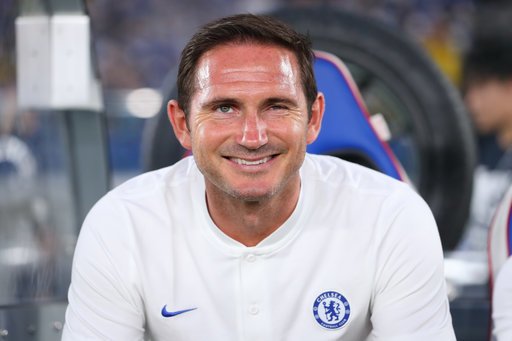 Despite significantly improving their team, stadium and overall outlook under Mauricio Pochettino, Tottenham Hotspur still remain trophyless under the Argentinian mastermind. They came agonisingly close in 18/19 though those two-legged ties against Manchester City and Ajax will forever live long in the memory of Lilywhites fans for all the right reasons.

Somewhat uncharacteristically, Spurs spent big this summer. Tanguy Ndombele oozes class and quality. Ryan Sessegnon will prove to be an astute signing. Giovani Lo Celso on loan could prove to be a masterstroke.

Spurs' group is mixed. They were drawn in pot two so Pochettino was always going to get the chance to go toe-to-toe with a European heavyweight. A trip to Bavaria to take on Bayern Munich is in the offing. Olympiakos and Red Star Belgrade should present an opportunity to win some points and ensure safe passage out of Group B.

With some luck and remaining injury-free in the second-half of the season, Spurs have the credentials to pull off the impossible, though a more realistic aim, presuming they finish as runners-up in their group, would be a quarter-final or semi-final berth.

Aim: Getting back to the final, but this time going all the way.

It's now time to move onto the Champions League's little sibling, the Europa League. Three teams will compete, two have a real shot at winning it all while for the third, it'll be about enjoying the experience and trying to build upon their recent success.

Unai Emery is building something positive at The Emirates and he has a rich history in this competition. I'm sure domestic success will be the number one aim, though European football presents a chance for The Gunners to dip the toes into their excellent fountain of youth.

Despite reportedly only having a small budget, Arsenal spent rather big. David Luiz will be hit and miss, though his experience is vital. Kieran Tierney, though currently out injured, is a major upgrade in the left-back slot. William Saliba will prove his worth next season, though the marquee addition, Nicolas Pepe, has shown glimpses of his brilliance.

Although not extremely difficult, Arsenal probably would have wished for an easier draw. Eintracht Frankfurt is a quality team, Standard Liege won't be easy, either, while Vitoria SC will probably be the groups' whipping boys.

This squad has potential to go deep into the Europa League, with Arsenal hoping that a trip to Gdansk in late-May will be on the cards.

Aim: Going all the way and avenging their final loss last season. 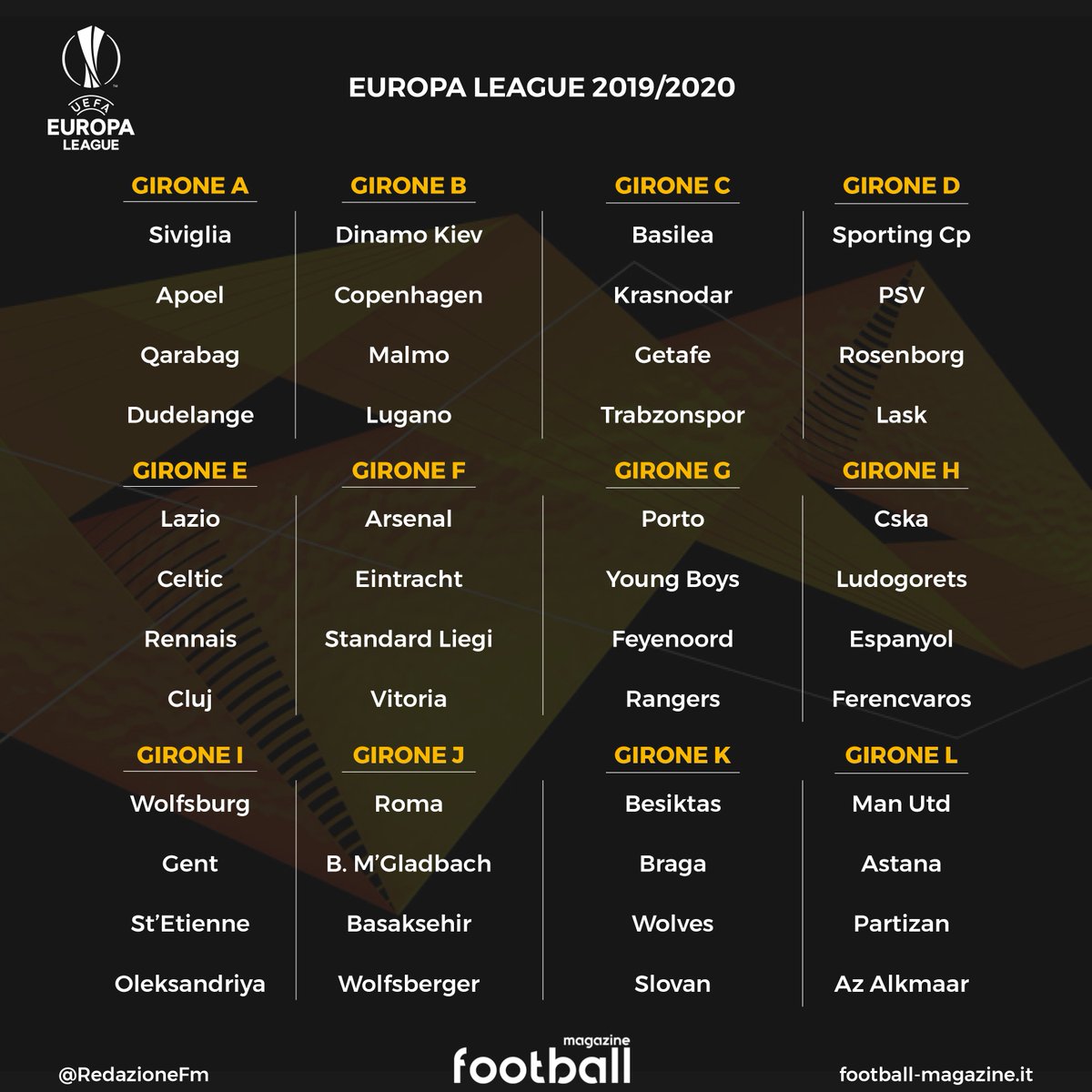 Jose Mourinho gave Manchester United their first Europa League triumph in 2017. The two Champions League campaign proceeding that victory were certainly forgettable, and now the Red Devils find themselves back in the *smaller* tournament. With a thin squad that's only expected to get smaller before Monday's European transfer deadline, the kids will be thrown into the deep end.

With United's league form being patchy at best, continental competition could be a welcome relief. Angel Gomes, Tahith Chong and even James Garner will all be chomping at the bit to impress, while Nemanja Matic, Phil Jones and many others will be firmly focused on forcing their way back into Ole Gunnar Solskjaer's first-team plans.

United have been offered smooth passage into the knockout rounds, being drawn against Astana, FK Partizan and AZ Alkmaar, though the travelling could become an issue - particularly over the hectic winter period.

With a little luck combined with Solskjaer ironing out silly mistakes, United have every chance to go all the way. They're favourites for a reason and they should top the group with relative ease. It all depends on what teams drop out of the Champions League because if they come up against a semi-decent side, their unpredictability could cost them.

Nuno Espirito Santo is an absolute genius, isn't he? I know Wolves have spent big over the last few seasons, but he's assembled an excellent, perhaps a tad underrated squad that suits his playing style perfectly. After coming through the qualification rounds which started in July for them, Wolves sealed their place in the Europa League group stage just last night - beating Torino over two legs.

Their squad has been tinkered with this summer, with more depth added in preparation for their European exploits. Patrick Cutrone is the wildcard while securing the signings of Raul Jimenez and Leander Dendoncker on permanent deals is vital.

Being in pot three was always going to throw up problems for Wolves. Two games against Slovan Bratislava should be six points in the bag, though matches against Besiktas and Braga won't be easy. If Wolves can make Molineux a fortress, perhaps they can sneak into the knockout phase and cause a few more upsets?

Aim: Progressing through the group, giving a good account of themselves and seeing how far they can go.