It was a sign of what was to come when Leroy Sane suffered a long-term injury just 12 minutes into Manchester City’s first game of the season. So far, treatment table woes have been the story for Pep Guardiola as several key players have suffered varying degrees of injury -  which has led to The Cityzens playing second fiddle to Liverpool in the Premier League title race early on.

Aymeric Laporte, Kevin De Bruyne, Benjamin Mendy and Oleksandr Zinchenko have all had injury concerns this season. The latest player to add to City's fitness woes is summer signing Rodrigo.

Brought in from Atletico Madrid as a long-term replacement for Fernandinho, the Spaniard has become a key player at the Etihad Stadium. In 2019/20, the 23-year-old is the only name to feature in all of City’s matches across three different competitions; which underlines his importance to the side. His versatility also gives him an edge in the team, which immediately made him a favourite for his new manager.

He has proved his value by not only excelling in his preferred defensive-midfield position, but also being able to fill in at the centre of defence. The long-term absence of key defender, Aymeric Laporte, has left Guardiola short-handed in the position as former captain Vincent Kompany was not directly replaced after departing in the summer. With John Stones also spending time sidelined along the way, only Nicolas Otamendi was left standing as the only natural centre-back in the squad.

However, Rodrigo’s hamstring injury in the Champions League against Atalanta could rule him out of action for between two-to-three weeks. This may pose even more serious problems for the reigning Premier League champions as they look to make it three titles on the bounce. 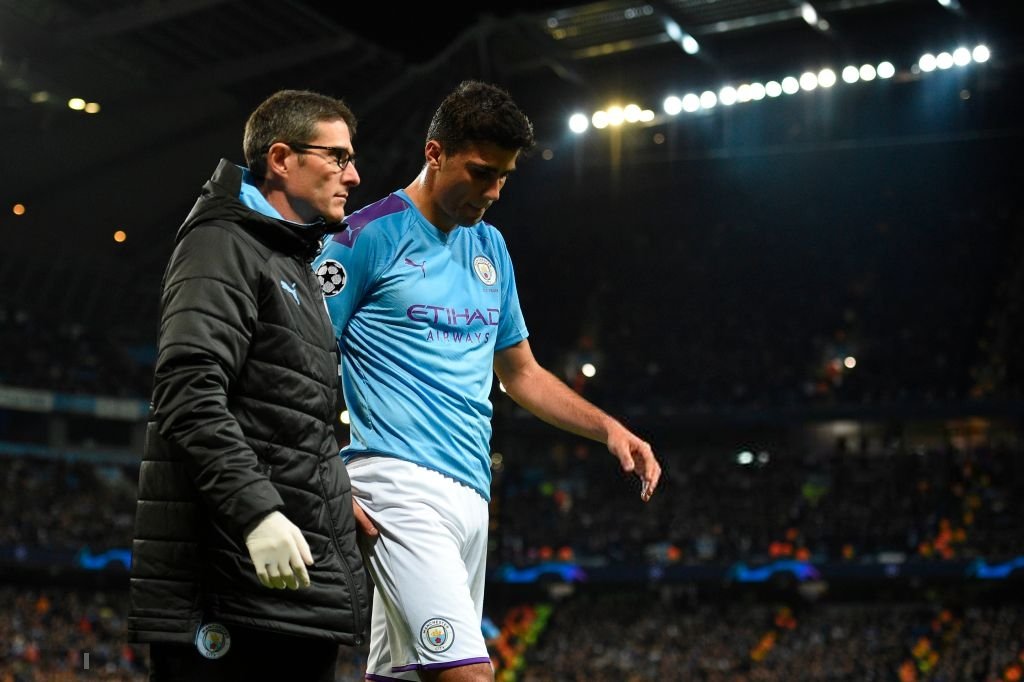 Man City | Superbia
SuperbiaProeIia
Follow
Pep Guardiola says the Rodri hamstring injury will hopefully be 10 days, but could be 3-4 weeks.

That’s especially the case given the fact that Guardiola’s men cannot afford to drop any more points in the league with Liverpool giving it full throttle. Jurgen Klopp’s side drew with Manchester United in their last game but those two points are the only ones lost so far, resulting in a six-point lead atop the table.

Fortunately for Guardiola, the next four games will be against sides that shouldn't really cause problems for the Sky Blues. Then again, nobody thought Norwich City would hurt City and they did. Yet, after what has already transpired, games against Aston Villa, Southampton (whom they face back-to-back in the League Cup and Premier League) as well as Atalanta must be attended to with due diligence.

There's still enough quality in the team to maintain a winning run within the period even with Rodrigo's absence, particularly with Stones returning to full fitness. The Englishman will most likely partner Otamendi in defence, allowing the ever-brilliant Fernandinho to make his midfield return. That should stabilise the side considerably heading into the jam-packed festive period.

City's next 'big' game is a Premier League clash with Liverpool on November 10th. Unless the injury is later found to be more serious than expected, or his recovery is slower than anticipated, Rodrigo will be back to up to speed before then, and it's a game Guardiola is going to need the 23-year-old in.

If he does return in time to feature, then his absence shouldn't be too hard-felt. So in a sense, the injury came at a good time if that makes sense. City will do just fine without their key midfielder. Whether they can close the gap on a rampant Liverpool is another matter entirely.