How will Tottenham cope without Harry Kane?

As the full-time whistle blew on the recent Premier League encounter between Tottenham Hotspur and Manchester United, Spurs fans could be forgiven if their thoughts weren’t entirely on the result. Tottenham lost the game by one goal to nil courtesy of a Marcus Rashford strike late in the first half but the sight of Harry Kane holding his ankle before gingerly getting up and hobbling down the Wembley tunnel accompanied by the physio was one no Spurs fan wanted to behold.

Fans waited with bated breath as the England captain underwent scans just two days later. Diagnosis? Ligament damage and a lay off until at least March.

Kane may miss up to 11 games, if not more. Both legs of the Champions League last 16 tie against Bundesliga leaders Borussia Dortmund make the list. So does the second leg of the League Cup semi-final against Chelsea and, should they get there, the League Cup final. Premier League games versus Chelsea and Arsenal will be one Harry short. With Heung-min Son currently at the Asia Cup with South Korea, the injury couldn’t have come at a worse time for Mauricio Pochettino’s men.

In addition, fans must now wait on news regarding Dele Alli's hamstring. The midfileder clutched the back of his thigh as he crashed into the hoardings at Craven Cottage in Sunday's match against Fulham. At least the result was better than against United. The other Harry [Winks] snatched all three points from the game Cottagers in stoppage time's final minute with a running header.

Unsurprisingly, Kane will be a big miss. The 25-year-old has won the Premier League Golden Boot twice in the last three seasons. Just like he is for the national team, Kane is Spurs' constant source of goals at Wembley. Losing such a pivotal figure in the team is bound to have an effect.

This has happened before. Kane has now damaged ankle ligaments four times in as many seasons. The longest lay-off came in September 2016, when the striker missed 11 matches. Shorter stints on the sideline followed in March of 2017 and 2018.

Tottenham’s record without their main man is quite surprising. Kane missed a total of 15 games due to ankle injuries. The LilyWhites won nine, drew four and lost just two. Still, you can't blame supporters if those figures don't draw sage nods and a few knowing Winks. 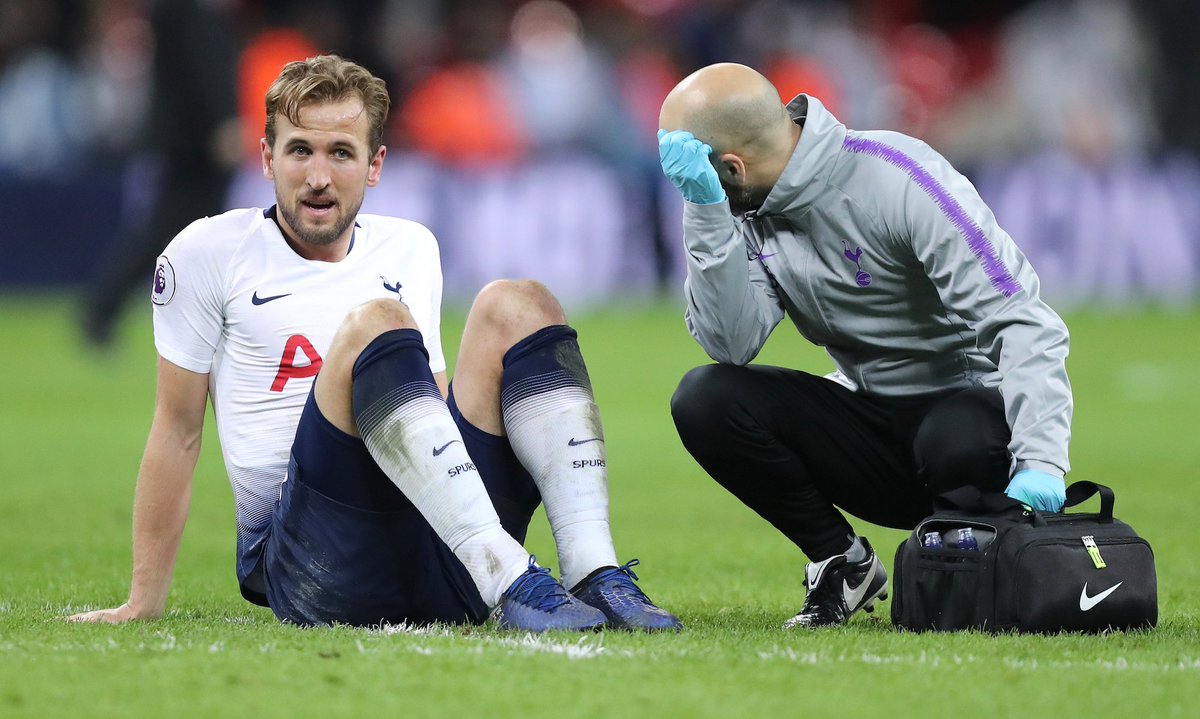 Tottenham Hotspur
SpursOfficial
Follow
Following preliminary assessments, we can confirm that @HKane has damaged ligaments in his left ankle, sustained during Sunday's match.

With both Kane and Son unavailable for the next few weeks, the question is who will provide the goals for Pochettino?

Fernando Llorente and Victor Janssen are the only recognised strikers but the manager firmly ruled Janssen's return. Llorente remains the only striking option in the senior team. Far from first-choice since his arrival in the capital, the Basque striker was given his first Premier League start of the season against Fulham on Sunday. He scored albeit into the wrong goal. Desperate to make amends, he put too much pressure on himself, missing two clear chances in the second half.

Playing a healthy Dele Alli or Erik Lamela as a false nine is another option. The situation may be the ideal chance to promote a youth player. Kazaiah Sterling and Shayon Harrison have been scoring goals in Premier League 2.

Although it seems extremely unlikely, there remains a chance to do business in the transfer window. Of course, hindsight being 20/20, questions arise as to why Tottenham conducted no summer business, the only Premier League team ever to abstain from the market since it opened in 2003.

Without Kane, Spurs' options in the attacking third are limited but it’s a catch 22. No one of comparable quality would sit on the bench waiting for the England man to come up lame. Is it worth spending £50-60 million on a striker who won’t be first-choice and won't stick around, just in case Kane gets injured?

Tottenham must step up and prove they are not a one-man team. The last gasp win against Fulham will serve as a confidence boost, proof positive other players can step up when push comes to shove. Big games, both domestically and in Europe, lie ahead. Spurs' performance without their star will be the difference between a successful season and a disappointing one.