Always on the lookout for the next English gems to add to his team, Gareth Southgate should be seriously considering some Sheffield United players. Chris Wilder's team has been the revelation of the season defying the odds to make a mark in the Premier League. At a time when Norwich and Aston Villa, who also joined the top flight this term are struggling for survival, the Blades are pushing for a European place. Therefore, it's understandable if several Blades players are on Gareth Southgate's radar by now. Prominent among them, goalkeeper Dean Henderson.

The young Manchester United shot-stopper has been on loan at the South Yorkshire club since 2018/19 season and was ever-present in goal helping the side gain promotion to the Premier League. Keeping the most clean sheets behind only runaway leaders Liverpool in the league this season puts the spotlight not just on the Blades' defence but on the goalkeeper directly. Apart from a costly error against the Merseysiders when the sides met at Bramall Lane back in September that cost his team three points, the 22-year-old has been in superb form all season.

Good communication, anticipation, agility, reflexes and an ability to pull off top saves. Those are the qualities of a top-class goalkeeper. Young Henderson has them all, and then some. Sprinkle in some arrogance, too. At least that's what he was accused of along with some other teammates by FA technical director Les Reed after England’s disastrous European U-21 Championship campaign last summer. But the Whitehaven-born shot-stopper has long put the disappointing outing behind him to stake a claim for being amongst the best in the game at the moment.

Speaking of arrogance, he stated at the beginning of the campaign that he is good enough to play for Manchester United now and that he was going to use his performance for Sheffield United to prove it. He has so far backed up his talk with action. The 22-year-old ranks amongst the Premier League's top goalkeepers at this moment. By performance metrics, he easily ranks ahead of David De Gea and Jordan Pickford. 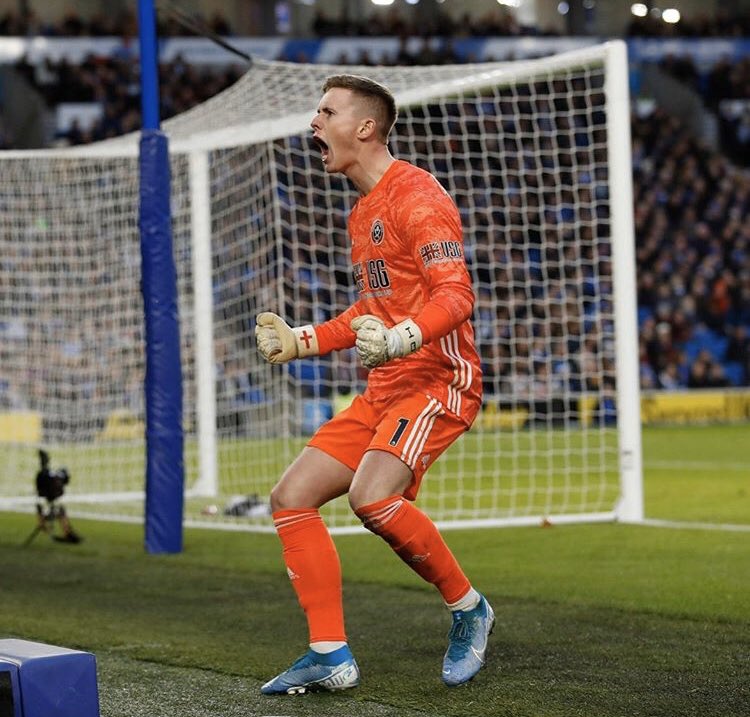 Statman Dave
StatmanDave
Follow
Of the 15 goalkeepers that have made 50+ saves in the Premier League this season, Dean Henderson has the highest save percentage (74.32%).

Both have suffered a dip in form recently. Manchester United handed De Gea a six-year contract worth around £117million last summer. That made the 29-year-old the highest paid goalkeeper in world football. Dropping him to the bench for a new hotshot is highly unlikely. Regardless of the number of high profile blunders the Spaniard has made that have cost United this season, he will remain the undisputed number 1 at Old Trafford for the foreseeable future. His experience and standing in the game still put him ahead of Henderson in the pecking order.

But the same cannot be said of Pickford. Although trusted by Southgate, the Everton man has not really had strong competition for the England number one spot since Joe Hart vacated the position. But with his performance for Everton this season leaving much to be desired on several occasions while Henderson's stock is continuously rising, a shakeup may be approaching.

Henderson is arguably better than Tom Heaton, better than Nick Pope, and may even already be better than Pickford. Certainly, on current form. But he will need an opportunity to show he can replicate his club form with the national team.

Usually, players show the stuff they're made of against top sides. The 22-year-old made a huge statement in that regard when his side squared up against Manchester City. He pulled up several world-class saves to keep Pep Guardiola's team at bay. He even saved a penalty to keep his team in the game. Wilder's men finally succumbed to a 1-0 defeat. But with such a display against the most potent attack in the division the loanee has demonstrated a readiness to perform at the biggest stage.

Speaking of which, few compare to the upcoming European championship. Henderson may prove to be Southgate's joker if given the chance. The fact that he was given a maiden call-up to the Three Lions last October shows becoming an important member of the squad will only be a matter of time.