Is it time for La Liga to take Granada seriously?

Three plots are almost certain in La Liga. Barcelona, Atletico Madrid and Real Madrid jostling for the title. Lionel Messi topping the scorers' chart and Granada being relegated or somehow surviving at the death. This season, though, the Andalusian club is breaking new grounds.

There are very few sides who have shuttled around the lower leagues as frequently as Granada. The unfancied Rojiblancos boast a King’s Cup albeit having spent the majority of its history lost in the obscure leagues. After an initial promotion to La Liga in 1941, the club has been back to the Spanish top-tier just four times.

On three of those occasions, they seemed unready. Granada never finished higher than eighth. Although El Grana never suffered relegation on their La Liga returns, they have never enjoyed five uninterrupted seasons at the top. Sometimes two, best case four and then they are back to familiar territory...

Diego Martinez's team was expected to continue that trend. After all, eleven of the last 15 teams promoted to La Liga managed to secure another year. After seven rounds of matches, it isn’t just about survival for the 38-year-old, his side is rubbing shoulders with the top dogs.

Granada is punching above their weight. Saturday's early victory over Leganes pushed them, albeit temporarily, to the summit of the league. Real reclaimed top spot with a stalemate in the Madrid derby. With 15 points, Zinedine Zidane’s men are just one better with the Andalusian Rojiblancos who are superior on goals. The club has never started better.

Martinez brought radical changes to Nuevo Los Cármenes. Without a robust resume, he is desperate to make a name after failing in his first major role at Osasuna. He achieved promotion in one year, skilfully managed his squad, squeezing the very best out of his players and making the collective stronger than the sum of its parts. 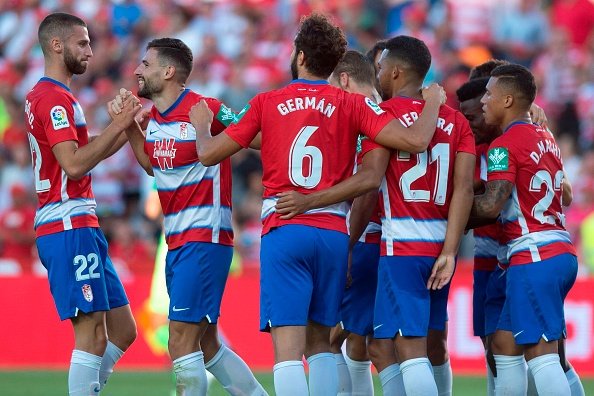 OptaJose
OptaJose
Follow
14 - Granada have won 14 points from seven #LaLiga games this season, their best ever start to a top-flight season. Outstanding

The 38-year-old has given his side an identity. He built upon a sturdy defensive unit that conceded just 28 times last term and didn't go more than two games without winning. They are yet to lose by more than a single goal across almost 50 matches with Martinez at the helm.

This formed the foundation for success thus far. They began the campaign with a 4-4 thriller at Villarreal,  then suffered a depressing home loss to Sevilla. Three successive victories followed, twice on the road and at home against Barcelona. Real Valladolid was fortunate to snatch a point in their own backyard while Leganes' recent visit was futile.

Martinez trains his team to be chameleonic, varying their approach according to the circumstances of each match. Granada is comfortable pressing further up the pitch and can go back into their shells if need be. There are no superstar names in the squad. Everyone fights for the team. Leading scorer Antonio Puertas has just three.

This is unfamiliar territory for Granada. They are tied on points with Atletico Madrid albeit flaunting a better goal difference. Reigning champions Barcelona are one adrift. Traditional sides Villarreal, Sevilla, Valencia and Atletic Bilbao are all off the pace. Another superb outing against Real Betis on Friday would again move Martinez's team to the summit.

It is still early days, though, and no one at Granada will be getting carried away. But Rojiblancos has shown themselves to have a united enough toolbox to suggest they can make a good fight of remaining in the top flight. They should be taken seriously.