Is Jordan Ayew taking the shine off Wilfried Zaha?

With 10 goals and five assists in the Premier League last season, Wilfried Zaha was the main man at Crystal Palace. The Ivory Coast international featured in 34 league matches for the Eagles, underlining his importance to the team. His efforts helped the London side secure a 12th-place finish. This was far from what the club had become used to in recent times after narrowly escaping relegation on a number of occasions.

The 26-year-old had become so influential in helping the team win games that clubs began to circulate for his signature. Arsenal and Everton emerged as strong favourites to land the former Manchester United winger, but Crystal Palace did everything possible to make the transfer difficult - if not impossible. The most effective was demanding a cut-throat price that scared the suitors away.

Meanwhile last season, Jordan Ayew had been at the club on loan from relegated Swansea. His performances for the side wasn't great, but he did enough to convince manager Roy Hodgson he could do more. Ayew's deal was made permanent in the summer and the 28-year-old has been on a mission to convince the manager he made the right decision.

At a time when Zaha is still weighed down with the thoughts of what could have been, Ayew has stepped up to fill the goalscoring void. His three strikes in seven league games so far have delivered nine points. His winner against West Ham on Saturday took the Eagles (albeit temporarily) to fourth in the league table before the likes of Chelsea and Arsenal took to the field. So far, his goals make up 37.5% of Palace's total (eight) this season. 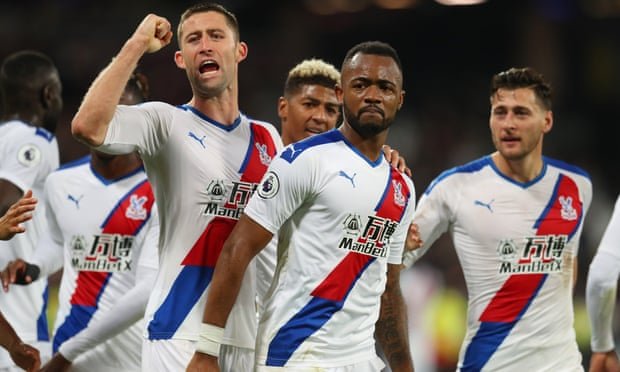 Yet to find the back of the net this time around, Zaha, who was last season's hero, has been just another squad member. Of course, the winger still has it in him to carry the team in difficult moments and help grind out results. But for the time being, the club faithful has found a new hero. For a player that hit the back of the net just once for the side last term, Ayew may have chosen the perfect time to hit top form.

All Ayew has to do is keep up the good work all season and Palace could enjoy one of their best campaigns in the top flight to date. It's still very early in the day, but who knows? With the side placed sixth in the standings, Hodgson's men could pull off a major surprise. The Englishman has finally built a team strong enough to hold its own in the league. Despite losing Aaron Wan-Bissaka to Manchester United in the summer, players like Patrick van Aarnolt, Luka Milevojevic, Andros Townsend and Jeffrey Schlupp have been in top form from the get-go.

The defence has also been solid with the addition of former Chelsea captain Gary Cahill to the group. Getting such a player with Premier League class and leadership experience on a free was savvy business indeed. But perhaps it's the £2.5 million paid for Ayew that really looks like a steal. The Ghana international has always been a good player turning out for several clubs both in France and England. But he appears to have found his best form now.

That will delight Palace fans, who are tired of watching their team struggle continuously in the division. As long as Ayew keeps scoring, the struggles will remain a thing of the past. The Ghanian will also be the centre of attention, taking the shine off Zaha. That could also be a blessing in another way for the club as the interest from several quarters in the winger will wane, allowing him to concentrate on giving his best to the side...