Is pressure getting the better of Steven Gerrard at Rangers?

Steven Gerrard could have transitioned into football management straight after ending his playing career in November 2016. The Liverpool legend had an interview for the vacant managerial post at League One club Milton Keynes Dons, but later passed up the opportunity saying that he was not ready for the role. It wasn't until 2018 before the scouse legend stepped up from Liverpool Under-19 to take over at Scottish Premier League side Rangers.

Since taking over, the 39-year-old has done a great job at helping Rangers get back to a position where the club now provides good competition for the dominant team in the land - Celtic. But the Gers have failed to stop the Bhoys from claiming every trophy on offer. Brendan Rodgers orchestrated the dominance for several years, and then suddenly realised it wasn't much fun. He abandoned the side once an opportunity to manage in the Premier League arose.

The Northern Irishman is on the verge of leading Leicester City back to the Champions League. But the man that took over from him, Neil Lennon, has kept the flag flying. The Hoops still reign supreme and that seems to be driving Gerrard nuts. The former midfield maestro may not have won the Premier League title in his time as a player at Anfield, but he won several trophies nonetheless. That habit is difficult to shake off unless you're Steve Bruce or Mark Hughes.

For Gerrard, going three seasons as a manager without winning any kind of silverware is unacceptable. Although the team recently knocked out Portuguese side Sporting Braga to make it to the last 16 of the Europa League, not much is expected from the team moving forward. Gerrard reckons Rangers have already punched above their weight. Getting past German side Bayer Leverkusen in the next round could definitely prove to be a step too far. 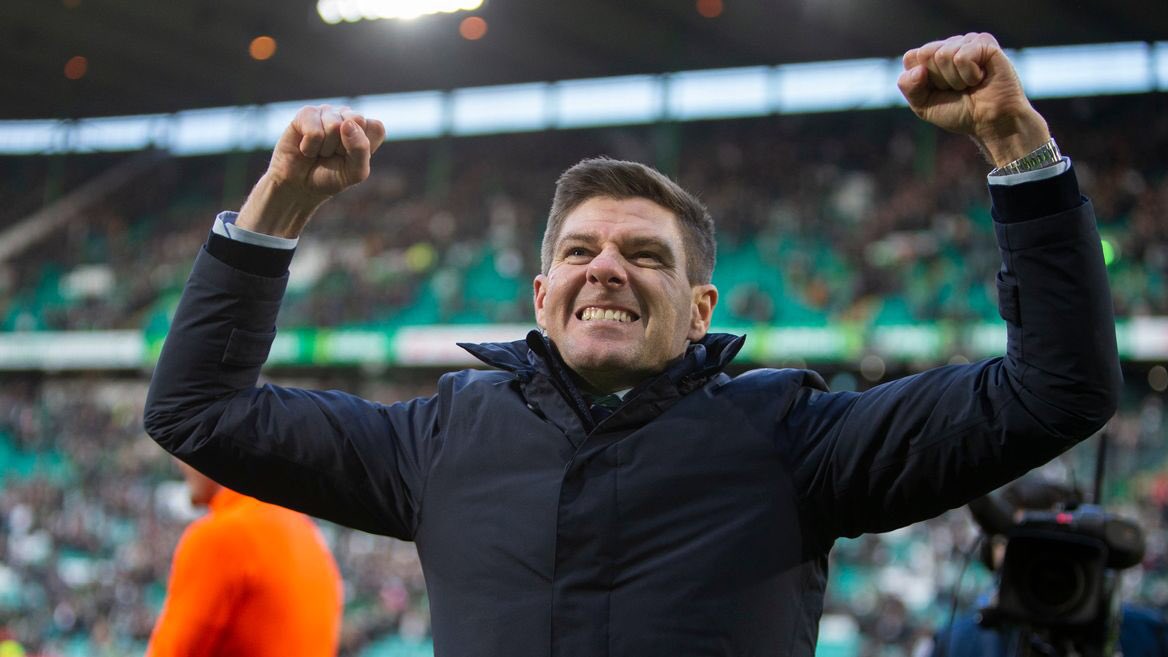 But there are low hanging fruits like the domestic Cup and league title. The club started the season pretty well. Level on points with Celtic at the top of the table after 12 rounds of matches, one could forgive the Teddy Bears' fans who began to dream of finally lifting another league title. Unfortunately, things have not gone according to plan. Rangers have capitulated badly since then and are now 12 points behind their bitter rivals in the title race.

With just five matches left to play (ten including the second phase), it's unlikely the Bhoys will relinquish top spot at season's end despite having played a game more than their rivals.

The Scottish Cup was then the last hope of securing silverware for Gerrard and his charges this term. Except that the team got knocked out of the competition by Hearts over the weekend. The English manager took it hard, saying after the game he would examine his position afterwards. Pressed further on if he was given up his position at the club, he insisted that he was going to think about it. To him, spending three years on the job with no piece of silverware to show for his efforts was unacceptable.

But where can he go from here if he decides to leave?

Having spent almost all of his playing career in the Premier League, this should be the best place to test himself against the best in the dugout. But it will be difficult to find a club, aside from Liverpool, that splashes the cash and makes it easy to secure silverware. Even though he has been tipped to one day land the Anfield job, now is not the time. Jurgen Klopp is doing big things at the club at the moment, he's going nowhere.

Leicester, Arsenal and Tottenham are all occupied, but the latter club could be available if Jose Mourinho doesn't take the team to Europe at the end of the season. Another option will be to take a job at a mid-table team and propel the club to Europe like former boss Rodgers is doing with Leicester City. The relative success attained at Rangers despite the meager resources available for transfers is an indication he would succeed in the English top flight. But he must first learn to deal with pressure at Rangers...

The second of a six-part series taking a look at the long term future of Scottish football. Part One: Fan owned revolution. When Scotland opened its pyramid system to promotion…