Amid the whole Moise Kean saga, Juventus can seal an eighth straight Scudetto with a victory over AC Milan today and a Napoli defeat to Genoa tomorrow. On 81 points, the Old Lady is 18 above Gli Azzurri. Eight games remain.

Juve's hegemony appeared ready to break last term. Maurizio Sarri’s Napoli almost halted the run with an Aprill 22nd 1-0 victory at the Allianz Stadium. The next week they surrendered three goals to Fiorentina and the dream died. Carlo Ancelotti’s arrival had people believing the Partonepei could make another run but the Old Lady was an early riser in 2018/19. After surviving a Match Day 1 scare at the Bentegodi against Chievo, she never looked back.

After 30 matches, the Northern side is on the cusp of writing history. Somehow, 34-year-old Cristiano Ronaldo’s Italian invasion coupled with 31-year-old Leonardo Bonucci's return from a year's exile at San Siro breathed freshness into the squad. The Bianconeri suffered defeat only once in Serie A, scoring 63 goals, conceding 19.

In the final third, Ronaldo proved influential in a third league. The Portuguese machine produces nearly a third of the Zebra's goals. When manager Massimiliano Allegri rested him, Moise Kean stepped into the void. The fast-rising 19-year-old buried four goals and uncovered another in just 209 Serie A minutes.

Not everyone was impressed. The Italian of Ivorian heritage endured racial abuse during his most recent appearance against Cagliari. The vitriol was so pervasive, I Rossoblu captain Luca Ceppetelli intervened, pleading with fans to stop. Jeered throughout the game regardless, Kean turned in Rodrigo Betancur's cross with five minutes left, then stood in front of the home fans with arms wide open.

That incident sparked outrage beyond Italy, especially after Leonardo Bonucci suggested his teammate was partly to blame. The 31-year-old opened the scoring on the night. If the remark created a crack in Turin, Milan's visit is enough reason to put it aside.

Bonucci's personal Elba seek to consolidate a top four spot to qualify for the Champions League for the first time since 2013. Gennaro Gattuso's side hold a one-point lead over Atalanta. The gap between the Rossoneri and Lazio, Roma and Torino is four, with the Biancocelesti claiming a game in hand. There's no margin for error. 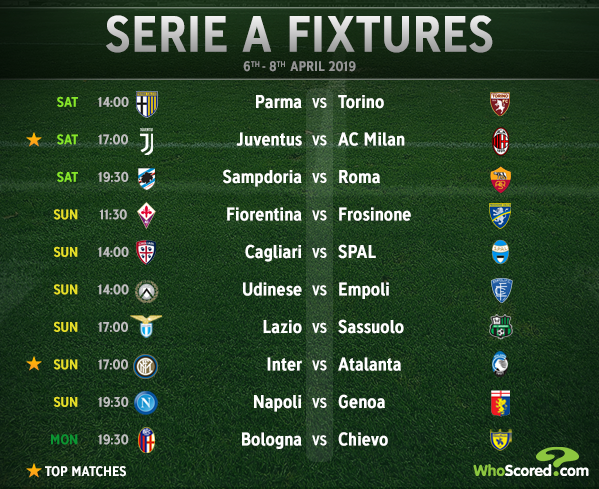 WhoScored.com
WhoScored
Follow
🇮🇹 Juventus would be crowned champions this weekend if they beat AC Milan and Napoli lose to Genoa, but @jacopopiotto believes it'll be another week before the Old Lady sings

The Screwdrivers can't seem to find their grip. Winless in three, Milan are stumbling towards season's end. Following a close defeat to Inter in the Derby della Madonnina, they lost to Sampdoria then dropped two points at home to Udinese.

Meanwhile Juve cruise, winning all but two of their last 10 games. The most recent defeat came recently against Genoa - but Allegri's warriors bounced back with successive victories. The Rossoneri are a test but one the veteran group can pass.

Juventus dominated this fixture in recent years, victorious 16 times in the last 18 encounters across all competitions. The Rossoneri's last win was in 2016.

One thing is different this time. The visitors have their own young sensation. Since arriving from Genoa in the January transfer window, 23-year-old Krzysztof Piatek has struck for seven goals. The Pole's last strike came midweek against Udinese.

Both squads are steeped in talent, however. It will be a fight no matter who the managers send out.