Bayer Leverkusen have a fabled reputation when it comes to developing brilliant midfielders in Germany; Michael Ballack, Toni Kroos and Arturo Vidal are amongst those in recent years. New manager, Peter Bosz, has given a new attacking identity to the team with talents like Leon Bailey, Kevin Volland, Kai Havertz, Karim Bellarabi and Julian Brandt in a classic 4-3-3 formation. Out of which, Havertz stands apart.

Coming through the youth ranks, Havertz is the youngest goalscorer for the club in the league. He made his debut in the 2016-17 season and became a starter for the Bundesliga side at the tender age of 17.  Last season, more of his qualities were revealed. Comparisons were drawn to Mesut Ozil due to his exceptional vision and two-footed play. This term, even when former manager Heiko Herrlich was in charge, Havertz enjoyed a free role just behind Lucas Alario in a 4-2-3-1 setup. He is the only Leverkusen player to have started all the 22 games in the Bundesliga; showing himself as the cornerstone of the side.

The German is a true midfielder who is tremendously versatile. He can play as a central-midfielder or defensive midfielder, he shines when allowed to roam into the attacking third. Havertz's adept dribbling ability helps him to glide past defenders and attract fouls when deployed in an advanced position, he's similar to an Eden Hazard in full-flow in that regard. His movement is savvy which makes his presence is a constant threat to the opposition. Havertz positions himself brilliantly and provides penetrating balls with stellar vision. Standing at 6'1, he blends his technical ability with physicality which makes him the fulcrum of the midfield. The 19-year-old's anticipation helps him to intercept tight passes which, in turn, instigates attacks. His quick feet and long legs are perfect for the team's counter-attacking approach and are extremely impactful in transitional situations.

Whenever Havertz receives the ball, his strong aesthetic allows him to open a wide array of passing options. It reminds me of Paul Pogba. Taking more than two shots per 90, he has a voracious appetite for goals. This was not something you would have found in a 17-year-old Havertz. It shows how actively he is improving himself.

Havertz is immensely clinical and knows how to carve opportunities when available. His keenness to get into dangerous situations and creates a shooting chance shows how highly he thinks of himself, which is another trait needed to go right the way to the top. His brace against Werder Bremen in a 6-2 away win illustrates it. Whether he plays as a six, eight or a ten, he operates at full throttle.

However, he struggles to shield the ball, dictate play from the back and hold on to the ball when given more defensive responsibilities. He gets dispossessed two times per game. The teenager can even work a little bit on his first touch as it will help him make better decisions. But, at this age, there is a massive margin of potential still left to ponder. Long story short, he can pass, dribble, intercept, tackle and get forward. The Aachen-born youngster has everything to become a world-class midfielder.

He has earned praises from top to bottom.

I’ve never seen such a complete player at his age.--club captain Luras Bender

He’s so talented he has the right stuff to become a world star.--Brandt

Kai has exceptional abilities and is already blessed with a footballing maturity that sets him apart from other players of his age.--Sporting Director Rudi Voller.

Havertz is in red-hot form. His goal tally this season is nine, more than any of his teammates. He made his 75th Bundesliga appearance 2-0 win against Dusseldorf which saw Die Werkself climbing up the table. Currently placed fifth, with a little bit of more effort Bosz can take his young bunch of attacking players to Champions League next season. 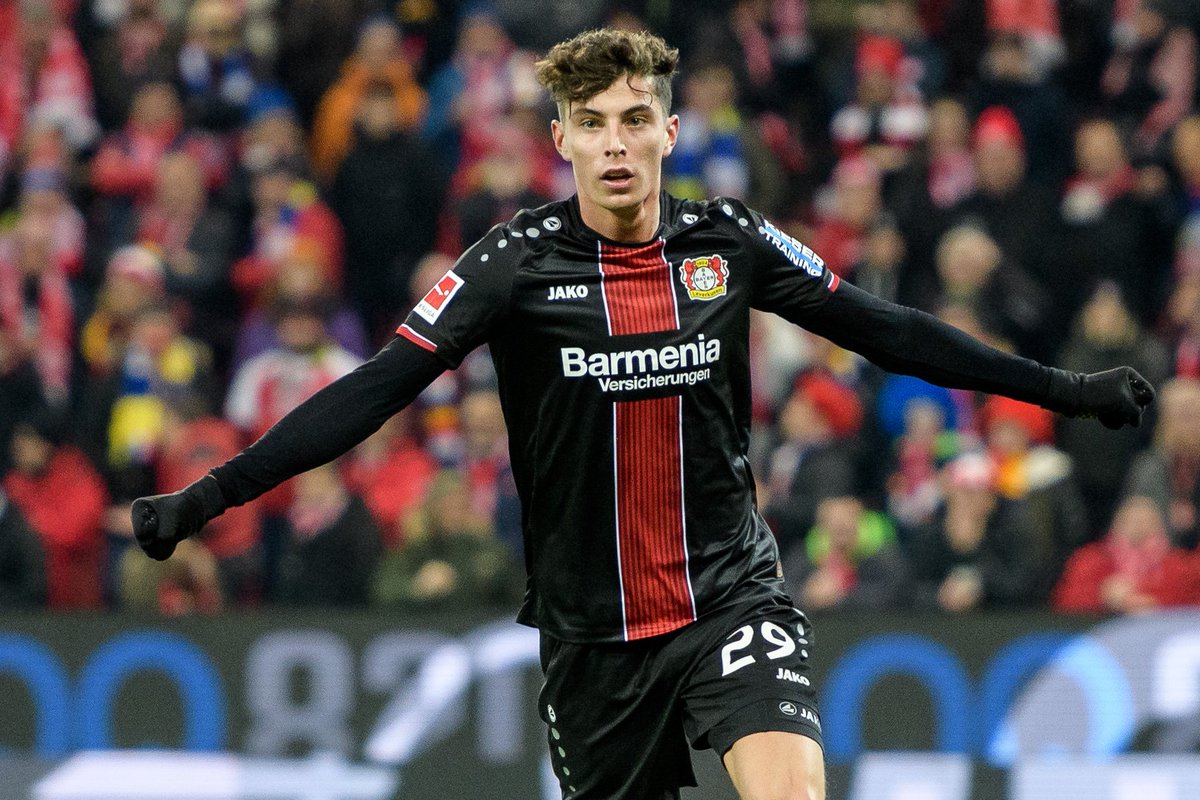 Still just 19-years-old, he is one of the best teenage talents in Europe right now. According to Transfermarkt, he is worth a whopping €65m. Rumours have linked him to Premier League club Arsenal as potential Ozil replacement in recent times. His contract runs until 2022 and it is not long the bigger clubs will be offering large sums for this young prodigy. Havertz has not made a comment about his future publicly but he won't shy away from taking a step ahead in his career. Wherever he goes, the players alongside him will be benefitted from his dynamic skill set.