By Jamie Kynaston
British Football Cardiff City Championship Elland Road Kalvin Philips Leeds United Pierre Michel Lasogga Samuel Saiz Sheffield United Slider Articles Thomas Christiansen
For a number of weeks, we witnessed an acute demise of Leeds United. After what had been an incredible start to the season they went on a three-game losing streak. That all changed last weekend though, as Thomas Christiansen's side returned to winning ways in the Championship.
Leeds United started their season seven games unbeaten, with five of those fixtures ending as wins. They even managed to go six games without even conceding a single goal. It was all plane-sailing until they played Millwall away. A 1-0 loss brought reality back as fans witnessed their first loss of the season.

Their next game was a 3-2 win against Ipswich, getting back on track but more notably, starting to concede goals. This was not like the Leeds United side that had started the season in fine form. Something after the Ipswich game would alter Leeds' season as they had been top of the table for some time.

It wasn't until the away game at Cardiff that Leeds United were really put to the test. A 3-1 loss and down to ten men, the Whites now knew how this season might go. The next game at Sheffield Wednesday ended up as a 3-0 loss. After that, Reading beat Leeds 1-0 at Elland Road. Something wasn't right.

However, last weekend Leeds travelled to Bristol City. Samuel Saiz bagged a brace inside the first 15 minutes and Pierre-Michel Lasogga ended up on the score sheet. Leeds emerged the 3-0 victors, after such a poor run and against a team who hadn't lost in their previous 10 league games. 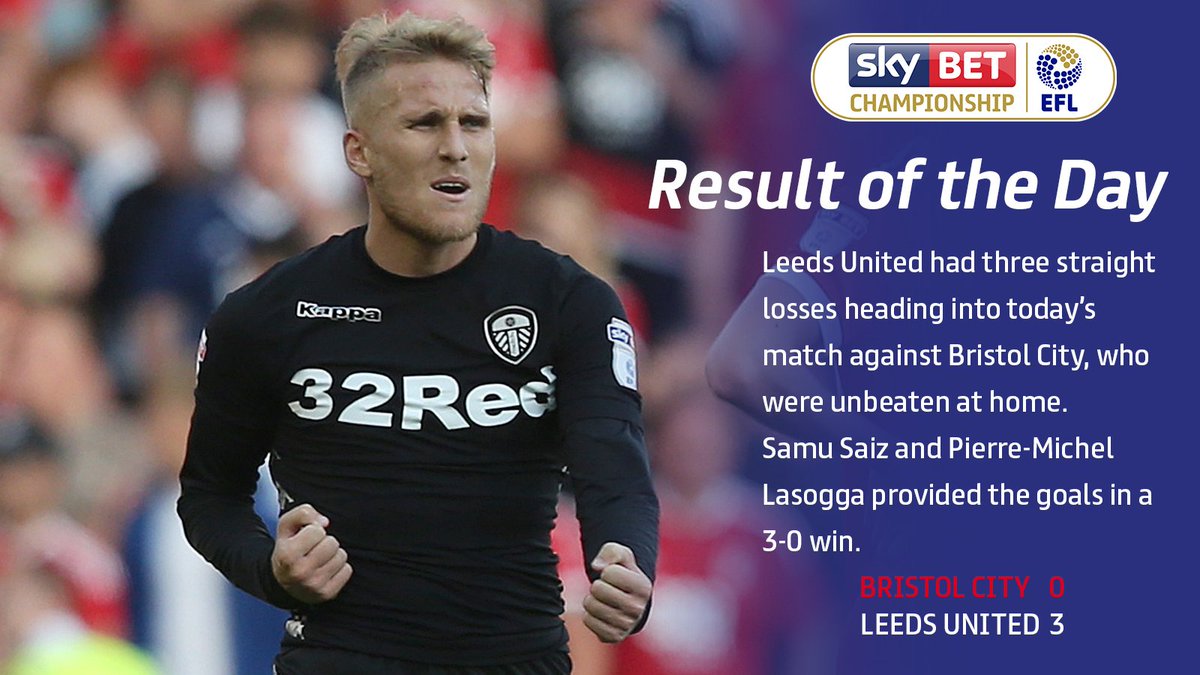 EFL
EFL
Follow
#EFL Result of the Day: Three straight defeats, and travelling to a side unbeaten on their own patch.

@bcfctweets 0-3 @LUFC https://t.co/44BSggbiz6
Follow
20:03 PM - 21st Oct 17
222
641
Positioned in fourth place, Leeds United know they can do better than they already have. They are just six points from the top spot and there is a long way to go yet. Less than a third of the season's fixtures have been played and so far it hasn't actually been that bad at all. The only hiccup was the losing streak but other than that Leeds have actually been pretty good.

Kalvin Phillips, Samuel Saiz and Pierre-Michel Lasogga all have four goals each. These are the types of forwards that Leeds need this season if they are aiming for possible promotion places. Without comfortable goal-getters, there would be no chance. They are also players that can score goals when needed.

Feeling cautious, Thomas Christiansen will be content, but not satisfied with how things have gone so far. United have already experienced slip-ups this season and will not want a repeat pattern.

One huge game coming up for Leeds is the home fixture to Sheffield United. The Blades aren't doing pretty bad themselves either. Recently promoted from League One they are currently in third place. The upcoming game at Elland Road on Friday night will definitely be one to watch.

Both clubs possess big fan bases so the forthcoming fixture should showcase a fantastic atmosphere. If Leeds can stick to their game plan and play to the crowd they can get back to consecutive victories. Although, it will not be easy against a Sheffield United side who have won nine of their thirteen games.

Getting the lead early will be key as it would kill Sheffield's confidence. The crowd will be intimidating so that should also help. Leeds v Sheffield United definitely has the potential to be a great game.