Is Lille for Real?

The last decade has been one of mixed fortunes for Lille. From winning the double in 2011, the club has gone from the top to engaging in relegation battles over the last couple of years. It's a period that has also seen several changes in the dugout. Not even the appointment of maverick Argentine manager Marcelo Bielsa in 2017 could solve the problem. If anything, the former Marseille and Athletic Bilbao gaffer’s time at the club created even more troubles off the pitch. And after securing only three wins in fourteen games, he was subsequently let go at the end of the year.

He was then replaced with former Saint-Etienne manager Christophe Galtier who was able to steer the club away from relegation. A 17th-place finish at the end of the campaign meant the side managed to avoid relegation to Ligue 2 by defeating Toulouse 3-2 in the second last fixture of the season. But the 2018/19 term has witnessed an upturn in fortunes under the Frenchman. Lille has been a different beast this time around.

In a league that is now ruled with an iron fist as Paris Saint-German now beat everyone into submission, Lille occupies a respectable second place as the first among the rest. With 12 wins and four draws in 21 league games so far, Les Dogues can be sure of returning to the Champions League at the end of the season if things don't dramatically change. But there is every reason to believe they'll keep winning. 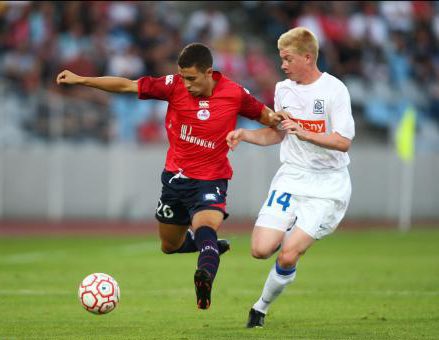 Kristof Terreur 📰🎥
HLNinEngeland
Follow
Classic pic. That's a #10YearChallenge too: one from the European game between LOSC and Genk in 2009. Saw a certain Eden Hazard score a goal during that game. Assist: Pierre-Emerick Aubameyang. A certain Kevin De Bruyne made his European debut against Lille too. #afc #cfc #mcfc https://t.co/epnIw40suB
Follow
09:51 AM - 19th Jan 19
94
327

With a good mix of experience and youth in the squad and players that have been performing extremely well so far, there is hope things can get better. This is shown by the centre-back partnership of 35-year-old Jose Fonte and 21-year-old Gabriel Magalhaes. Upfront, there is Loic Remy and Nicolas Pepe who are 32 and 23 respectively.

It’s an unreal situation. The manner in which the team has fallen so well into place happens so rarely. Even Galtier in his wildest dreams couldn’t have planned it so well. Apart from the untouchable Paris Saint-Germain, Lille has not lost to any of the top seven sides in the Ligue 1 table. A 3-0 defeat of seventh-placed Marseille earlier in the campaign sent out a statement about the new Lille.

But travelling to the Stade Velodrome for the return leg will prove an even more difficult task. For one thing, former Lille manager, Rudi Garcia, who is on the opposite dugout has his pride to protect. Then there is the club’s as well. But more importantly, Les Phocéens have Champions League ambitions of their own.  Whatever happens though, Les Dogues are well-positioned to finish the season strongly.

But there is still a long way to go. Marseille and Galtier’s former side Saint Etienne will contend for a top-four place in the second half of the season. The latter already occupies fourth place and will fight to maintain it or go one better. That means there is still a lot of work to be done.

Lille supporters are relishing the opportunity to see their side rub shoulders with the big boys in Europe again. Finishing in one of the top three positions and competing in the Champions League next season will be a huge achievement for the side. So all hands will be on deck to ensure they make this a reality.