By Mark Dannell
Bundesliga European Football Fahrmann Germany Gw27 Hoffenheim Match Reports Schalke
Not so many goals this weekend, but here is the Game Week 27 Bundesliga wrap up from Mark Dannell.

Well, I predicted it but the score by no means reflects the full story of this game. BMG were dominant throughout and in the first half man of the match Ralf Fährmann made 3 saves from Raffael alone. In total, the Schalke keeper made 7 saves. 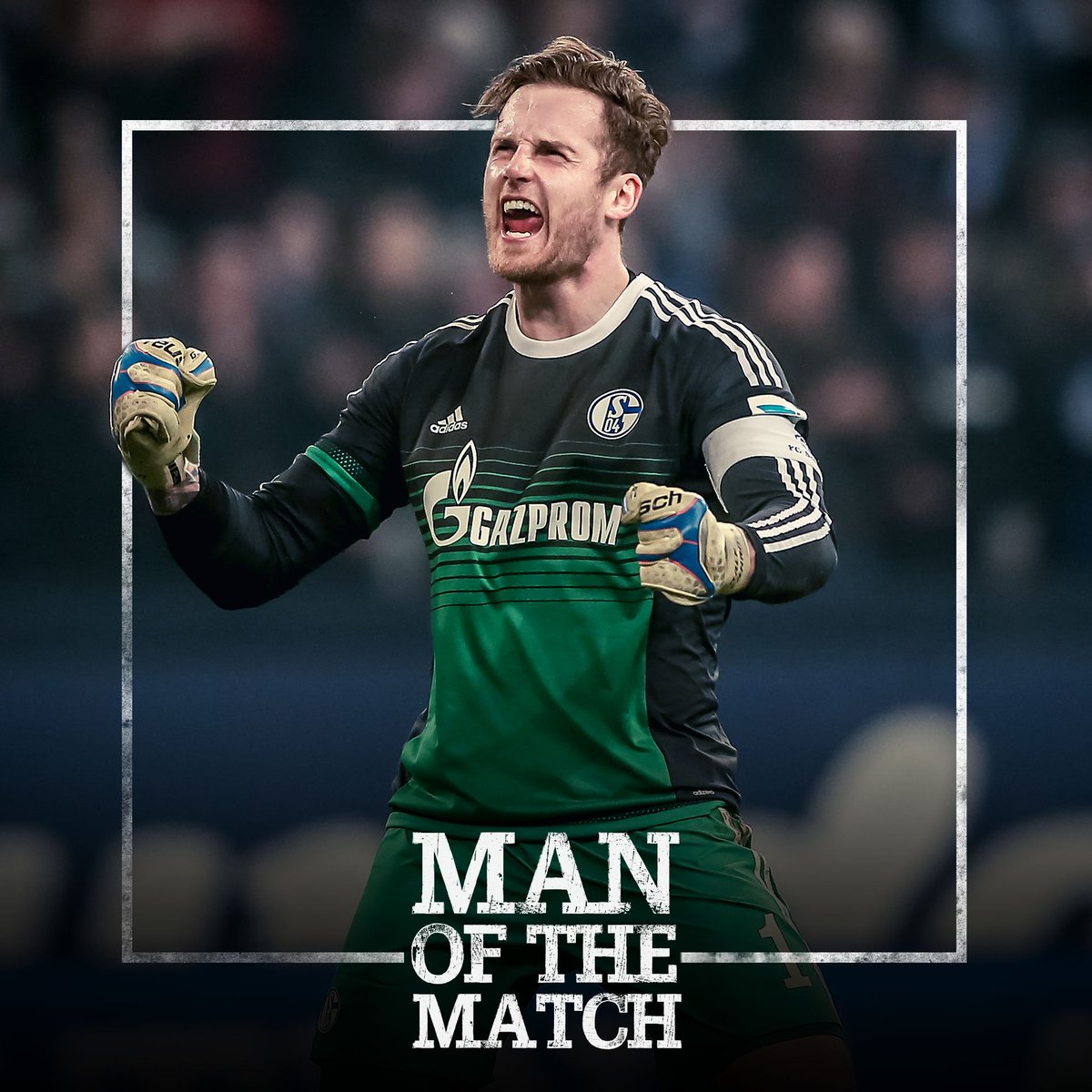 FC Schalke 04
s04_en
Follow
Ralf #Fährmann was in great form last night against @borussia_en & he's claimed the MOTM award. Congrats, Ralle! https://t.co/JFYKmTepV8
Follow
10:00 AM - 19th Mar 16
12
23
Schalke had a curious own goal from Martin Hinteregger in the 59th minute to thank for their lead after a bit of pinball in the box. BMG thought they had salvaged a point as Andreas Christensen scored in the 79th minute; however a Leon Goretzka long ranger was deflected by Granit Xhaka in the 83rd leaving Yann Sommer helpless.

Overall Schalke can consider them extremely fortunate to have picked up anything from this game. In doing so they have pulled past their opponents into the Champions League qualifying spot once again, but with 7 games to go there are plenty of twists and turns in this race yet.

Robert Lewandowski sealed the win in just the 10th minute with his 25th goal of the season. With that he has beaten his previous best tally of 24 in season 12/13 for BVB.

The game marked the 8th win in a row immediately following Champions league action for Bayern and they controlled the game from start to finish with as much as 80% possession for large periods of the game. It helps when you can rotate in players of the quality of Thiago and Kingsley Coman.

Poor Köln were helpless for most of the game, but a mid- table finish is beckoning and they would have been delighted with that offer at the start of the season.

Prediction– Away Win. Spot On!

Hertha were indeed able to extend their gap in the last automatic CL spot to 4 points after a hard fought win on Saturday afternoon.

Ingolstadt's extreme pressing from the off seemed to unsettle Hertha and it took until well after half-time against tiring legs to make the breakthrough. Goals from Haraguchi (54) and Kalou (69) seemed to have sealed the deal but a 75th minute goal from Lukas Hinterseer brought a few nerves into play for the home team. In the end, BSC were able to keep up their record this season of never losing after taking the lead.

Claudio Pizarro scored his 101st goal from the penalty spot for Werder, in the process becoming the clubs leading Bundesliga scorer of all time. This rescued a point after they had been behind in the first half. 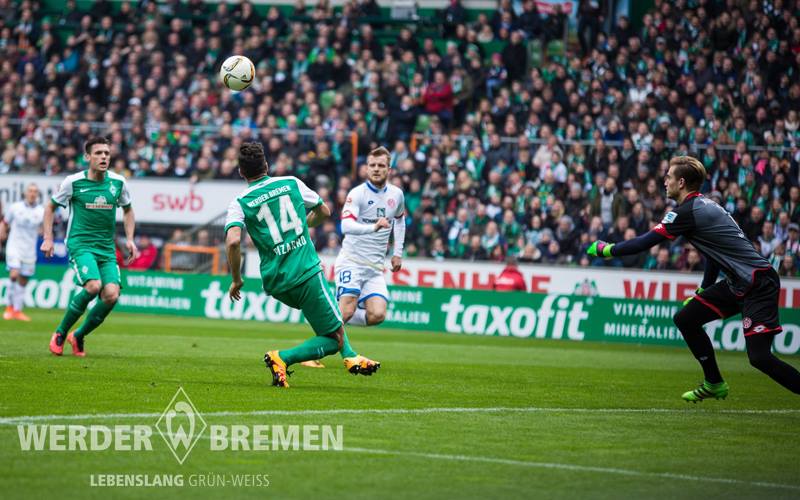 SV Werder Bremen EN
werderbremen_en
Follow
“I'm delighted. It's an honour to be the leading scorer” - @pizarrinha made history yesterday against @Mainz05en! https://t.co/FugtWcyArG
Follow
16:32 PM - 20th Mar 16
5
19
Werder had started much the better of the two without much in the way of chances to show for it. A header from a corner by on loan Chelsea defender Papy Djilobodji was the best they had to show against the well-drilled team from Rhein-Hessen. Mainz then pulled a sucker punch, scoring through Julian Baumgartlinger in the 38th minute with their first consequent attack.

Pizarro equalized from the spot in added time at the end of the first half after a Baumgartlinger foul on Junuzovic. 1:1 it remained in a hard fought but low on quality 2nd half.

Hoffenheim win my team of the weekend award for the 2nd straight week with a well earned (and first since the end of September) away win.

Andrej Kramaric opened the scoring on 20 minutes with a penalty, Rene Adler committing the foul on Kevin Volland and he was lucky to stay on the pitch. Volland doubled the lead just three minutes later after an indirect free kick routine. Another penalty, this time for the hosts was dispatched easily by Aaron Hunt after 30 minutes.

As HSV chased the game in the second half the fresh legs of Eduardo Vargas were able to make the difference on the break. The goal in the 67th minute knocked the fight out of Hamburg after they had not found a way through in a furious start to the 2nd half.

The 3 points for Hoffenheim were absolutely priceless in view of the results elsewhere this weekend and Hamburg are now just 4 points ahead of the relegation spots.

Another lacklustre showing from Wolfsburg and this might have been a real coupon buster for many people. Luckily I have learned not to include the Wolves in my betting slips recently. Darmstadt will be tearing their hair out again after Schurrle equalized in the 3rd minute of added time at the end of a drab game.

Sandro Wagner had given the team from Hessen the lead as late as the 82nd minute and now Darmstadt are just a point ahead of the relegation spots. 7 games without a win and a solution will have to be found to stop throwing away valuable leads if they are to survive.

A magnificent save by Lukas Hradecky in the 8th minute and a goal for Ben-Hatira were enough to secure the 3 points against Hannover. The Hannover defence were even generous enough to wave through the scorer and they will soon be officially relegated.

I would love to tell you more about this game but the Saturday evening kick off passed with barely a murmur, I fell asleep on the Sofa for part of the 2nd half after some strenuous work in the Garden in the afternoon.

Despite my mid-week optimism, Stuttgart were unable to overcome their mental block against Leverkusen. Stuttgart are a maddening team, capable of brilliance one week and indifference the next.

In the late march sunshine, Leverkusen were without 9 first teamers and handed starting debuts (4th appearances) to Yurchenko and Heinrichs.

The contest was settled by goals from Julian Brandt (11) and Bellarabi (49). Leverkusen, now free from Europa League commitments after the loss against Villareal can concentrate on securing European football again next year. Stuttgart still need a few more points to be safe for next year.

Augsburg are now officially in free fall, level on points with Hoffenheim and Frankfurt. Despite taking the lead, Augsburg never seemed likely to take all three points, even though an improved defensive display frustrated Dortmund for the first 60 minutes.

Finnbogason gave FCA the lead in the 16th minute through a well worked long ball routine. That was as good as it got offensively and Dortmund equalized on the stroke of half-time through Mkhitaryan.

After the break it was defence against attack for the home side, Castro in the 69th and Adrian Ramos in the 75th minute secured the points for BVB.

Dortmund could even afford to make 6 changes from the midweek exertions against Tottenham and top scorer Aubameyang was given the weekend off. BVB close the gap once again to 5 points and remain undefeated in the 2nd half of the season.

Prediction– Away Win. Spot On!

Here is the state of play in the table at the end of the week: