By Mark Dannell
1 Fc Koln Borussia Monchengladbach European Football Germany Lars Stindl Match Reports Rb Leipzig Sc Freiburg Slider Articles Tsg Hoffenheim
It was quite some weekend in the Bundesliga as Bayern and Leipzig pulled further ahead and it rained goals in the other fixtures. Here is the Gameweek 18 wrap-up 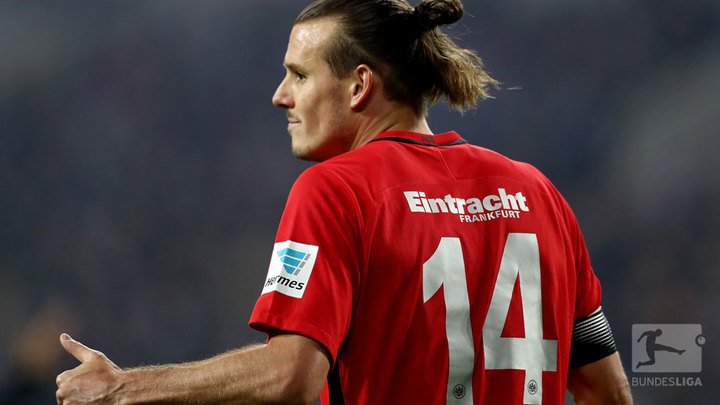 Bundesliga English
Bundesliga_EN
Follow
Friday Night Lights - @eintracht_eng have not conceded a goal in their last 7 Friday night games! #S04SGE 0-1 https://t.co/Ke5lKW96Q1
Follow
21:40 PM - 27th Jan 17
18
32
An excellent all round performance from golden oldie Alexander Meier secured the 3 points for Frankfurt on Friday night. A first half goal and a nonstop display of defence from the front meant Schalke could never settle and were restricted to half chances for new man Burgstaller.

With the win Frankfurt jump up again to 3rd place in the table, and more importantly means the gap back to Schalke is out to 9 points in terms of European qualification.

Despite taking the lead through Mario Gomez after just 4 minutes Wolfsburg was unable to capitalise as their old frailties returned after 3 wins on the trot. The Wolves seemed content to sit back and try and hit Augsburg on the counter but that backfired spectacularly as Halil Altintop equalised midway through the first half.

Realising the error of their ways Wolfsburg came out after half-time and turned up the tempo, Gomez unlucky not to score straight away and Ntep volleyed narrowly over the bar minutes later. And then, Augsburg launched a counter of their own, Altintop crossed and Kohr was on hand to slide in. Augsburg was able to comfortably see out the rest of the game and close the gap to mid-table, Wolfsburg are once again looking over their shoulders!

A well-deserved win for Ingolstadt saw them leapfrog their relegation rivals on Saturday afternoon. Hamburg just seem incapable of producing a display where they do not shoot themselves in the foot in one way or another.

A strong first half showing from Ingolstadt saw them in at 2-0 up, a sensational goal from Groß left the keeper no chance before Suttner's free kick was deflected by Gregoritsch, again no chance for the Hamburg keeper.

Any tactical alterations Gisdol may have made at half-time were promptly ruined by substitute Dennis Diekmeier, on the pitch two minutes and a blundering, ridiculous foul gave away a penalty which was dispatched by Cohen. Sakai pulled a consolation back but that was it, a poor afternoon for Hamburg.

An extremely promising display for Werder although they came away with nothing. Bayern dominated the first half and led after 45 minutes via 2 good goals from Robben and a direct free kick via David Alaba. At that stage it seemed like Bayern would go on and secure a convincing victory but Alexander Nouri made a couple of tactical tweaks in the break and the momentum swung for Werder.

Serge Gnabry had a good chance on 52 minutes but was unable to find the target after pressure, however just a minute later Max Kruse got on the end of a ball from Junuzovic and pulled one back. Bayern were forced into a defensive rearguard action to secure all 3 points with Werder just lacking the final ball to pull it level. The 2nd half display bodes well for the rest of the season for Werder, while Bayern secured a 7th straight Bundesliga win and march on towards the title.

“1-0 win for Köln. Anthony Modeste will score. It will otherwise be boring.”

That was my prediction before the game but an utterly pathetic “performance” from Darmstadt meant a carnival for Köln on Saturday afternoon.

Incredibly given the carnage that was to come it took until the 32nd minute for the scoring to begin, an own goal from Sulu fitting under the circumstances. Osaka nodded in shortly after and then Modeste scored his obligatory goal to close the game as a spectacle before half time.

The 2nd half followed a similar pattern 20 minutes had gone by before Darmstadt were awarded a penalty, duly dispatched by Sidney Sam. That seemed to wake Köln backup who scored 3 further goals from Osaka, Jojic and Rudnevs, all under minimal pressure from the demoralised home side.

Bundesliga English
Bundesliga_EN
Follow
"We're proud we managed it!" #ICYMI @RBLeipzig_EN brought an end to #TSGHoffenheim's 17-match unbeaten streak #RBLTSG https://t.co/N95QTEznyV
Follow
09:00 AM - 30th Jan 17
9
20
The game of the weekend did not disappoint and it is just a shame it did not have a “premium” slot on TV. As is standard, Leipzig set off going for the jugular, after 4 minutes Naby Keita perhaps should have made it 1-0 before Willi Orban was denied by a world class save from Oliver Baumann on 16 minutes.

And then the unexpected, Hoffenheim launched a counter, Amiri to Kramaric, back to Amiri who slotted home from 4 yards with Gulasci stranded. It could have gotten worse just minutes later as Demirbay passed up the chance to make it 2-0, that only served to fire up Leipzig even further.

30 minutes were gone when Werner got his first sighting of goal, his shot was destined for the corner before being deflected out for a corner. However, the rising star would not be denied for long, 8 minutes later and handily just before half time he poked in from the 6-yard box to equalise.

That seemed to knock Hoffenheim back somewhat, a kind of stalemate emerged for the next 20 minutes either side of half-time before Sandro Wagner saw red for a late, studs up challenge on Ilsanker. Predictably that led to an onslaught from Leipzig, Werner failed to take advantage of a one on one with Baumann before Sabitzer scored the winner with a deflected shot from range 12 minutes from time.

Leipzig, of course, are now free and clear in 2nd place, keeping up the pressure on Bayern. Hoffenheim's undefeated streak is over but that might just free them up from a bit of pressure of the coming weeks. 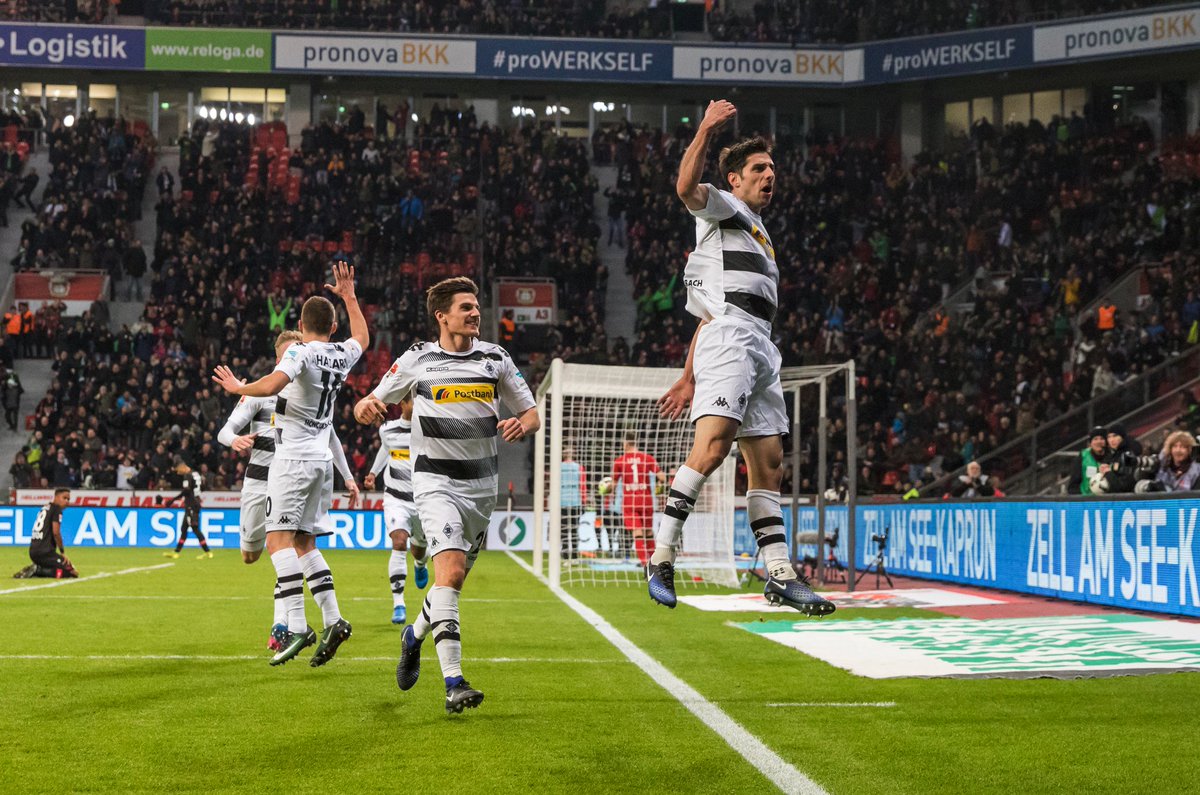 Gladbach
borussia_en
Follow
Captain Lars #Stindl: "Moments like these are why we play football." Read the full interview 👉 https://t.co/6DTzXWzQfc #fohlenelf https://t.co/OG4pPvCkEi
Follow
12:25 PM - 29th Jan 17
7
41
Javier Hernandez may have finally broken his personal scoring duck but from 2-0 up Leverkusen and Roger Schmidt produced one of the collapses of the season in a quite frankly mental Saturday night game.

The signs were there early on as Mönchengladbach started the more positive, Raffael, Dahoud and Hazard all were denied by Bernd Leno in a furious 20-minute spell to open the match. Perhaps inspired by their goalkeeper, Leverkusen then were suddenly 2-0 up, first Jonathan Tah and then Hernandez nodding in from corners within 3 minutes of each other.

After the half-time break the pendulum swung again, whatever Hecking said to his boys at half time worked a treat. Captain Lars Stindl took the initiative, scoring a fabulous goal to pull one back before nodding in Raffael's cross to level the scores just 6 minutes later.

Leverkusen was rocking now and it was no surprise when Raffael made a fool out of Tah and blasted home to secure a vital three points. What a game!

After last week's late heartbreak against Bayern, Freiburg was determined to secure the points this time out. 2 goals in the final 3 minutes meant things were not as comfortable as they could have been but another highly professional performance was this time rewarded with the win.

Jannik Haberer scored again, midway through the first half to give the Breisgauer a deserved lead but it was the late goals that grabbed the headlines. Nils Petersen looked to have wrapped things up, his 16th career substitute goal moving him 2nd on the all-time list in that statistic but Freiburg relaxed just a touch too much then, Julian Schieber pulled one back just a minute later. Despite an onslaught of long balls into injury time, Freiburg was able to hold out this time.

Like something out of those ridiculous Football Manager games that leaves you tearing your hair out, Mainz equalised with their only shot on target after Dortmund had taken the lead inside 2 minutes and dominated the game.

Things had started so well, Marco Reus was played through by Andre Schurrle and had no trouble putting BVB in front. Then followed long periods of sterile domination with no real chances to speak of before Danny Latza popped up with time running out to ruin Dortmund's day.

Next week is an absolute must win now for Dortmund as RB Leipzig come to town.