Are Messi, Suarez and Griezmann finally cooking for Barcelona?

It is an open secret that Barcelona struggled after Neymar departed the Nou Camp for Paris Saint Germain in 2017. Ousmane Dembele and Philippe Coutinho were brought in to replace the Brazilian. Both failed to step up in Catalonia.

As a result, the Blaugrana loaned Coutinho to Bayern Munich this summer and secured a deal for long-term target, Antoine Griezmann. The Frenchman finally became a Barca player after the Catalans triggered his €120 million release clause. A bright start to life at Camp Nou was obviously desirable. Instead, issues arose, one after the other, to disturb his settlement.

To begin, supporters held a grudge after his refusal to join them last summer. Then legal action from Atleti was mooted, based on when he agreed to sign for Barcelona. Next, he publicly admitted it was difficult to develop a rapport with Lionel Messi.

On the pitch, he found it no easier. Although he bagged a couple of goals in his first few games, Griezmann didn't really hit the ground running. He wasn't lying about the chemistry issues with the Argentine or Luis Suarez for that matter.

His combination with the duo didn't initially look promising. At some point, the Frenchman even admitted that he was struggling to get along with his new attacking mates. This inspired many to question whether he could thrive in Barca's attack.

Then, in a shocking turn of events, it took the 28-year-old just 90 minutes to put all doubts to bed. After returning to the starting lineup to face Eibar on the weekend, the attacker produced his most impressive performance since the switch. Suddenly, it appeared Barca's attacking trio could read each other's minds.

Combining perfectly with brilliant touches, Griezmann, Messi and Suarez zipped the ball around with tremendous pace and precision, knocking Eibar's defence off its feet. Travelling Barca fans watched in awe as the frontmen put up a spectacular display while delivering a vital 3-0 victory away from home.

Griezmann drew first blood. The Frenchman received a long pass from Clement Lenglet, aided by an untimely slip from Pablo De Blasis. He sent the ball past Marko Dmitrovic to put the Blaugrana ahead on 13 minutes.

Barca continued to run riot. After the restart, Suarez found Griezmann with an inch-perfect pass that the Frenchman gently laid off for Messi to fire home his second goal of the season.

There was no stopping them. Eibar's defenders were completely off-track as Suarez, Messi, and Griezmann seized control of the party. The trio combined once more for the final goal, sealing all three points for Ernesto Valverde's men.

Grizzy opened up the defence with a sublime through-ball to Messi. The Maestro calmly ignored his chance to score a brace and rolled the ball back to Suarez to fill an empty net. For the first time, the three men wrote their names on the goal sheet in the same game. No one expects it to be the last.

Barca's all-star attackers are finally showing signs of working together. Since Neymar's exit, Barcelona have sought to recreate a deadly attacking trio. The rest of La Liga can't be happy to know the job is finally done. 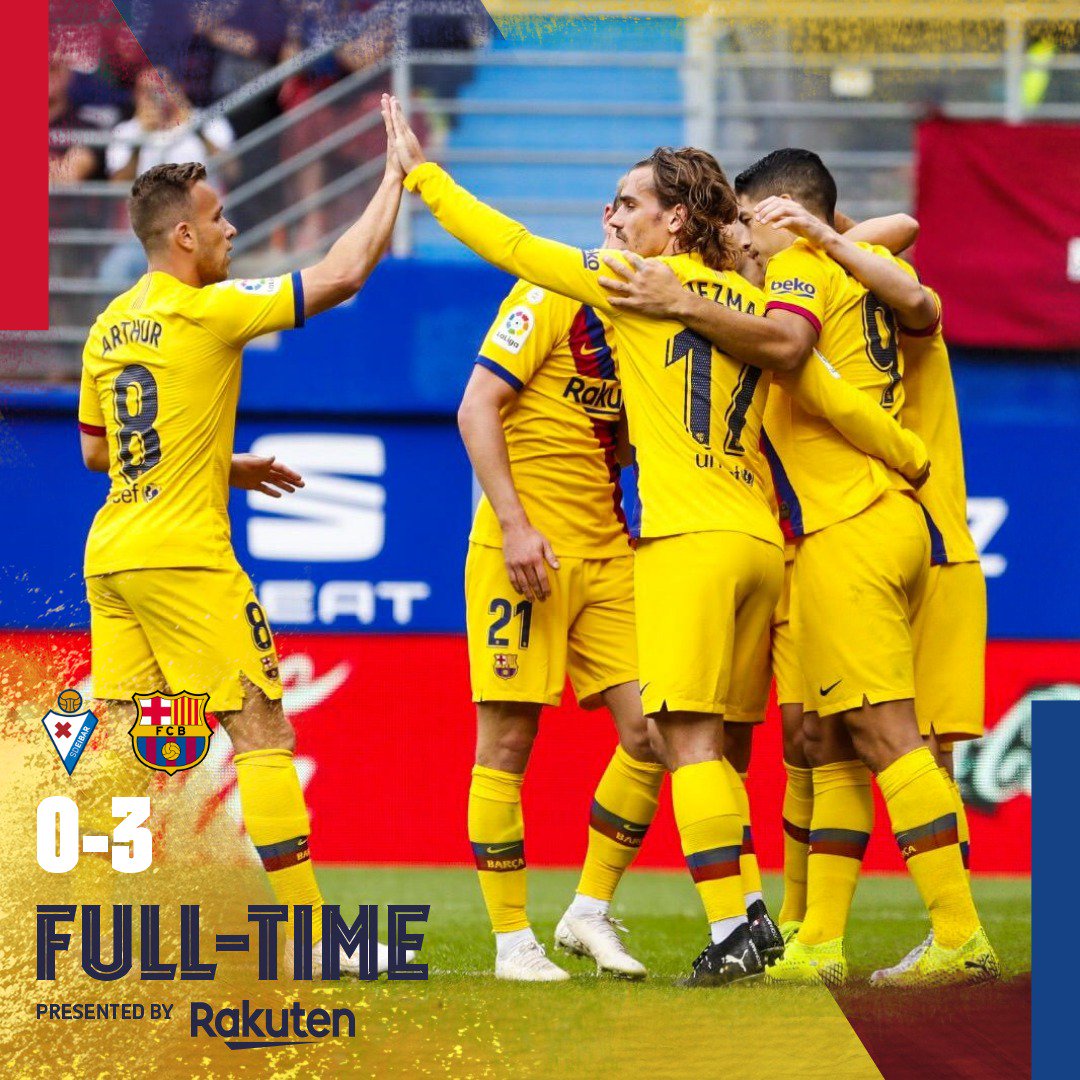