Michy Batshuayi makes everyone except Borussia Dortmund look the fool

Michy Batshuayi should change his twitter handle to @IToldYouSo!

Before he left Stamford Bridge for the WestfalenStadion, the Premier League saw an impromptu game of musical chairs erupt between second-string scorers during the January window. Theo Walcott went from Arsenal to Everton. Daniel Sturridge exchanged Anfield for the Hawthorns. Henrikh Mkhitaryan vacated Jose Mourinho's doghouse for Arsene Wenger's open arms. Olivier Giroud is now playing for rather than singing the Blues.

Even though Walcott had a head start and scored a brace to lift the Toffees over Leicester, he needed a warm-up match first. Despite switching countries and leagues as well as clubs, Batshuayi required little more than half an hour to show the world his quality.

The Belgian started for Borussia Dortmund in a Friday night tilt at the Mungersdorfer Stadion against FC Koln. Tilt it was, too.

Batshuayi's 36th minute strike came when BVB penetrated Koln's box. Jeremy Toljian pushed down to the touchline near goal, then cut the ball back. Michy was perfectly positioned to smash it home.

Koln equalised on the hour courtesy Simon Zoller. The Bundesliga cellar dwellers' joy was short-lived, however. Batshuayi completed his brace two minutes later. Dominic Heintz and Jonas Hector crossed wires while trying to win a second ball. Antonio Conte's erstwhile whipping boy was on hand to collect. With Jorge Mere playing him onside he closed on keeper Timo Horn, sliding the ball under him and into the far side-netting.

Mere would make amends by leveling in the 70th minute but another Chelsea reject, Andre 'Don't call me' Schurrle, would finally put down the stubborn Billy Goats in the 84th minute, keeping them three points away from the relegation places, now with a game less to play than Hamburg. In the process, Schurrle lifted Dortmund into second, for the moment at least, in the crowded six-team race for second behind runaway leaders Bayern Munich.

After the match, Batshuayi wryly expressed his joy at being given some playing time at long last. 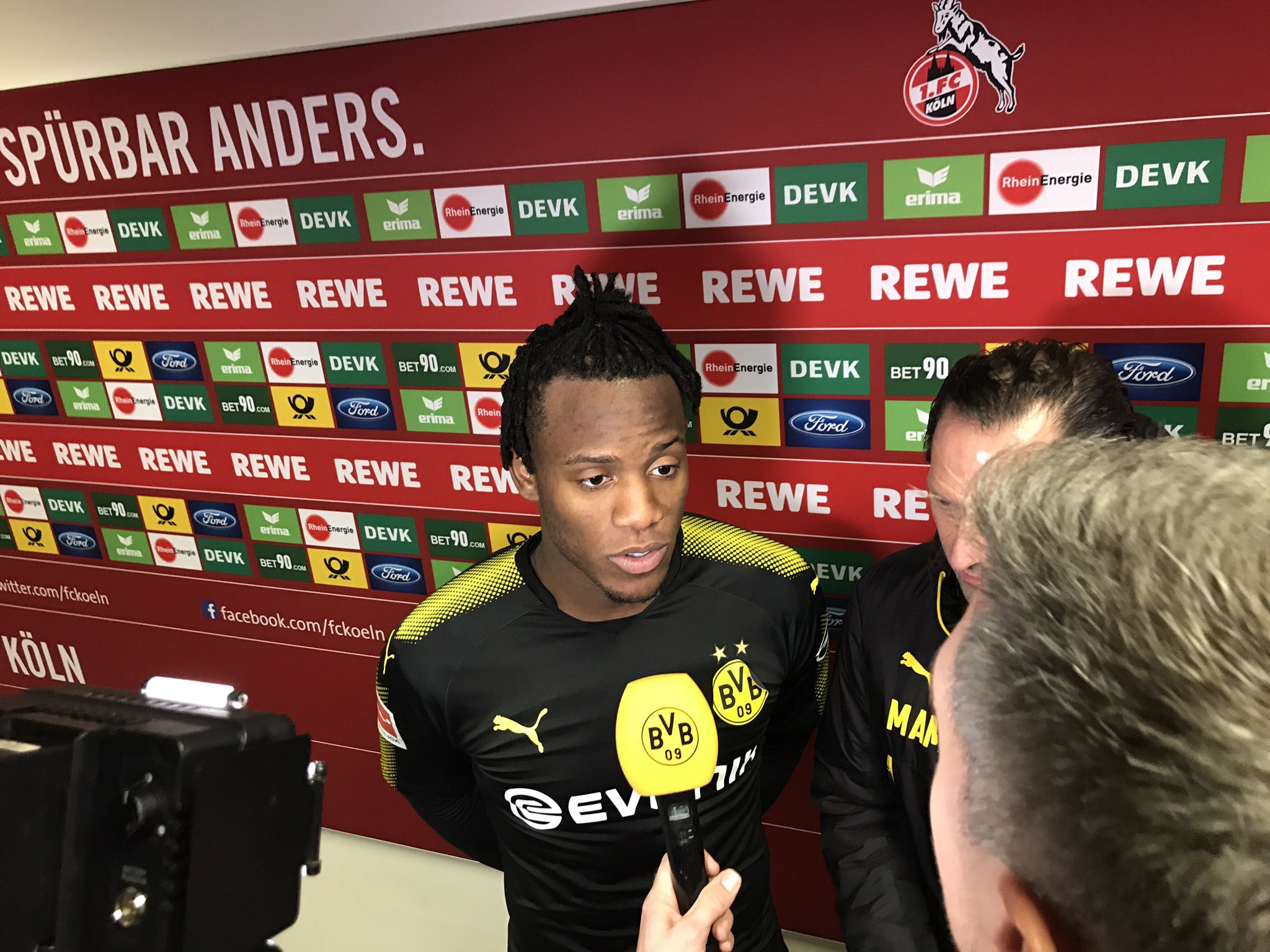 It's impossible to love the game and not feel good for the 24-year-old. The Belgian took advantage of every opportunity he was given at Chelsea.

He scored the goal that secured the Blues' title last year. In reply, Antonio Conte went out and bought another bench warmer, Alvaro Morata, to replace Diego Costa.

Despite the snub, Batshuayi continued to deputise in outstanding fashion, scoring ten goals in 996 minutes, nearly once per full match on average. Even so, when Morata struggled, then went down injured, Conte's first reaction was to play Eden Hazard as a false nine.

When the Italian finally turned to Batshuayi the player scored against Norwich in the FA Cup Third Round, assisted on a goal in the 4-0 Premier League victory over Brighton, and claimed a brace against Newcastle in the FA Cup Fourth Round, all in the space of eleven days.

After the Newcastle match, with rumours of Dortmund's interest in the air, Conte said he would play the young Belgian if he chose to stay, it being the player's choice. By then, it was too late. The manager hadn't understood that opportunities to impress aren't a one-way street. He had left his young talent decidedly underwhelmed and lacking faith. The Bundesliga beckoned.

Batshuayi's instant impact in Germany didn't just leave Antonio Conte and Chelsea looking red-faced, however. Pierre-Emerick Aubameyang doesn't look too smart for having left a team in much better shape than Arsenal. Nor do his abilities seem quite so dynamic when another player can step so easily into his shoes.

Arsene Wenger and the Gunners new scouting director Sven Mislintat don't look all that astute shelling out £58.5 million for a difficult personality when an eager one was waiting just across town. It is a scout's job to scout, after all, not rely on old contacts.

West Brom is bottom on the Premier League table despite being joint-seventh with Arsenal, Leicester, and Brighton in goals conceded. Only Swansea and Brighton have scored fewer than the Baggies. Desperate for scoring, Alan Pardew gambled on Liverpool striker Daniel Sturridge's health, which is little better than betting the week's wages Donald Trump won't tweet until payday. Apparently, Pardew had but to ask after the Belgian.

Hindsight may be 20-20 but the talented youngster gave everyone willing to look repeated glimpses at what he can do well in advance. Only Dortmund paid heed. Michy Batshuayi fully deserves to shout I told you so loud as he can.

Should Alvaro Odriozola look beyond Bayern Munich?
By Cherub Rai

Bayern Munich signed Alvaro Odriozola on loan from Real Madrid this week, on a contract which expires at this season's end. When the Spaniard arrived at Los Blancos two years ago,…

Who is Exequiel Palacios?
By Cherub Rai

On New Year's Day, Bayer Leverkusen purchased Exequiel Palacios from River Plate for €17 million and signed the 21-year-old midfielder to a deal through 2025. Clubs like Real…