Major League Soccer has eight matches on the docket this weekend, spread over three days.

The first is tonight.

This week’s edition of Friday night football, MLS style, features two mid-table Eastern Conference teams. Both have an excellent midfielder who can drive the team to greater heights. Only the Impact are using theirs.

Thirty-three-year-old Ignacio Piatti is Montreal’s best player. Manager Remi Garde waffles between playing him in the striker’s role or on the left midfield flank. Piatti is a deadly finisher but also an imaginative creator. His passing is sublime, his long-range shooting radar-guided. The Argentine has a goal and two assists in this season’s first four games, had 19 and six in 31 last season and has 57 and 27 in 118 in his Impact career. He is most prolific on the wing but is plug and play anywhere in the attack. As he goes, so goes Montreal.

Meanwhile, new Revs boss Brad Friedel has inherited a nasty controversy of the Riyad Mahrez variety. Thirty-one-year-old no.10 Lee Nguyen has repeatedly requested a salary upgrade, then transfers, and been denied at every turn. Like the Algerian, the American international eventually decided to hold out. Unlike Leicester, however, New England has not welcomed Nguyen back with open arms. He has been banished to obscurity, with the new boss toeing the company line, claiming his midfield wizard isn’t match fit.

The club has performed well during his exile, winning two and drawing one in four. Their record has them fourth in the East, among the playoff places.

What a difference a single goal can make. Montreal hold down the last Eastern playoff spot, the sixth, having won and lost two of their four played. Their goals scored and conceded are a break-even five apiece. The Revs have also shipped five but scored six, to earn an extra point and two places in the standings. They’ll try to hold onto their spot tonight.

The CONCACAF Champions League semifinal first legs played out on Tuesday and Wednesday evenings. Each match pitted one MLS side against a Liga MX club. Each division came away with a win.

Toronto FC 3-1 Club America -- The MLS Cup holders defended BMO Field on Tuesday evening, to the extent there was a bit of guerilla warfare in the tunnel at halftime. TFC midfielder Jonathan Osorio took an elbow to the nose while trying to defend Sebastian Giovinco from two Club America coaches. The pair were incensed over what they perceived as simulation from the Italian that drew a penalty, which the Reds no.10 duly converted. After America levelled, Jozy Altidore restored the lead just before the interval. Ashtone Morgan added a third near the hour-mark.

After the match, the two managers offered conflicting accounts of events. Miguel Herrera claimed police brutality against his players. Greg Vanney laughed off the accusation.

Next week, the two sides rejoin the battle at Estadio Azteca in what will surely be a hostile environment for the MLS champions. America can progress with a 2-0 victory but will need twice that to avoid penalties if TFC can cancel their away goal.

Chivas de Guadalajara 1-0 New York Red Bulls -- After dominating Tijuana in the quarters, the Red Bulls didn’t have it so easy in Jalisco against the Goats. Chivas capitalised on a poor pass in midfield to spring the counterattack. Isaac Brizuela ran onto a perfect through ball then placed his shot under Luis Robles and inside the far post.

Red Bulls had an opportunity to level when Bradley Wright-Phillips broke in on Rodolfo Cota. He couldn’t chip the ball over the onrushing keeper.

Chivas boss Matias Alymeda faces a choice next week at Red Bull Arena. Does the former defensive mid try to hold onto what he has for 90 minutes against a strong New York attack? Or does he try to catch out the chasing Red Bulls early to add to his lead?

There are five matches Saturday, two on Sunday.

Atlanta United v LAFC -- With a depleted back line and opponents LAFC stinging from a late collapse in El Trafico, United coach Tata Martino is concerned. Diego Rossi and Carlos Vela have been lighting it up for Bob Bradley. Atlanta is third in the East on nine points, the Wings fourth out west on six, having played one fewer game. With two potent attacks facing questionable rearguards, this one could be a barnburner.

Philadelphia Union v San Jose Earthquakes -- Two teams spinning their wheels out of the gate meet up in the City of Brotherly Love on Saturday. Each has played three, won one, and sports a -1 goal difference. Philly has also managed a draw. You’ve heard the saying something has to give? Well, nothing really does in this tilt.

FC Dallas v Colorado Rapids -- There are two unbeaten teams in MLS. NYCFC top the East. FC Dallas are mid-table in the West. Oscar Pareja’s Toros have only won one of their three matches. They’ve also conceded just twice. FCD should move up the table as the season progresses. They can’t sleep on the Rapids, though. Texas and Colorado enjoy a fierce rivalry in college football [gridiron] that spills over into MLS. How could it not? There is even a Tomato War in which residents of each state square off annually at a Colorado resort and hurl the red vegetables at one another. Or is it fruit?

Chicago Fire v Columbus Crew -- The Fire earned their first point last week while the Crew suffered their first defeat. Bastian Schweinsteiger and Co. must pick up a win to lift themselves out of the Eastern cellar.

Real Salt Lake v Vancouver Whitecaps -- RSL is another squad that needs to kick it into gear. Mike Petke’s team is ninth in the west with four points from as many matches. Before his arrival, the Utah side had a reputation as a tough nut to crack. This season, they’ve already shipped nine goals. Vancouver is second on goal difference, but have shipped seven in five. There’s a chance for an upset here.

Orlando City v Portland Timbers -- The early Sunday game is a cross-conference matchup. Gio Savarese is in charge of Portland’s rebuild and the foundation is still being laid. The Timbers are second from bottom in the West with an identical goal record to RSL (4/9). Orlando’s rebuild is much further along even though Kaka has only just retired. With Dom Dwyer, Justin Meram, Will Johnson, and Sacha Kljestan having all been plucked from rivals in the past season-and-a-half, the Lions could roar in the East if they can become a proper pride.

LA Galaxy v Sporting Kansas City -- Please sir, may I have some more Zlatan? The Galaxy can draw level with the West’s top side with a second win in the Ibra era. Are more wonder goals in store? One can only hope. 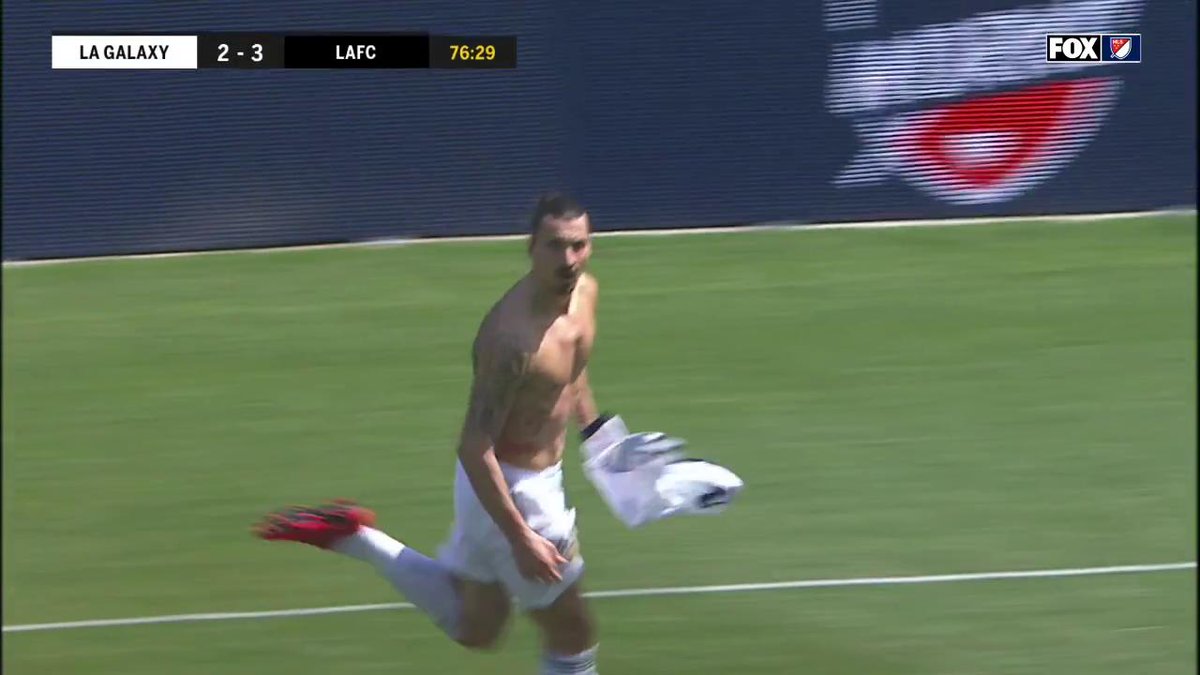 Yes, that’s Ashley Cole with the playful shove in the face as the celebration winds down.

After reports emerged that CONMEBOL was considering inviting the United States to the Copa America in 2019, Sports Illustrated’s Grant Wahl revealed the invitation has been sent. The USSF is mulling it over.

Hmm? Go to Brazil? Play the Selecao, Argentina, Chile, Uruguay, and Colombia in the Western Hemisphere’s top competition? What do you think?

It seems like a no-brainer. Mexico goes every time. The US hosted the last one, which celebrated the tournament’s centennial.

The problem is the Gold Cup is staged later in the same summer, meaning the Americans may have to send a split squad to each event. Having just crashed out of World Cup qualifying, and still managerless, it might be more advisable to concentrate on winning one than participating in both.

On the other hand, it will give the new boss an opportunity to test far more players in meaningful matches. Why not go for it?

Race for the MLS Cup

5. FC Dallas -- As mentioned, the Toros are unbeaten. They have the coach and young talent to push their way up the table. As long as they do, they will be here.

4. Los Angeles Galaxy -- Last week, I explained the need for at least one Western Conference team on this list. That hasn’t changed. Other things have, so this week there are two. After falling behind 3-0 to LAFC, Galaxy manager Sigi Schmid did what any rational person would do. He let Zlatan Ibrahimovic off his leash. Wait, did I say rational? Yes. Yes, I did. And the move worked. Ibra levelled from 35 yards, an Equalizer in the ruthless Denzel sense much more than the suave, elegant Edward Woodward vein. Zlatan then headed home the winner to push his new side up to third. Afterward, the Swede admitted Cristiano Ronaldo’s bicycle kick was the more amazing goal, but not without suggesting the Portuguese try it from 40 yards as he once managed against England.

3. Atlanta United -- There may be two Western Conference teams in this week’s ranking but the East is still the beast. Atlanta hold down the third spot but could lose it next week if Tata’s makeshift defence can’t hold off LAFC. With Darlington Nagbe, Miguel Almiron, Hector Villalba, and Josef Martinez in the attacking third, the Five Stripes can win a 5-4 game when needs must.

2. Columbus Crew -- The Black and Gold came up short after travelling 4,100 kilometres last week. Seems a waste. Nevertheless, they put up a good fight and deserve to hold down the second spot. By comparison, this week’s journey is a stone’s throw, just 570 km to Chicago. Can they get back to winning ways?

1.New York City FC -- Patrick Vieira’s unbeaten side flexed their muscle after a draw in New England by embarking on their own cross-country road trip. San Jose were their victims. With a bye this week, the Sky Blues could have stayed in California to enjoy the sun and surf but rumour has it they’ve been summoned to their overlord’s fortress in Manchester to console Pep Guardiola’s emotionally scarred group after their horror show at Anfield. Reportedly they have been giving out mannies, peddies, and Swedish massage with bonuses promised if Pep’s team recovers to win the Premier League title over Manchester United. It’s a living.

See you on Monday with the MLS Weekend Review.