Could Morata and Moreno form Spain's next great striking duo?

There’s a sense of optimism growing within the Spain national team. La Roja is playing the beautiful way which resonated with their dominance earlier in the decade. A sudden managerial change shouldn't derail that. With stacked options for the boss, competition inside the squad remains stiff, thus leading to quality individual performances.

However, one particular shining aspect of the Spain team is their centre-forwards' evolution in 2019. Not too long ago, Cesc Fabregas or Pedro Rodriguez played as false number nines. Now, there are multiple options for Luis Enrique to choose from.

The choices remain somewhat spread out, though a particular partnership is beginning to bloom. Alvaro Morata has found his calling as a cunning scorer. Alongside him, Gerard Moreno is finally beginning to turn into David Villa's potential replacement.

Despite playing similar positions, both have different approaches. The Atletico man is more like a poacher inside the box, who can also offer a serious aerial threat. Moreover, the 27-year-old’s link-up play and hold-up ability throws it back old school. Having netted four times in as many La Liga games recently, perhaps he’s finding his best scoring touch once more.

Moreno has been this season’s breakout star. With eight goals from thirteen league games, he’s just behind veterans Karim Benzema and Lionel Messi in the top-scorers chart. A conniving striker with plenty of creativity ingrained inside, a 56% shooting accuracy, which tops the aforementioned Benzema, signals his precision.

The 27-year-old is more an inside-forward, loving to move through the wings to create added pressure. His expert finishing ability and close control make him reliable. The unique aspect is his playmaking ability, having the tactical awareness and skill to poke glorious through-balls through rigid defences.

In the last two Euro 2020 qualifiers played together, Morata and Moreno have contributed towards six goals (4g, 2a). The Villarreal striker contributed in five of those. La Roja is assuredly pleased seeing goals coming from everywhere, but in pressure situations, the forward men are most relied upon. Their new striking duo has enough firepower to come through in high-intensity games and situations.

Yet, as the Euro’s edge closer, the pair must be played together regularly. Moreno’s flair mixed with Morata’s lethality, Espana would be utilising a menacing combination. Comparisons with David Villa and Fernando Torres stand unfair, but there’s always the potential to reform a similar spark... 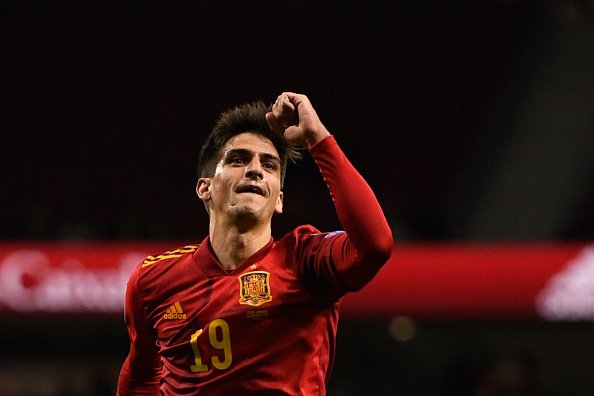 But then, sidelining Paco Alcacer would be an injustice in itself. However, when looking at the Spaniard’s scoring record from the bench (he scored 13 of his 18 Borussia Dortmund league goals as a substitute last season), there’s the impactful x-factor Spain have lacked for long.

Complains about predictability in their style could be thwarted with an ace-in-the-hole like Alcacer. He’d change games in a whisker with his unpredictability and guile. Mikel Oryazabal is another key player with the tendency of adding flair as a substitute.

To the Spanish centre-forwards’ delight, they have certain bright brains running the show behind. Thiago Alcantra, when fit, is an expert in dinking cheeky chipped passes or through-balls to destabilise defences. Santi Cazorla, despite being 34, still has that deft touch to carve open spaces. The way he’s running the show makes it difficult to remember his career was nearly destroyed by an injury.

Jesus Navas remains Spain’s bursting engine down the right, with his accurate crosses being heavenly for powerful heads like the Madrid man. Jordi Alba is the surging cog to hand goals on a plate for those inside the area from the left. Then you have Dani Ceballos, Saul Niguez and Daniel Olmo, who all have that special incisiveness to turn things around at the slightest turn.

After an emotional year, Luis Enrique needs time to settle back into the job. He knows La Roja’s strengths and weaknesses, but a lot’s changed in five months. To keep their rise to domination intact, he must embrace that.

Then again, one can’t blame the former Barcelona coach for thinking through his options. But even he must be itching to tinker with his new combination. Morata and Moreno are approaching their peak. A lack of goals caused the 2018 World Cup embarrassment. If these two opportunistic strikers get on the same page, scoring won’t be a problem anymore for La Roja...