My new local: The Nissan Stadium

Moving to Japan. The greatest thing I’ve ever done. The lights are brighter, the trains are busier and the football is better. Okay the last one, you might think is a stretch – but I can assure you it’s still good here in the land of the rising sun.

The J.League formed back in the 1990s to bring about professional football in the land, in the wake of the country’s World Cup bid for the 2002 tournament. The bid was later merged with South Korea’s bid and was successful.

One of the results of the tournament being partially staged in Japan was the need for new footballing infrastructure. Japan didn’t have much in terms of big football stadia, so needed new ones to hold the games. One of the chosen destinations for a new ground was Yokohama. A 72,000-capacity stadium would be erected in the city – the Nissan Stadium. Yet at the time, no team had a legacy big enough to populate the ground after the World Cup had been and gone. Cometh, Yokohama F. Marinos. A merger between Yokohama Marinos and the Yokohama Flugels gave the city a team worthy of inheriting this venue. The team would also take the colours of the national team, the Samurai Blue.

The colours make up two of the club’s integral themes. The club is proud of its Japanese national heritage, so the club has a blue shirt, white shorts and red socks – just like the national side. Those colours, however, have synergy with another nation, France. The club makes full use of that and plays songs from Les Miserables before kick-off, and most of the crowd know the words. They even have a French manager in Erick Mombaerts. The other theme is that of nautical vibe as Yokohama has a rich port history; so, there’s an anchor on the club badge.

Getting off at Kozuke station, you’re immediately hit with the energy of football paraphernalia. The blue, white and red are apparent from the platform to the end of the escalator. Then you start to see images of the mascot, plastered all the way to the stadium. Marinos-Kun is a yellow seagull who dresses as a sailor – again befitting of the nautical theme. 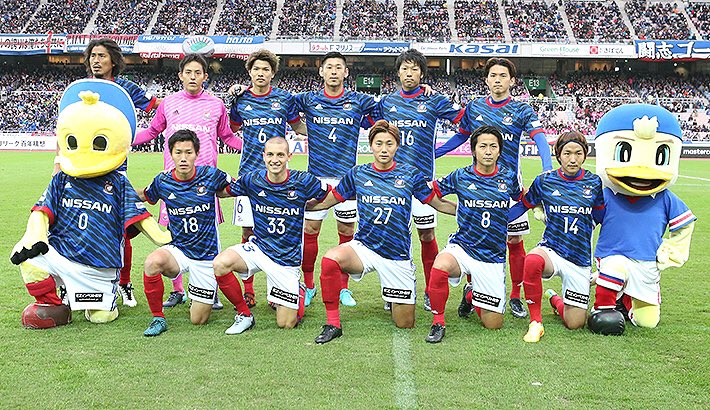 Entering the ground, you get a sense of the fanfare, there’s a merch table at every juncture selling all things bric-a-brac with a Yokohama FM logo on it. Trading cards, umbrellas, coasters, you name it – they’ve got it, as well as your football shirts, scarves. No need to buy a programme though, it’s free. How good and frugal is that?

Now at this point, you can see the cracks. Whilst the ground can hold 72,000… and the JFA would have hoped that the crowds would have continued to fill the stadium… but only 29,700 turned up. Don’t get me wrong that’s still a lot of people spending their evening with the club (and several more than at Chesterfield), but a little disheartening to the folk who do come out and support the team. The empty seats don’t do anyone any favours, especially when there’s so many.

The game I was in attendance for was a top of the table clash which promised excitement. The hosts and my newly adopted team were fourth in the table and chasing the coveted top three spots, to qualify for the Asian champions league. The opposition, Kashima Antlers, however, were chasing in on a second successive league title; whilst they couldn’t win the title at the Nissan they’d make a great leap to do so with a win.

The game started with a real pulse of energy, the home crowd truly behind the team and it didn’t take long for that power to transfer to the pitch. In the third minute, Ito headed Amano’s corner kick delivery straight into the back of the net – Yokohama had lift off and the crowd were buoyant. This was the start they needed if they wanted to break into Asia.

Sensing that the Antlers were still licking their wounds, the Marinos continue an onslaught of attacks from Martinus, Babunski and Nakamuchi who all looked in fine fettle going forward. Amano took advantage of an unconfident defender, dispossessed him, took the ball past him to leave a one-on-one with the keeper and didn’t decline the opportunity to score. Yokohama FM now rocking in the Nissan, 2-0 up.

The game started to slow down in pace and the away side started to look a little more in control, fashioning a few chances as Yokohama FM became a little complacent after taking a two-goal lead. That self-approbation came to haunt the home team as the Antlers scoring a goal just before halftime – leaving a sour taste in the home side supporter’s mouths during the break.

Now usually, I like to treat my taste-buds to a pie at halftime – but having navigated a large surface area of the arena, I couldn’t find one. Although I started my search for one knowing the chance of succeeding in my quest would be low – so I wasn’t too disappointed when I sat down with my noodle dish. A good noodle. Beef flavour, but I don’t think there was any real beef content. Couldn’t be sure though. Would probably try something else next time. The beer was moderately priced at 600 yen, that’s £4.00. Which I’ve since realised is actually pretty reasonable for a beer in a Japan.

The second-half started with some real gusto with both teams having a point to prove. The Antlers, however, showed why they are the current champions and why they are on track for a second league title, by levelling the game. Ueda scored the equaliser in the 66th minute and the mood changed around the Nissan immediately. The Yokohama faithful were silenced and the travelling fans roared for the first time since kick off.

Now back in the balance, the game stood delicately on the pendulum. Both teams very aware they could break the other down, but at the risk of conceding. With a league title to secure, the Antlers seemingly went for it. They drove forward but left gaps at the back. Uncertainty at the back allowed Yokohama shots on-target. The telling shot came from 19-year-old Keita Endo who managed a crack on goal, the opposing keeper tried to save it – didn’t get much on it and the defender couldn’t either as the ball ricocheted into the back of the net. The home side was back in front, 3-2. The Marinos support now in full voice and became the 12th man for the team as they saw it the game out.

The final whistle blew and the crowd were energised again and was accompanied by a large bellowing voice over the speaker system: “VICTORY!” after which the kop end fans all take out their Yokohama FM branded umbrellas and hoist them in the air, in a semi-coordinated fashion. Quite the spectacle to see. A good number of supporters stayed in the ground to watch the post-game interviews that took place on the field.

After the festivities of the game, the crowds dispersed from the stadium in a polite fashion – much is the way of the culture here. Not terribly much noise either and left the area in good taste.

This wasn’t my first football match in Japan, but my first whilst residing in the country. Yokohama won this game but finished 5th in the league. Yet, their season isn’t over yet – they’ve got the semi-final of the Emperor’s Cup to contest against Kashiwa Reysol on Saturday.

Altogether a nice ground, which needs a few more people. With it only being 15-years-old and designed for the World Cup, it has a nice futuristic feel to it – and the view will probably always be good from any seat.