He feels this pivot man provides the balance, stability, control, leadership and makes everything complete. Mourinho has had quality holding midfielders in the form of Costinha at Porto; Claude Makelele at Chelsea; Esteban Cambiasso at Inter Milan; Xabi Alonso at Real Madrid and Nemanja Matic at Chelsea on his return to the club.

But when 'The Special One' arrived at Manchester United, he didn't have his ideal holding midfielder. He had Michael Carrick, who didn't have the legs; Marouane Fellaini, whose skill set wasn't suited to the position; Mourinho did not fancy the likes of Morgan Schneiderlin and Bastian Schweinsteiger too. But he found a dependable player in Ander Herrera, who did the job quite well but still wasn't the ideal player in that position. This was one of the major reasons that Mourinho's men couldn't challenge for the league last season.
This season, Mourinho had set his transfer priorities straight. He desperately needed a defensive midfielder. So, he turned to his former confidante at Chelsea, Nemanja Matic, to anchor the midfield. Matic was a key member of Jose Mourinho's Chelsea side that won the Premier League in 2015. Nemanja Matic signed for around £40 million and there was negativity all around the transfer. People thought Matic was a finished product, was a bad distributor and was not the right man for Manchester United. Then again, in behind all of this, Jose Mourinho, pulled off a masterstroke; like he always does.


After all this, Matic made his Manchester United debut against Sampdoria and became an instant hero. He continued this with another great performance against Real Madrid in the UEFA Super Cup final. Then came the Premier League. United was scheduled to play West Ham at Old Trafford on the opening day of the season. The Red Devils thrashed the Hammers 4-0. The Man of the Match? Nemanja Matic. This was just the beginning. Matic prolonged his flawless performances with excellent performances against Swansea, Leicester, Basel and Everton. Yes! He's been great in almost all games so far.

The United Stand
UnitedStandMUFC
Follow
Matic has made a humongous difference! Absolutely crucial! Literally the bargain of the summer. Chelsea fans crying into their pork pies.
Follow
16:37 PM - 13th Aug 17
369
1108

Matic is just the perfect package. The Serbian International is an on-field leader, organises the team and provides balance and support to both the attack and the defence. Manchester United look a completely different side with him in the team. With him shielding the centre-backs, the full backs have the license to push forward and increase output from the attacks. And in the middle, he stops opposition attacks and wins the ball back. Also, did I mention about his work rate yet? He's an absolute tank. He never runs out of energy and covers almost every blade of grass on the football field. And on top of all, he has Jose Mourinho's trust.

Nemanja Matic is also super quick. He is an asset on counter attacks; offensively as well as defensively. He can either dribble the ball forward or release one of his teammates. Defensively, he tracks back very fast, reads the game and makes the tackles when he needs to. The 28-year-old is a giant, standing at 6ft 3 inches. He uses his enormous stature to impose himself on other players and also to win aerial duels. The former Chelsea man is great on the ball too, with exceptional passing and dribbling abilities. In the Premier League this season, he has completed 12 take ons and completed 322 passes with an accuracy of 90%. (Stats from Squawka)

You'd think that's pretty much for it a defensive midfielder. It is, but not for Matic. Matic has great tactical awareness coupled with excellent decision-making. Take United's opener against West Ham for example. Matic won the ball, gave it to Rashford and made the forward run. He made the run because he knew Mkhitaryan dropped deep and covered his position. Then, he made a selfless run down the left, which drew Winston Reid out of position and created space for Rashford to assist Lukaku's goal. Talk about intelligence!
What Matic also does is free up the attacking midfielders, especially Paul Pogba. The Frenchman has two goals and two assists from six appearances in all competitions this season. Pogba, with the presence of Matic alongside him, has the freedom to join attacks, make forward runs and basically just play his natural game. Pogba made 263 successful passes in the Premier League with an 85% pass accuracy. This has increased productivity in the opponent's half this season. Players like Henrikh Mkhitaryan, Juan Mata, Anthony Martial and Marcus Rashford have less tracking back to do and can now focus more on scoring goals. Matic allows players around him to be better. He makes everyone's work a little easy. Nemanja even has a lethal left foot and can score some absolute belters along the way! (Stats from Squawka)

Matic earned huge praise from pundits and fans all over the world. Especially from his manager, who said: “ I cannot say that I had better guys than him [Matic] in my career.” Mourinho also said that this is "the best form that I have ever seen him. I never saw Matic playing so well." And these stats just prove all of the above. 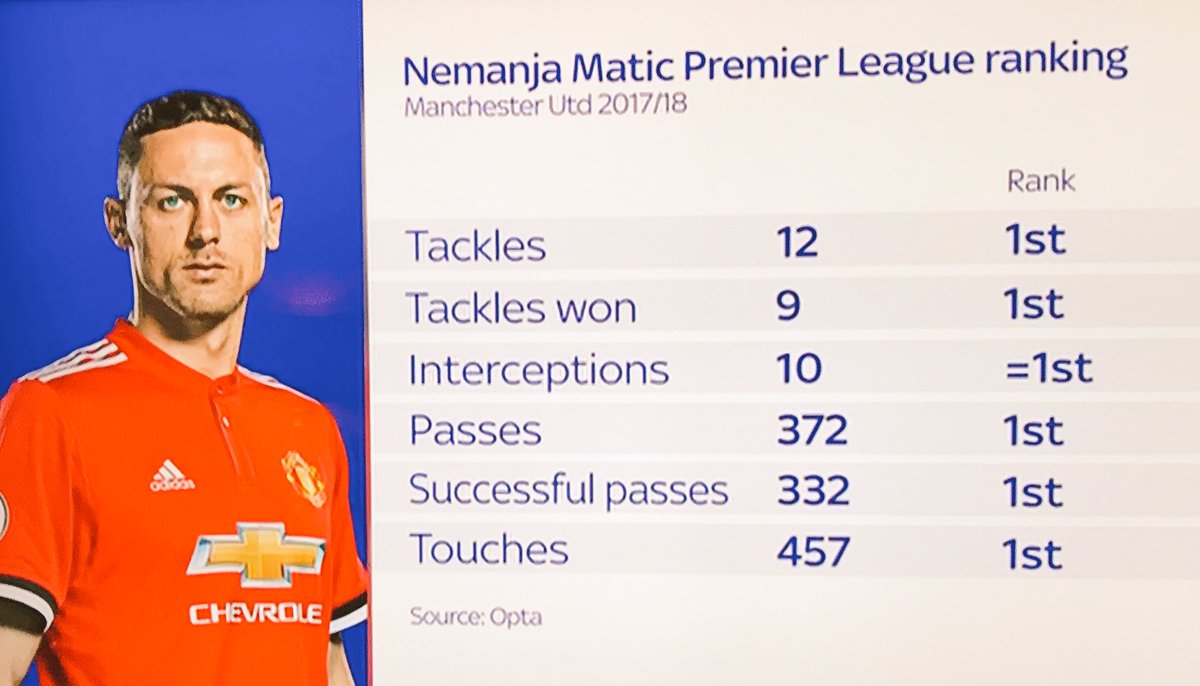 United Peoples TV
UnitedPeoplesTV
Follow
Nemanja Matic. Signing of the season. https://t.co/fS8GMxcLut
Follow
20:24 PM - 18th Sep 17
380
531
To sum up, Nemanja Matic has been brought in to do a job and he's doing it, almost flawlessly. He looks to be one of the best deals of the summer already. Manchester United now finally have a midfield powerhouse that they were longing to see since Roy Keane left! The missing piece of the puzzle that's been found, at last! Another stroke of genius by Jose Mourinho.