Why Emery must stop toying with Mesut Ozil

When people lack interest in someone but aren't willing to admit it verbally, they take other routes to show it. Unai Emery is proving this theory in the way he's treating Mesut Ozil. The Spaniard's lack of regard for him has sprouted a lot of accusation about the German's ability. It's surprising the playmaker is still at Arsenal after a summer filled with rumours about his possible exit. Their relationship continues, at least until January.

The Gunners miss Ozil. They need more of him than last season. Emery proved his smartness by including the midfield maestro in the pre-season tour. That was enough to silence the fans and make them believe he had plans for the 30-year-old.

It proved a trick. Ozil missed Arsenal's first three Premier League games against Newcastle United, Burnley and Liverpool. Security concerns and illness were mentioned as reasons. Those issues have been settled but he still didn't feature in Sunday's North London derby. His creativity was needed during the draw with Tottenham Hotspur.

The Gunners have made obvious improvements this summer. For one, acquiring Nicolas Pepe has reinforced their attack. However, the Ivory Coast international, Pierre-Emerick Aubameyang and Alexandre Lacazette can't reach their potential as a trio without proper backing. They require someone to produce killer passes. Matteo Guendouzi managed it against Spurs. Ozil is capable of doing it in every match he plays. 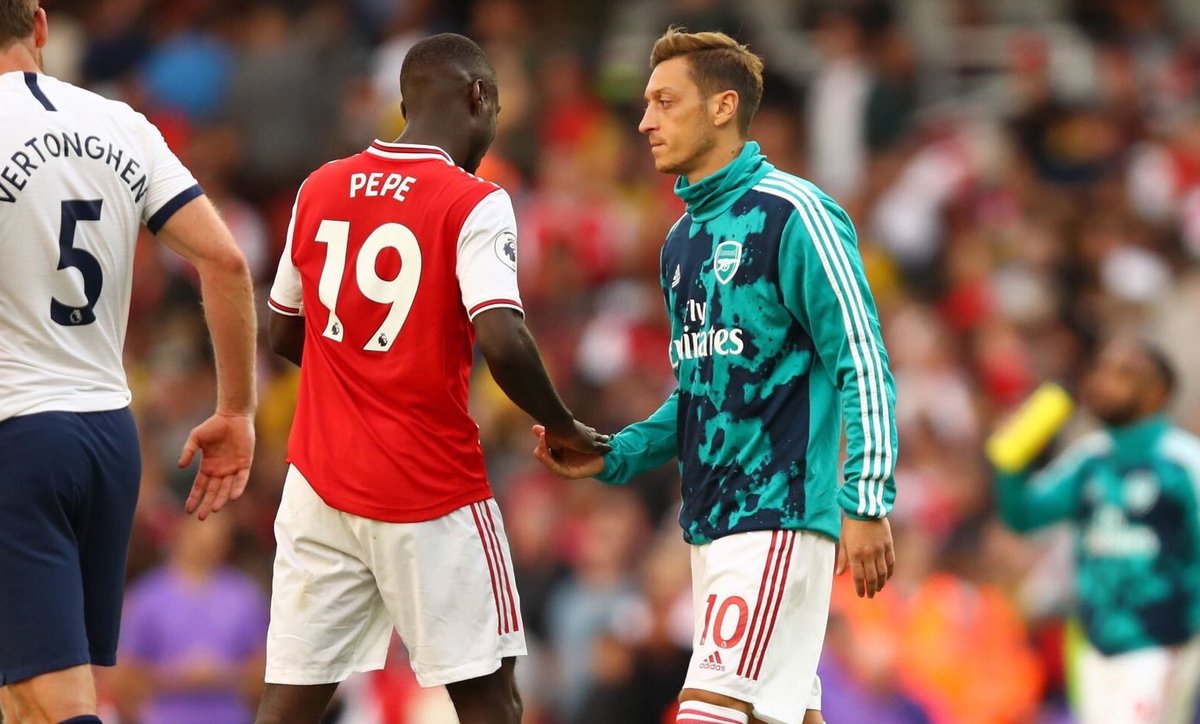 afcstuff
afcstuff
Follow
Merson: “With the lack of service, Arsenal are reliant on their strikers scoring brilliant goals week in, week out but that's not going to happen all the time. The only solution I see would be to play the front three with Özil in the hole & two holding in front of the back four.” https://t.co/ethH2LKckY
Follow
20:24 PM - 3rd Sep 19
20
144

Emery's appointment revealed Ozil's flaws. The Arsenal boss admires energetic players over creators. Ozil isn't a natural workaholic so struggles to live up to his manager's demands. With this same perceived laziness, though, he flourished under Joachim Low, winning a World Cup with Germany. Jose Mourinho and Arsene Wenger also benefitted from his magic. He set the tune for attacks while playing for those three coaches.

The manner in which Ozil uses his outstanding vision to locate strikers is a delight to watch. Despite his troubles and advancing years, he's still capable of producing. He just needs Emery's encouragement.

Lucas Torreira and Guendouzi's presence adds solidity and power to Arsenal's midfield. The pair dispossess opponents with their tackling while shielding the defence, reducing the rate at which it's bombarded. When they do win possession, who will use the ball effectively?

Pepe, Lacazette and Aubameyang had to drop deep in order to get involved against Tottenham. That shouldn't be. Emery prefers Dani Ceballos to handle this task but the Spanish midfielder's consistency is questionable. He was completely missing away at Liverpool and made little difference when brought on against Spurs. Then there's Granit Xhaka. The Swiss offers little beside bookings and costly mistakes. It's better not to track back than worsen the situation. Joe Willock isn't experienced enough for a starting role. The void can only be filled by Ozil.

If Emery fields two midfielders to handle the dirty part, Ozil's so-called laziness will be covered. The Gunners will win back possession and he can make good use of it. It's time to appreciate his offerings. He'll provide talent, experience and act as a mentor for youth to learn from.

Rather than playing hide and seek with his huge asset, Emery must realize Ozil's worth then apply it to Arsenal's advantage.