Pascal Gross has a genuine claim to be Brighton's impact signing with how well he's fared since his summer arrival. The German starred as the Seagulls flew to a 4-1 win over Swansea City on Saturday afternoon. The 26-year-old joined Albion from Bundesliga.2 side FC Ingolstadt and has been a standout performer in his debut season.

Against Swansea City, Gross was the best player on the pitch. Supporters waxed lyrical over his performance. No Brighton player made more touches (64), created more chances (3) or made more successful dribbles (2) than the German midfielder. His stats over the entire season highlight how well he’s fit in with Albion.

In his debut campaign, Gross has scored or created 12 goals in 28 Premier League games. That's 46% of Brighton’s total for the season. No Seagull has contributed more. Operating in an advanced playmaker role, Gross has injected the creativity Brighton were lacking. He may be the difference in their battle for survival.

For £3 million he has a genuine claim to be the signing of the season.

Brighton manager Chris Hughton should certainly take some plaudits. He changed the side's shape from a 4-4-2 during their promotion season to a 4-4-1-1 to introduce Gross behind lone striker Glenn Murray. It has worked perfectly. The duo has scored 15 goals.

After beating Swansea, Albion find themselves 12th in the Premier League with 31 points from 28 games. They can boast two wins and two draws from their last four outings. 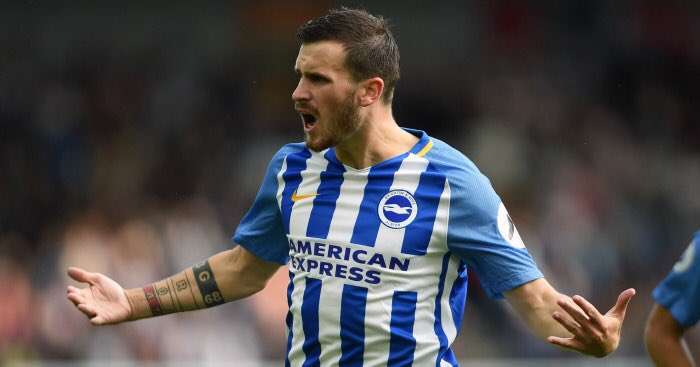 Premier League Panel
PremLeaguePanel
Follow
Whilst the likes of Mahrez, Richarlison+Shaqiri have taken plaudits outside the top 6...

Pascal Groß's excellent season has gone under the radar:

In the glass-half-empty department, Gross was outstanding in the season's first few months, scoring three and assisting five in his first nine league games. Things have tailed off in the second-half. He's only contributed four goals the last 16. Happily, Hughton isn't Jose Mourinho and doesn't see the German as a poor club's Henrikh Mkhitaryan.

Last season, Gross created the most chances (98) in the Bundesliga even though Ingolstadt suffered relegation. The midfielder has experience with struggling sides. His familiarity might have influenced Brighton's eagerness to land his signature.

He’s bounced between the top two Bundesliga divisions for several years. Gross' impressive form when his side was going down is testament to his ability. Clearly, he can perform in difficult circumstances, remaining above the fray. That mental strength has served him well in England.

The former German U20 may not last long at Brighton if he ends the season as well as he began. Hughton has admitted more than one club was keen on his signature when Brighton landed him.

He fits like a glove in the Brighton team, thriving in his creative role, and still has three years left on his deal at the AmEx. Had Brighton instead opted for two strikers, they may have had to resort to a direct approach to get goals. Instead, they have a player who operates between the lines and gives supporters more attractive football to watch.

All that for a paltry £3 million.