Playoffs winners may be denied promotion in FA non-league structure

Governing bodies aren't the most popular things in football at the moment. In keeping with that, the FA continues to make very questionable decisions in non-league football. To be fair, season's end is always a major headache. Restructuring divisions due to promotion/relegation and other issues is an annual morass. Teams must be moved up, down and sideways. New teams apply to enter the pyramid. Others go bust or withdraw. Despite those problems, the FA this week made its own sorry mess.

Big changes to the non-league structure had already been announced for the coming season, but official details have only just been confirmed. The FA’s idea is to cut travel time down so clubs can save financially, with more regionalised leagues the lower you go. On paper, it makes sense. Execution is another matter.

The FA have stated their goal is to have a 1--2-4-8-16 non-league structure for the 2020/21 campaign, One being a nationwide league atop the non-league pyramid, with two, four, etc regional leagues as you descend. The 16 fifth-tier leagues will be localised in the extreme.

The top two tiers of non-league football seem set in stone. The National Premier is the one division below League Two, with the National North and National South the next tier. The new policy doesn't affect them.

This season, there were three leagues directly below the North and South. Each had an automatic promotion space and a playoff winner who moved up for the new season. Six sides were promoted, the bottom three teams in both the Nationals North and South relegated.

Here is where the FA begin to lose their way. If two teams are to be promoted from all four leagues, it stands to reason that four should go to the North, four to the South and that four apiece should come down from said. Relegating one more team from each of the two second-tier divisions is the simplest solution. Naturally, the FA made another choice. 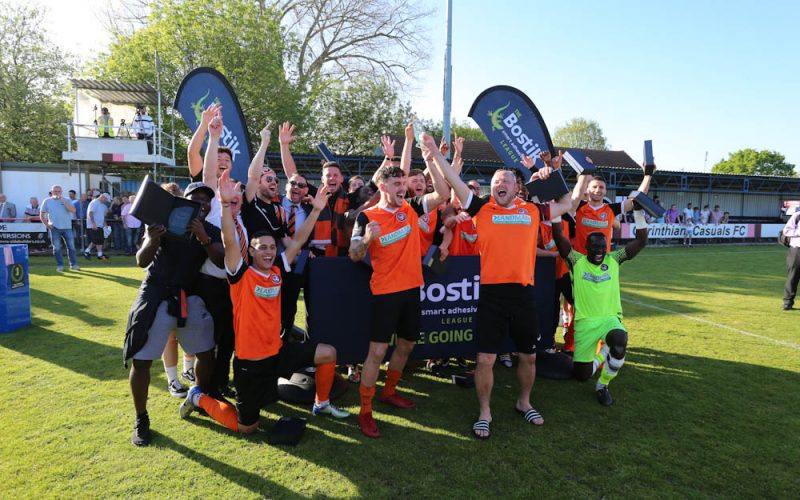 The Non-League Paper
NonLeaguePaper
Follow
EXPLAINED: How the new Step 3 and 4 play-off structure for 2018/19 will work...

With the extra Southern division in place, the four champions are all promoted. The traditional playoff structure from second to fifth place remains, but the playoff winners are no longer guaranteed promotion. Instead, the four successful teams face an additional, so-called Super Playoff round that pairs the quartet, with geography the primary matching factor. The Super Playoff will be one-leg played at the side with the best points-per-game ratio during the season. The two winners will be promoted to step two.

If that sounds more complicated than necessary, the leagues below are even more confusing.

In last season's fourth tier, there were six divisions with two sides promoted from each. The extra Bostik League this term takes the total to seven, complicating the numbers. There will be 12 promotions spots to fill, with seven taken by the respective champions. That leaves five places for seven divisional playoff winners. The five with the best points-per-game ratio will win promotion from step four. Two sides will have fought their way through the playoff rounds for nothing.

Simple maths should tell the lower-seeded teams beforehand that there is nothing in the playoff for them other than to ruin it for someone else. Will the money on offer be sufficient to motivate such teams? Or will we see too many matches like France v Denmark, who had nought to play for having been promoted, everything to lose through injury and thus closed out their World Cup group stage with a gentleman's agreement goalless draw?

Further, if the FA were willing to add another round to the playoffs further up the pyramid, why this lazy solution here? Perhaps it will all be fine when the desired system is finally implemented. Until then, it will be a right mess.

The non-league structure has never been simple and always a nightmare. The FA's solution makes it worse in the short term. Was I a fifth-place club's chairman, I'd be insulted to be asked to participate in a tournament in which I have no chance to win. I'd be wondering if it was all a bad joke.