Is Arsenal set for a revival?

Arsenal flattered to deceive last season. The promise of new heights under Unai Emery failed to materialise as the Gunners lost in the Europa League final and missed out on Premier League top four. Failure on both fronts guaranteed the dreaded Thursday night football.

After fighting hard for a change in the dugout, this wasn't what Arsenal's faithful envisaged. Winning trophies and competing among Europe’s elite is what real success looks like.

To be fair to Emery, such requires having top talent. The Gunners need their best players fit and in-form to mount a serious challenge for silverware.

Arsenal may parade one of the Premier League's stand out forward lines but shutting the back door is a major problem. They kept only eight clean sheets last season.

This dismal record is largely due to the absence of two key defenders. Rob Holding and Hector Bellerin featured in the back-line at last season's beginning. Their presence made for a coercive unit, one which was more difficult to break down. Unfortunately, both got injured and were ruled for a long period.

That's severely affected the Gunners. A weakened defence featuring Ainsley Maitland-Niles, a midfielder who was converted to right-back, became the team's Achilles heel. Several bad results including a loss and a draw against Leicester City and Brighton respectively resulted in a fifth-place finish. Those points dropped made the difference between Champions and Europa League football. To make things worse, it was their biggest rivals, Tottenham Hotspur, which benefitted. 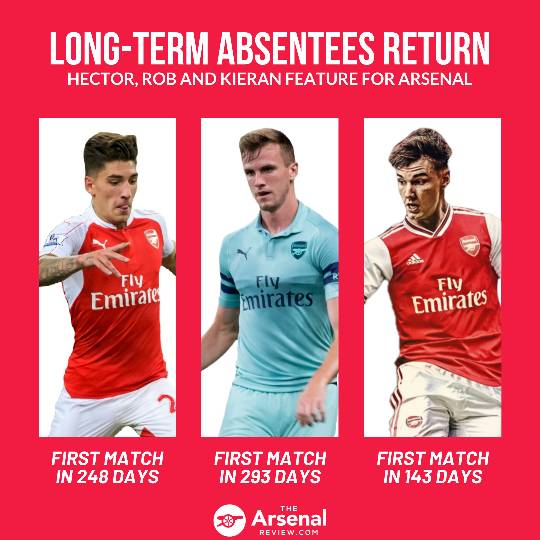 The Arsenal Review
thearsreview
Follow
Holding, Bellerin and Tierney were out due to injury for over 680 days combined 😮

Arsenal's performance so far this season, conceding ten goals in six games and keeping just one clean sheet, suggests Emery got his summer priority wrong. He needed a top-class center-back, not another forward.

David Luiz showed quality during his time at Chelsea, but the Brazilian's career is now winding down. At 32, his best option would have been to move to a retirement league like MLS or return home as many South Americans have done over the years. The Gunners require a defender in Virgil van Dijk's mold to solidify their leaky rearguard.

For now, Holding and Bellerin's return can make a difference. The two featured in the EFL Cup win over Nottingham Forest in midweek. They underlined their importance by helping to keep a clean sheet as well as contributing to the scoreline with a goal and an assist respectively. The opposition may not have been Premier League level but the pair's performance showed they can play an important role in Arsenal's upturn in form.

As, too, can Kieran Tierney. The left-back's expected to hold a regular position after returning from injury. He, Holding and Bellerin are all in contention to start the next match away at Manchester United on Monday night.

With extra quality up-front owing to Nicolas Pepe's addition, defensive solidity is all that's missing for the Gunners. Achieving a solid backline can spark a revival, one which will enable them to challenge for a Premier League top-four place, minimum.

Emery's side currently sit in fourth. All trailing three points behind, Tottenham, Manchester United and Chelsea are blowing hot and cold. A consistent Arsenal can be the closest to give Manchester City and Liverpool a run for their money.