Richarlison: Have Brazil found the heir to Ronaldo's throne?

Eyebrows were raised in some quarters when Everton paid Watford £35million, potentially rising to £50million to bring young Brazilian Richarlison to the Merseyside. Marco Silva bought the 21-year-old from Fluminense to Vicarage Road last season. He was an instant hit, scoring some hugely important goals as the club began the campaign in top form.

However, his goals quickly dried up as the team began to struggle amidst interest for the manager from Everton. Silva was subsequently dismissed on grounds of a lack of focus and the player's form dipped even further resulting in only five goals and four assists for the team in the 2017/18 campaign.

The Portuguese manager sought a reunion with the player after taking over at Goodison Park this summer. Despite placing a huge price on Richarlison, the Merseysiders broke a club record to get their man. The Brazilian wasted no time in assuring the club's supporters of his value; scoring a brace on his debut as the Toffees held Wolves to a 2-2 draw even with a man light.

He netted the second in the next match as Everton secured a 2-1 win against Southampton in the first home game of the season. He was however, sent off against Bournemouth in the following game, with the Toffees being held to a 2-2 draw. Discipline, or the lack of it, is a part of his game that he simply has to improve upon. He needs to be a dependable, reliable teammate.

Regardless, his early season form shows a player ready to make the headlines for the right reasons. It is those superstar displays that convinced Tite to hand him a call-up to the national team. The Nova Venécia-born player was one of the new additions to the national side as Brazil aims to reshape their squad following a disappointing outing at the World Cup.

The former Fluminense man made his debut in Brazil's 2-0 win over the United States coming on as a second-half substitute. He was handed a full debut in the next game against El Salvador on Wednesday and took full advantage to make a statement. Two brilliant goals showed the quality of a top striker. 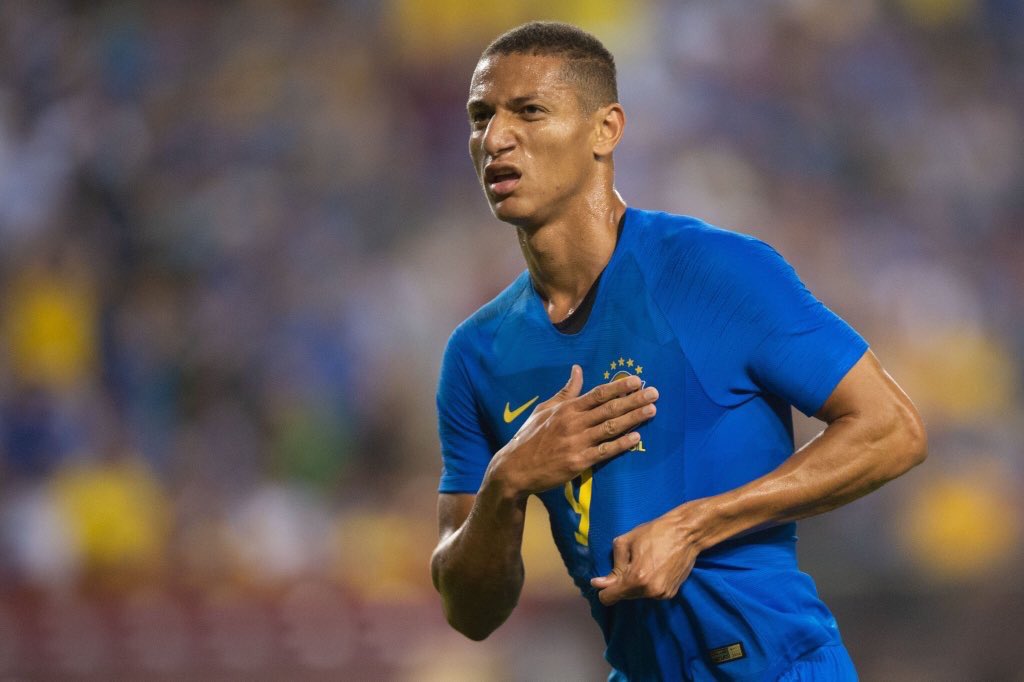 THE BLUE ROOM
TheBlueRoomEFC
Follow
Richarlison since moving to #EFC:

🔵 3 goals in less than 2 and a half games in the Premier League.

🔵 Given the number 9 shirt and makes debut as a sub v USA.

Selecao have a history of parading top-class forwards that represent some of the world's best. From the legendary Pele to Zico, Romario, Bebeto and Ronaldo it's been a story of deadly front-men that bring tremendous success to the national team.

However, since the great Ronaldo made his exit from international football, Brazil have missed a top-notch centre-forward that is a natural goal scorer. That may also explain why they have come up short in international competitions in recent times.

But could Richarlison represent that missing piece that will add the cutting edge to the national team's attack? After decades since he hung up his boots, the great Pele still holds the record for the highest goalscorer in Brazil, 77. But since 1994, Ronaldo became the reference point for a natural-born world-class striker performing for club and country.

The former Real Madrid and Inter Milan striker ranks second in the all-time top scorers' chart for Brazil with 62 goals in 98 appearances. Although Paris Saint-Germain forward Neymar is getting close to that number, he is not considered a striker for the national team.

Manchester City's Gabriel Jesus has held down the number nine spot in recent times with Roberto Firmino acting as back-up. But both players failed to live up to expectations in Russia. The 21-year-old former Palmeiras star ended the tournament with only one assist in five matches while the Liverpool man scored just once in four appearances.

A lack of goals cost the team progression in the competition. With Copa America coming up in 2019, it's time to fix the problem. Richarlison could be the solution if his recent form goes the distance. His share drive and deadly finishing put him in a category where he could be the next best thing after top Brazilian strikers from years gone by...