Roma 3–0 Barcelona: How the Giallorossi did the unthinkable

We wanted a night to remember. Roma didn't disappoint. They did the unthinkable, humbling Barcelona in the Champions League quarter-finals.

On 9th March last year, Catalonia was lit with excitement when Barcelona overturned a 4-0 deficit to send Paris Saint-Germain crashing from Europe. Roma turned the tables on the Catalans last night.

During one crazy game, a team of determined footballers from Rome made Barca look pitiable for the first time this season. Ernesto Valverde’s men were stung with the venom of resilience, tenacity, teamwork, skill and an overwhelming home support. The Spanish coach could only watch as his team collapsed in an uncharacteristic manner.

It seemed Barcelona would ease through to the Champions League semi-final after thumping Roma 4-1 in the first-leg at Camp Nou. The Giallorossi had other ideas, though. An away goal meant the fourth-placed Serie A side would progress to the last four with a 3-0 victory. Unbelievably, they did it.

The Barca faithful will always remember 11th April. Bitterly. On this same date last year, the Catalan giants succumbed to Juventus 3-0 in Turin - a result that saw them crash out of the Champions League. History has repeated, albeit with a different Italian conqueror.

How Roma felled the giant

Eusebio Di Francesco must have given his charges a rousing speech prior to kickoff. It worked. Roma produced a collective effort, with the sole intent to bully and press their visitors into painful submission.

The Red and Yellow had a foot in the door as early as the sixth minute. Daniele De Rossi’s cross-field pass was met beautifully by Edin Džeko. The Bosnian made no mistake to poke the ball past Marc-Andre ter Stegen.

Roma continued to cause problems for Barca's defence but failed to reduce the deficit until after the interval. In the 57th minute, the Stadio Olimpico erupted to a roar of PENA when Gerard Pique impeded Džeko’s run into the area with a shirt tug. Referee Clement Turpin pointed to the spot. De Rossi dispatched. The unthinkable now seemed possible.

Seven minutes remained for Roma to strike the killer blow. After scoring an own-goal in the first leg, Konstantinos Manolas made amends. The centre-half sneaked in at the near post to head home Cengiz Under’s corner.

The Roma defence completed the job, holding on for their fifth consecutive clean sheet in this season's competition. 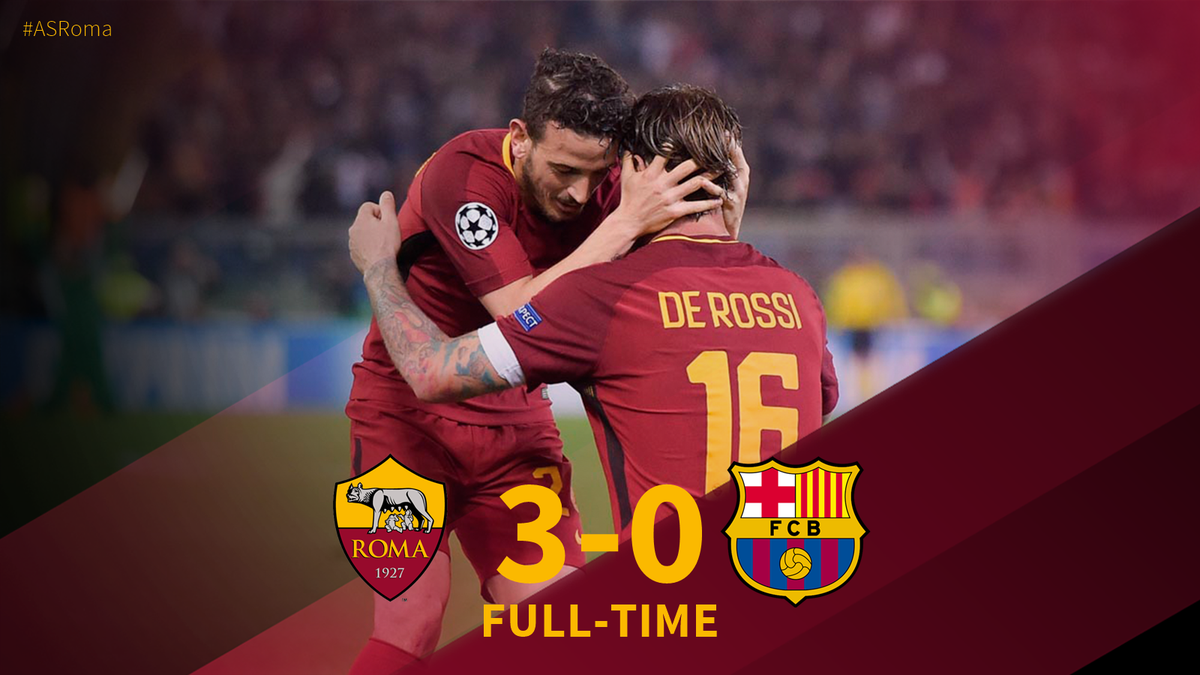 AS Roma English
ASRomaEN
Follow
Are you not entertained?! Is this not why you are here?!

The cracks had been appearing for Barcelona. Their first leg triumph was flattering on paper, but they were given a big helping hand by two own goals. At the Camp Nou, Blaugrana struggled against Roma’s intensive pressing style. The warning signs were there before travelling to Italy.

Valverde’s decision to drop Ousmane Dembele proved costly. Lionel Messi and Luiz Suarez can dismantle any team but on a night when the supply is cut and the pair gets shackled, a third force is required. Dembele's introduction with five minutes left sparked some life into a slumbering Barca attack. The Roma supporters had hearts in their mouths when the French youngster blazed a shot over the crossbar with just seconds on the clock.

Roma wanted it more. The victory was deserved. The Giallorossi will now feature in the semi-finals of Europe's elite club competition for the first time in 34 years.