The second of a six-part series taking a look at the long term future of Scottish football.

When Scotland opened its pyramid system to promotion in 2014-15, giving non-league sides a route into the professional game, it was a breath of fresh air sweeping through the nation’s stale footballing landscape. For years, the same old teams had battled it out at the bottom of the pyramid. East Stirling, Sir Alex Ferguson’s first club as a manager, exemplified the issue, finishing bottom of the league season after season without any threat of relegation.

The beleaguered Stirlingshire club were the first to fall through the trapdoor, duly losing their place to Edinburgh City after yet a dreadful 2015-16 campaign. But those dreaming of a new era for Scottish football celebrated too early; since the change, only one more club have come up; Cove Rangers, who replaced Berwick Rangers last season (currently seven points clear at top of League 2 and seemingly destined for a second consecutive promotion).

It’s hardly surprising that new clubs coming into the league are few and far between. The winners of the two fifth-tier competitions below Scottish League 2, the fledgeling Lowland League and the venerable, well-supported Highland League, must face each other in the playoffs before the winner takes on the bottom club from League 2. With only one promotion spot between two competitions, containing a total of 33 teams, promotion is a tough route, with many of the stronger clubs denied promotion through small strokes of bad luck. But when the final step involves a two-legged playoff against a team from a higher league, it’s no wonder only 2 out of 5 seasons have actually seen a club promoted.

There’s no prospect of that system changing in the immediate future (though tier 5 clubs are certainly improving on and off the field, with a solid cohort in each league champing at the bit for promotion) but the Scottish FA is at least showing a willingness to bridge the gaps between the Football League and the junior football association. This is an arcane system of amateur and semi-professional leagues, which has helped develop professionals like Partick Thistle legend Kris Doolan and former Hamilton stalwart Darian MacKinnon. 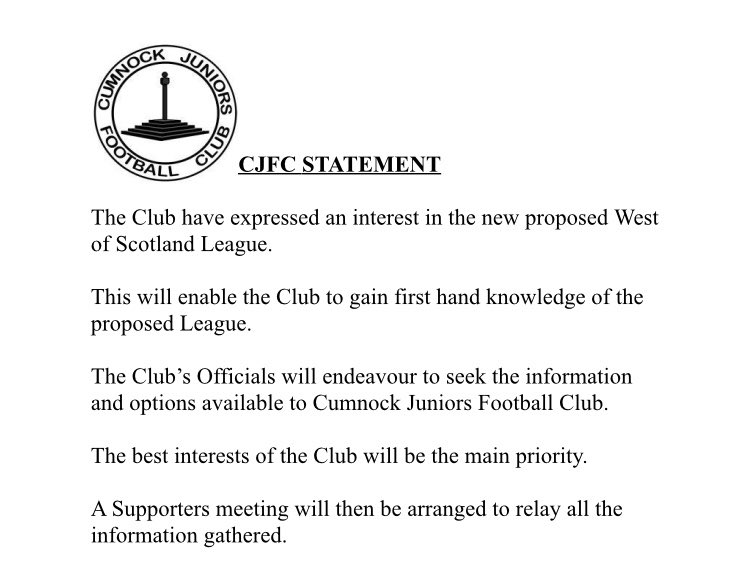 A new West of Scotland League is being created at tier six. The competition will begin next season, comprised of junior clubs interested in long-term progression, with promotion and relegation to the Lowland League. Crucially, this means the junior leagues (in Scottish football parlance, that means the network of competitions not directly tied to the senior pyramid, rather than under 9s or whatever), will lose some of its hold on the hundreds of clubs participating in their competitions. West of Scotland League clubs will now have the option to join a league where there won’t be a huge increase in expenditure but the option for progression up the leagues at least exists.

This gives crucial pyramid coverage to a region that lacks a means of progressing up the ranks. There are strong clubs in the juniors here, who could follow the lead of Kelty and Bonnyrigg by moving up the pyramid. Clydebank, the new incarnation of the once proud League club, as well as venerable junior clubs like Irvine Meadow, Kilwinning Rangers and Cumnock have all expressed interest in joining the competition which is set to begin next season.

This development is likely to see further integration in the north of the country. The Highland League, which currently chooses new teams by invitation only, is set to adopt the North Caledonian League as a feeder. The scent of change hangs heavy in the air.

It’s a long way off, but this could be the first baby step on the great journey to expanding the SPFL to reasonable numbers. Livingston boss Gary Holt recently called for more teams in the top flight, a move he argues would make the league more competitive and interesting.

While Holt’s idea makes sense - there’s no doubt teams playing each other three or four times each term bores the punters and makes for a lack of innovation – the pyramid isn’t there to support it yet. Building from the bottom is a good start to giving the Scottish pyramid a desperately needed bulking out.