Who are the Premier League transfer window moneymakers?

The transfer window is intended to sign players who can improve a club. To use it for any other purpose invites derision. Fans will tell you a club that doesn't spend is either too small or lacks ambition. Developing and selling on talent is accepted as a life-sustaining activity at smaller clubs. That does nothing to raise their status, however. Failing to spend money when you have it tends to inspire movements like the ones to oust Newcastle's chairman, Mike Ashley and Manchester United owners, the Glazer family.

In the Premier League, the quality is so high, the competition so intense and the money at stake so astronomical that trying to profit off your youth academy rather than fielding the strongest team possible practically guarantees relegation. Teams who do not spend, like Cardiff City last season, tend to go down. Of course, teams that do invest aren't guaranteed survival either. Ask Fulham. Thus the balance between needing to buy and sell is a delicate high-wire act for many.

Southampton enjoy a reputation as a top-six stop-and-shop. The young players sold to the Premier League elite are legion, from Theo Walcott to Alex Oxlade-Chamberlain, Ritchie de Laet, Luke Shaw, Nathaniel Clyne, Morgan Schneiderlin, Toby Alderweireld, Gareth Bale, Adam Lallana, Sadio Mane and Virgil van Dijk. They've feathered the nest of two Champions League winners and another finalist in Liverpool, Real Madrid and Tottenham. This season, however, their expenditures more than doubled despite raking in £22.9 million for Matt Targett, Sam Gallagher and Charlie Austin. After fighting off relegation for the second straight season, it's easy to understand why the Saints felt they needed to bring in outside talent.

Championship winners Norwich, on the other hand, effectively broke even with an extremely cautious approach by Premier League standards. The club sold Marcel Franke for £1.4 million to finance the purchases of Sam Byram from West Ham and Daniel Adshead from Rochdale for £1.5 million combined. They dipped into their reserves to loan keeper Ralf Fahrmann from Schalke for the season for £2.7 million. That was the extent of their business. If that policy expressed confidence in the players already in the squad, a 4-1 defeat to Liverpool on Matchday One posed the question of whether that faith was well-placed.

Newcastle;'s Mike Ashley is pegged as an owner who cares more about the bottom line than investing in the club. In 2019, his priorities have become more balanced. After setting a new club record-signing with Miguel Almiron in January, Ashley broke it in this window by acquiring Joelinton from Hoffenheim for £39.6 million and Allan St Maximin from Nice for £16.2 million. The investment was partially offset by top scorer Ayoze Perez's £30.1 million sale to Leicester but the Magpies still went well into the red. Due to past history, it's difficult to believe Ashley is showing ambition even when he invests heavily, but the fact is he has taken a financial loss in this window. Make of it what you will.

Leicester City walked the line between ambition and financial responsibility in this transfer window with nimble feet. Harry Maguire's £78.3 million late sale to Manchester United paid for the business done until that point. One admittedly influential player out but at their price and to bring two important players into the squad is not bad business. Youri Tieleman's loan from Monaco was made permanent while Ayoze Perez offers a viable option up front in addition to Jamie Vardy. Only Dennis Praet's late addition put the Foxes in the hole and then by less than £20 million 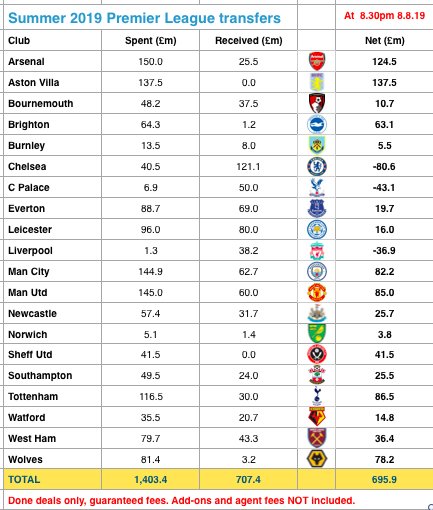 Nick Harris
sportingintel
Follow
Nearly all over for #PremierLeague 2019 summer transfer window. A (final) alphabetical version of the table this time. About £1.4bn gross spend, pending news on Iwobi and a possible Saints defender. NB: sales will still be allowed for a few more weeks. https://t.co/0tLAXogJ0p
Follow
20:55 PM - 8th Aug 19
69
124

Three teams did turn a profit in the window. Of them, Crystal Palace are the least surprising. The club's sole ambition is Premier League survival. Therefore, they felt comfortable allowing burgeoning fullback Aaron Wan-Bissaka go to Manchester United for £49.5 million. Only solid midfielder James McCarthy and veteran forward Jordan Ayew came into the squad for £5.5 million combined. In addition, the Roy Hodgson chose to hold onto his primary creator, Wilfried Zaha, despite heavy interest in the winger. A right-back can be replaced far more easily than a dynamic scorer. Palace lined their coffers while not putting themselves in harm's way.

Surprisingly, the other two moneymakers were top-six clubs.

No one is going to accuse Chelsea of lacking ambition while they serve a transfer ban. Especially when they had the foresight to sign Christian Pulisic before the ban took effect and took advantage of the pre-existing clause in Mateo Kovacic's loan to make the Croatian permanent without violating the terms of their sentence. Keeping Eden Hazard simply wasn't an option, so why not make lemonade from lemons?

Liverpool are the side on which the jury will remain out until May. The Champions League winners only ceded the Premier League title to Manchester City on the 2018/19 season's final day. Owner John Henry promised the Kop that the Reds would focus on the league this campaign win their first division crown in three decades. He did not back them in the market, however.

To be fair, Henry invested £320 million in the previous two seasons to transform his team into a Champions and Premier League favourite. This summer only teenagers Sepp van den Berg and Harvey Elliott and veteran keeper Adrian arrived, the teenagers for nominal amounts, the erstwhile West ham shot-stopper on a free. Meanwhile, Simon Mignolet and Danny Ings were allowed to go elsewhere [Club Brugge, Southampton] for a combined £26.3 million.

While manager Jurgen Klopp prefers a smaller, more tightly-knit squad, he risks injury whereas direct title rivals Manchester City just keep on spending. You can't prevent bad luck but Pep Guardiola prefers to give himself the wiggle room to mitigate its effect. Klopp lets it ride. Reds supporters won't be happy if his don't-fix-what-isn't-broken approach doesn't leave him with spare parts in the event his squad does break down.

That's the Premier League for you. It's perhaps the only place where, if you're not losing millions, you're not doing it right.