Serie A bears a striking resemblance to playground football. Bear with me. I’m not disparaging Lega Calcio’s quality at all. Nor am I taking a dig at all the ugly name calling and crude mimicry that rains down from the stands although there is that. I’m talking about the managerial carousel.

Do you remember how games would stop during playtime if they were too lopsided and the ‘captains’ would trade players to even out the sides? Italian football interchanges managers in a similar fashion albeit for much more selfish motives.

Virtually every Italian manager worth his salt boasts more than one top Serie A club on his CV. Marcello Lippi held the reins at Napoli, Juventus and Inter. Fabio Capello ramrodded Milan, Roma and Juventus. Carlo Ancelotti guided Juventus, Milan and now Napoli. Massimiliano Allegri won Scudettos with Milan and Juventus. Even the merry minstrel Claudio Ranieri, who never won a top-flight league title until his 2015/16 run with Leicester, enjoyed spells at Napoli, Fiorentina, Juventus, Roma and Inter. The most notable exception, former Juve boss Antonio Conte, appears set to take command at Inter if Fabrizio Romano’s report in the Guardian is true.

Switching allegiance as a player or coach is no big deal in Italy. Andrea Pirlo did the Turin/Milan trifecta, suiting up for the Rossoneri, Nerazzurri and Bianconeri. Leonardo Bonucci could be Italian for Bilbo Baggins with Juventus the Shire and Milan the Lonely Mountain. The defender journeyed there and back again.

Italian football is nothing like the English game, where Rafa Benitez was reviled by Chelsea fans for taking charge at Stamford Bridge years after his time as public enemy number one with Liverpool had passed, or La Liga, where Luis Figo and the Brazilian Ronaldo were put down as traitors after moving from Barcelona to Real Madrid. All that is expected is to give your all while wearing the shirt then all the best to you when you leave.

Considering the aforementioned issues with racist supporters, it’s an amazingly enlightened attitude but given that it does exist, neutral observers shouldn’t be too shocked to see Luciano Spalletti pacing the Juventus technical area next season.

First, Spalletti deserves to be considered a top Italian manager even though his greatest success came in the Russian Premier League which he twice won with Zenit St Petersburg. He also won the Russian Cup and Super Cup while with the Lvy, adding those trinkets to his two Coppa Italia, Supercoppa and two Serie A Coach of the Year honours.

Second, every other top Italian manager called the shots for the Old Lady at least once in their career. Think of it as a rite of passage.

Third, what makes him wrong for another season at the Giuseppe Meazza makes him right to take over for Allegri at the Allianz Stadium. 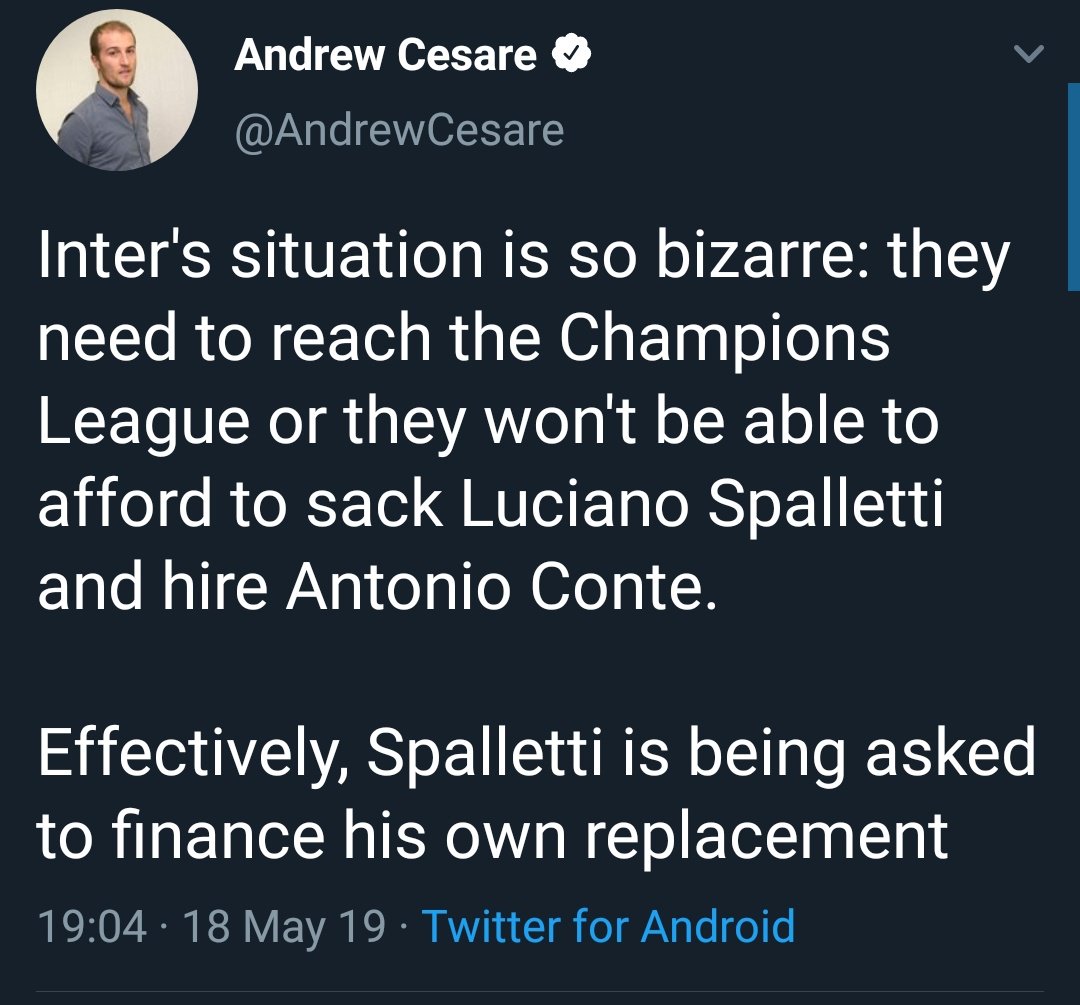 Radja Nainggolan’s side trip on returning to Rome early in the season was the first problem. The club came down hard on the Belgian’s partying and smoking. He responded angrily on social media. It didn’t help Spalletti’s standing that the midfielder followed him from the capital when the boss ended his second spell with the Giallorossi but, eventually, the matter sorted itself.

Just when things quieted down, Mauro Icardi’s wife and agent, Wanda Nara, aired the striker's contract difficulties on Italian television, claiming a rift with other players, naming names and sparking a brouhaha that cost her hubby the captaincy and several weeks in exile. Only an injury to Lautaro Martinez brought him back into the fold when otherwise he might have been done for the year.

As he did with Naingollan, Spalletti supported the club decision but also left the door open for a return. Playing the facilitator rather than taking a hard line has some questioning whether a no-nonsense coach like Antonio Conte or the still highly-regarded Jose Mourinho might have Champions League qualification already wrapped up and the Beneamata challenging Juventus for the Scudetto?

Instead, Inter enter the final matchday clinging to fourth, trailing Atalanta on goal difference, leading Milan by a single point, Roma by three. The six-goal difference between Spalletti’s former and current clubs isn’t sufficient to rule I Lupi entirely out of the race just yet.

Meanwhile, Allegri exits Juventus with five consecutive Scudettos failing to compensate for unfinished continental business. Even with Cristiano Ronaldo, the Zebras couldn’t end their Champions League hoodoo. The 600-goal man made noise during the campaign about the manager’s conservative tactics, protecting one-goal leads rather than going for the jugular. Owner Andrea Agnelli apparently agreed. The next boss must play a more enterprising style.

Spalletti certainly qualifies in that regard. He prefers an attacking style featuring wing play that will assuredly appeal to Ronaldo and Moise Kean. Discipline shouldn’t be an issue in Turin unless Nainggolan or Icardi follow the gaffer to his new club. The Old Lady does need to loosen up and have some fun, however.

The knock against the 60-year-old is that he has no European success on which to hang his hat. Critics outside Italy expect a team with Champions League ambitions to target a former winner to take them over the final hurdle. Juve tried that on the playing side with Ronaldo but recently ruled out Jose Mourinho as their new boss.

Sky Sports News
SkySportsNews
Follow
Jose Mourinho will not become the next Juventus manager despite being endorsed for the role by Cristiano Ronaldo., Sky Sports News understands.
Follow
22:19 PM - 23rd May 19
1430
8807

Pep Guardiola’s name is bandied about but the Catalan hasn’t conquered the continent since leaving Barcelona. It’s a complete stretch to believe he would leave the unconditional support system nurturing his success in Manchester. It's even more difficult to imagine the Bianconeri willing to sell their catenaccio souls to become tiki-taka divas.

That leaves Carlo Ancelotti. While the three-time Champions League winner might decide that ‘if you can’t beat ‘em, join ‘em ‘ is the best policy, the more pressing question is does Juventus want him? While the All-Powerful Eyebrow is tactically flexible, you’d liken him to Allegri as much as anyone when pressed to pin down his style.  He’s a winner wherever he goes but he adapts to the players at hand. With the Old Lady, he’d almost certainly maintain Allegri’s status quo. That is not what Andrea Agnelli desires.

If Inter set the carousel in motion by bringing in Antonio Conte, Luciano Spalletti is as good a bet as any to become the next Juventus manager before playtime is over.