The downfall of Marco Silva

There was an air of optimism around Everton at the start of this season. There has been for a while, since the Toffees acquired the billionaire owner that they had dreamed of since the shoestring-budget days of Bill Kenwright’s majority shareholding. The word ‘project’ has been commonly used in relation to the Merseyside club since Farhad Moshiri came in, and this project now appears to be crash-landing before even taking flight.

Director of Football Marcel Brands arrived from PSV Eindhoven in summer 2018, at the same time as manager Marco Silva. Hundreds of millions of pounds were plugged into their project, and players were bought specifically to Silva’s requirements. Now, after losing nine of their opening fifteen fixtures, the manager’s time at the club has officially ground to a halt.

Everton’s favourable opening fixtures made fans think that this could be the season where the club would finally break into the ‘top six’. The established top six from the last few years appeared to have finally fallen as the season began, with several of them out of form, and so a chance opened up. Everton didn’t take it and now find themselves in 18th place in the Premier League with the threat of relegation looming large.

There’s no question that Marco Silva was unlucky in several aspects. For example, a midfield injury crisis has crippled his side in recent weeks and even resulted in him changing formation from a 4-2-3-1 to a 5-4-1 system. New signing Jean-Philippe Gbamin has only managed to play 134 minutes so far this season due to a thigh injury, and Andre Gomes was recently sidelined for what could be the rest of the season with a broken ankle. Fabian Delph has struggled with fitness, while Morgan Schneiderlin suffered a couple of knocks which have ruled him out of action on several occasions. This heaped pressure on the shoulders of 21-year-old Tom Davies, and his recent form simply hasn’t been up to the standard required. Everton were also unable to hang onto key player Idrissa Gueye last summer, with the player moving to Paris Saint-Germain in a deal worth £29million. They've clearly missed him. 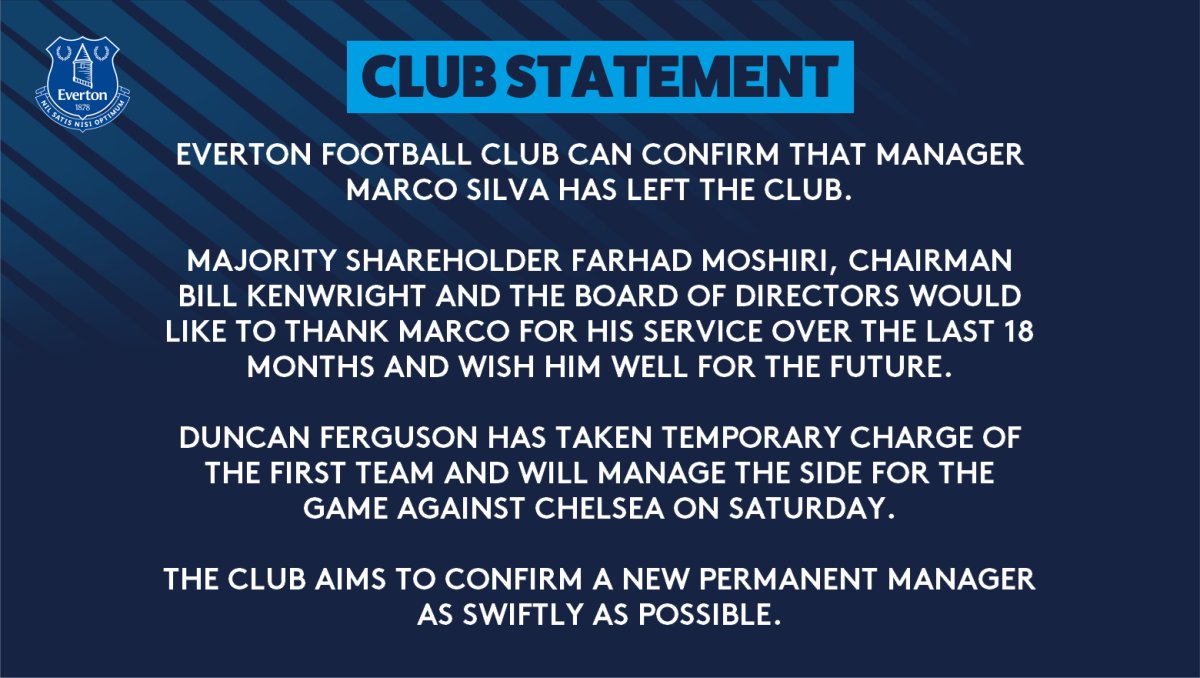 Poor decisions have blighted Everton’s season so far, too. In a 3-2 defeat to Brighton in October, VAR over-ruled the referee to award a penalty for the first time in the Premier League. The league later confessed that the VAR official had made the wrong call, which arguably cost Everton crucial points. A 1-1 draw with Tottenham in November brought more drama, with a handball in the penalty box from Dele Alli going unpenalized despite VAR showing the interference several times on-screen. In a campaign where there are still just five points between the relegation zone and the top half, these incidents were key and at least in part contributed to Silva losing his job.

However, it can’t just be put down to luck alone. The manager’s stubbornness to accept that his zonal marking approach wasn’t working at Everton cost his team important goals both this season and last, before he finally gave in to playing a hybrid system of zonal and man-marking in recent months. His reactive substitutions have been criticised, as well as his habit of throwing attackers on without regards to formation when his side have been behind. In fact, Everton never won from being behind on 28 occasions under Silva, and only won five points from those games.

Silva was also let down by the club's recruitment in the summer. Despite a spending spree of £118.5m, the Portuguese gave the board several key positions which he needed strengthening - including centre-back, a left-footed right-winger, and a striker. Everton missed out on most of their targets, such as Kurt Zouma who had spent the previous season on loan and were forced to settle for their second- or third-choice target in many positions. The club failed to bring in a centre-back altogether, despite reported last-ditch moves for Marcos Rojo and Chris Smalling from Manchester United.

The Portuguese coach wasn’t helped by his players, either. Although there wasn’t an obvious period where the players stopped playing for the manager, there was a severe lack of leadership evident in the squad. Davies was handed the armband several times last season, but Silva abstained from doing so on occasions this season as it appeared to affect the midfielder’s performances last term. Seamus Coleman was given the captaincy after last year’s club-leader Phil Jagielka left for a return to Sheffield United, but the Republic of Ireland international has suffered injuries this season, too. Gylfi Sigurdsson has been made captain for some games but is clearly not the natural leader Everton are craving.

Results simply haven't been good enough at Everton. Silva leaves with an overall win percentage of just 35.8%, lower than all of Everton’s permanent managers since before David Moyes. The next appointment is crucial, and it is, in fact, Moyes who is the bookies’ favourite to take the job after first-team coach and former player Duncan Ferguson was put in temporary charge. Many Evertonians see Moyes’ prospective appointment as a step back, and that times have drastically changed since his first stint with the club. However, the last extended period of stability the club has had was under Moyes, and stability is exactly what Everton need in this moment, with four permanent managers having attempted to acquire it since the Scot left in 2013.

Everton’s shortlist apparently includes ambitious names such as Mauricio Pochettino, Carlo Ancelotti and one of the world’s highest-paid managers in Shanghai SIPG’s Vitor Pereira. However, the stat remains that the club has only ever won silverware with a former player in charge. If Mikel Arteta were to leave his assistant role to Pep Guardiola at Manchester City and choose Everton over Arsenal to begin his managerial career, there would be potential for that feat to continue.

Everton must find stability if they are to fulfil any of their ambitions and steer clear of the relegation zone completely to have any chance of continuing with their plans for a new stadium. Although the Everton job appears as a poisoned chalice judging by recent years, it remains to be seen who is willing to take the risk...