Last season, Pep Guardiola orchestrated perhaps the most imperious campaign the Premier League's ever seen but the Spanish Manager is not one to rest on his laurels. Guardiola’s quest for perfection continues this season. Manchester's blue half continues to outperform their Premier League rivals in most convincing fashion. They've done so in large part because of two players, a Spaniard and a Portuguese, both named Silva.

City’s Centurion season had many heroes. One player who played a crucial part was David Silva. He arrived two seasons after Sheikh Mansour purchased the club in 2008. Immediately, the Spaniard made himself indispensable to the Citizen's rising domination of English football. That hasn't changed. Silva has been the spine in City's attack, winning three Premier League titles, as many League Cups, two Community Shields and an FA Cup.

At 5' 7", Silva is a feisty attacking midfielder who can play almost anywhere in attack. His effectiveness is based on an uncanny ability to find open space. He's a gifted playmaker with the strength to hold the ball in tight positions, swift feet and the confidence to thread balls through knots of defenders.

Yet, for a long time, Silva has felt underrated, rarely the star, always destined to provide a pretty backdrop to a more dynamic protagonist, from Mario Balotelli to Edin Dzeko, to Sergio Aguero and Kevin de Bruyne. Not anymore. Under Guardiola's tutelage, his strengths increased, his weaknesses diminished. At 32, he's sharper, more precise and opportunistic than ever. The attack goes through him. The club's 67 goals in all competition is highest among clubs in UEFA's top five leagues. Pulling double duty in the Premier and Champions Leagues, he's scored eight of those, assisted another four and been an integral part in dozens.

His aggressive creativity has many believing he's the Premier League's best player. The term "free eight" has been used to describe the position Silva and his partner in crime, Kevin De Bruyne, occupy in Guardiola's system. This role, somewhere between attacking midfielder, inside forward and deep-lying playmaker, affords the freedom required to get the most out of Silva's positional intelligence.

He terrifies defences by occupying dangerous positions, forcing fullbacks and centre-backs into awkward decisions. His handiwork enables teammates to take advantage of the space he creates. He continues to be the lynchpin in City’s midfield despite the attention defenders can give him in de Bruyne's absence. 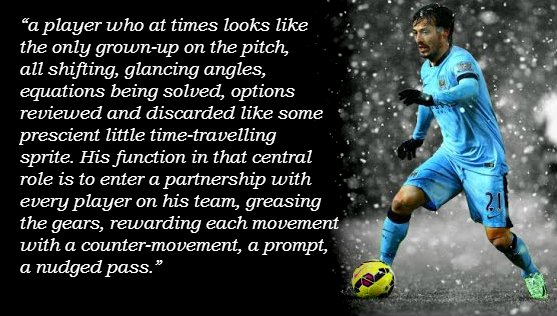 Barney Ronay Quotes
RonayQuotes
Follow
“a player who at times looks like the only grown-up on the pitch" - Barney Ronay on David Silva #MCFC https://t.co/amClfoyX83
Follow
13:25 PM - 21st Feb 16
0
2

In August, Guardiola discovered De Bruyne might miss as many as 80 days due to injury. He promptly turned to the other Silva in town, Bernardo, a tremendously gifted footballer and master technician in his own right. It’s no wonder Pep Guardiola pursued Bernardo as aggressively as David Silva does goals. For £43.5 million, the younger Silva moved from AS Monaco's Stade Louis II.

Not a regular starter at Etihad in his first term, Bernardo slowly crafted himself in the team. Often viewed as a secondary winger behind Leroy Sane and Raheem Sterling, De Bruyne’s misfortune was his gain. He finally had an opportunity to showcase his fine flair as an attacking midfielder. Given the chance, he's been nearly as effective as the senior Silva, racking up six goals and four assists through the weekend.

Often deployed as the senior Silva's partner, they ran the show together from midfield. Bernardo is a typical left-footed player, defined by technical brilliance and vision, blessed with the ability to play quick passes, keep hold of the ball in congested areas and split open opposing defences with his creative eye. He can score, create, mix it in midfield, provide intelligent touches and find a way around or through teams that like to sit in a low block.

The elder Silva's contract runs out in 2020. He's expressed a desire to end his career at his boyhood club, Las Palmas. With a contract extension highly unlikely, Guardiola had to find a perfect replacement for the Spanish wizard. It appears he brought in the ideal apprentice.

Parth believes in the mighty Gods of Barcelona. Camp Nou is his holy place of worship. A football romantic who eats, drinks and sleeps football, there are two times of the year for him: football season and waiting for football season. No beauty can match the vicious hostility of a Wednesday night in Europe