Tim Flowers has the Moors in full bloom

Tim Flowers is remembered as a fantastic goalkeeper, part of the Blackburn Rovers team who won the 1995 title ahead of Manchester United. He is also remembered for an inflammatory interview that season aimed at Sir Alex Ferguson. Now the manager of National Premier Solihull Moors, he and his side will require more of that ‘bottle’ to gain promotion to League Two this season.

Solihull Moors was formed in 2007, following the merger of Solihull Borough and Moor Green. The club was placed in the National North. The Moors secured promotion to the National Premier in 2016 and haven’t looked back. Two years fighting and winning survival were considered a success but they stepped it up when Flowers took over in June 2018.

Just month's after the former keeper came to the club, financial investment followed. Flowers used the funding to take the team to the brink of promotion. They were still in the hunt for the title and lone automatic promotion spot going into the final week of the season but fell just short in a three-way race against Leyton Orient and Salford City. That sent them into the playoffs where they bowed out in the semi-finals to AFC Fylde.

Rather than ruing their big chance, Moors continued this campaign where they left off the last. Once again, they're in the promotion hunt. Flying out of the blocks, Flowers' side went unbeaten in their first five, winning four. After failing to win any of the next six games, Flowers steadied the ship.  At the weekend, Moors lost 2-0 at struggling Wrexham but the club remains in fifth place in the league table, seven points off surprise leaders Barrow.

The National Premier is a very open division this season. Last year Salford City were the clear favourites before a ball was kicked and Leyton Orient were a huge club to be at this level. This year, lesser-known sides have their turn.

Solihull built a great base at home Damson Park. They boast the best home record in the league, dropping just six points out of 33, conceding a paltry nine goals in the process. In contrast, they've only picked up 13 points from 13 games away, a situation Flowers must address. 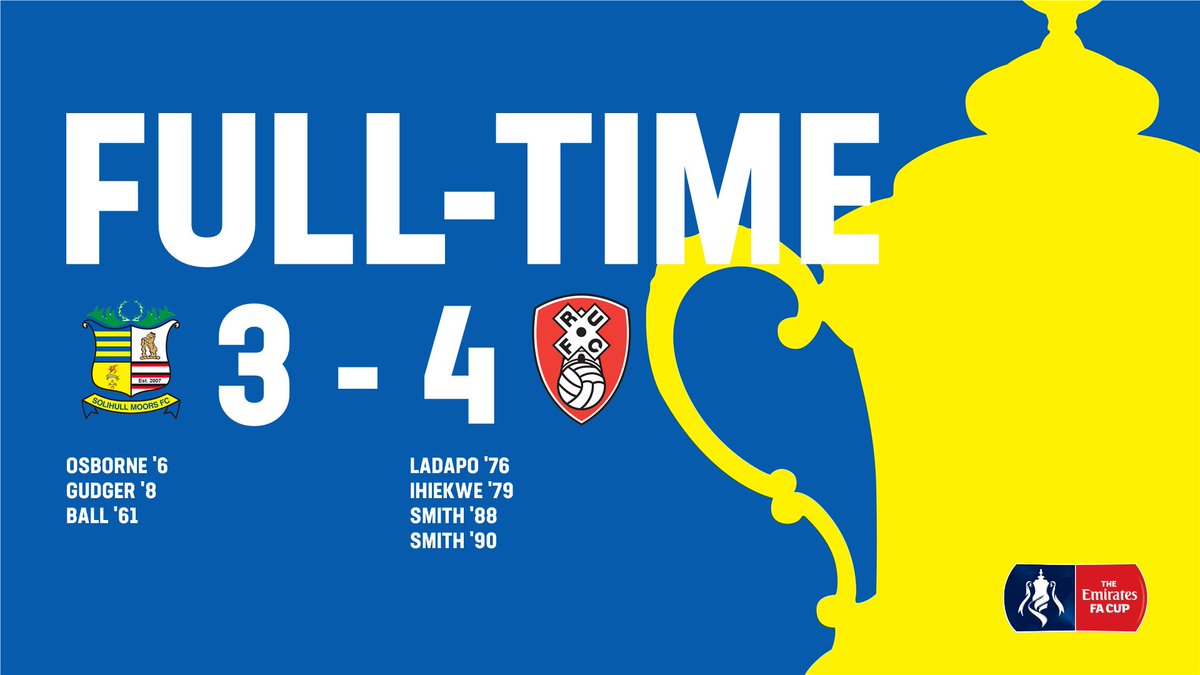 Heartbreak for the Moors who are beaten by a second half Rotherham comeback.

Solihull received national attention in the FA Cup when they hosted League One Rotherham United in the Second Round. They did not disgrace themselves but ultimately suffered heartbreak. Solihull dominated from the word go. Up 3-0 and seemingly headed for a Third Round tie at home to Hull City, they tired. Smash, grab, the South Yorkshire outfit took advantage, scoring four goals in the final 15 minutes to progress on a 4-3 win.

Defeat at Wrexham appears to have been a hangover from that tie. The Moors need to turn things around quickly. The holidays can be a hectic period for non-league clubs. They have another break from the league when they play Darlington in the FA Trophy this weekend but then they host current league leaders Barrow in a huge game. Win and the gap at the top shrinks to four points.

If he doesn't break it, Flowers cracks the mould as a manager. He joins Nuno Espirito Santo among the few goalkeepers who take charge of clubs rather than sticking to coaching. Stafford Rangers count as Flowers' only full-time appointment before Solihull but he hasn’t made a bad start in his 18 months at Damson Park

With no clear favourite for the title, Solihull lurk within striking distance. Having gone so close last season, experience might be on their side. In an era where traditionally smaller clubs are making the breakthrough into the Football League, Solihull Moors could well be the next team to join the party.