Was Jurgen Klinsmann right to quit as Hertha Berlin manager?

It came as a surprise to most German football followers when the news filtered through that Jurgen Klinsmann had quit his position as Hertha Berlin manager. The former United States men’s national team boss lasted just 76 days on the job. He was making a comeback into club football management after over three years away from the dugout. In a way, this was expected to be a chance to demonstrate he still had what it took to lead a club side to success.

For Hertha, that represents avoiding relegation at the end of the season.

The Old Lady has struggled this term despite doing quite well in the last few seasons. Qualifying for the 2017/18 Europa League is testament to that. But for a club with a huge ambition of playing consistently in Europe, things have looked rather bleak of late. With only three wins in the opening 12 games of the campaign, former boss Ante Covic was cut loose. Placed 15th on the table at the time, the club needed an experienced hand to ensure survival at the end of the campaign.

The hierarchy decided on Klinsmann who had been appointed to the capital club's supervisory board just three weeks earlier. He was seen as the ideal person to help guide the side to safety. Decisions will then be made on the way forward at the end of the season. But after 10 weeks on the job, the German football legend decided to quit and return to his initial post on the club’s board.

What are the implications of his surprising decision?

First of all, it hasn't done his reputation any good. The former star striker has been roundly criticised from several quarters, including sections of the press. Former international teammate Lothar Matthaeus even stated that he will find it difficult securing another job in the Bundesliga. It’s also surprising that Klinsmann will choose to abandon the team at such a critical time. It does seem like he decided to leave for fear he would not be able to accomplish the task of securing survival. 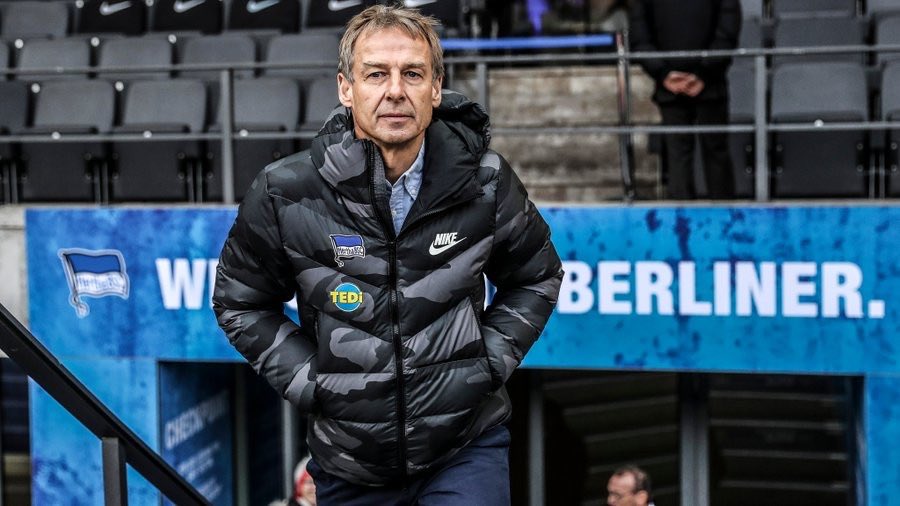 January: Hertha spend €78M (more than any club in Europe) on transfers

But how could that be, given the investment made in the squad? Hertha spent over £60million, the highest amount in the division, to beef up the squad in the January transfer window. New acquisitions include Krzysztof Piatek from AC Milan, Brazilian forward Matheus Cunha from RB Leipzig and Lucas Tousart from Lyon. Although the Frenchman will link up with the team in the summer, there’s enough quality available to get the job done.

Players like Dodi Lukebakio, Vedad Ibisevic and Vladimir Darida are doing quite well. Experienced heads like former Chelsea forward Solomon Kalou and Belgian Dedryck Boyata are also contributing their quota. Despite still being inconsistent, recent results such as victories over Bayer Leverkusen and Wolfsburg had been encouraging.

The more likely reason for his departure is thought to be a disagreement with the club's sporting director Michael Preetz over player transfers. Regardless, his decision to quit was ill-advised. Perhaps the biggest backlash came from the club’s multi-millionaire investor Lars Windhorst, who holds a 49.9 percent stake in the club. The businessman slammed the former German national team manager in a press conference for such a rash and inconsiderate decision, insisting that the club would not accept him back as a board member.

The unexpected change left the club in need of an emergency replacement. Former Werder Bremen manager and assistant to Klinsmann Alexander Nouri has taken charge. Fortunately, he has started on a good note as the team beat struggling Paderborn 2-1 in his first game. In the end, the club will likely survive, but Klinsmann’s behaviour has not been exemplary, to say the least.

The 55-year-old will most likely be regretting his action by now. It has not only cost him his job but his place on the Hertha board. It has called his credibility into question and could affect his future as far as football management is concerned...