What has Germany's World Cup title done for their program?

Four years on, how has World Cup triumph affected Germany's set up? What are their prospects of retaining the crown in Russia?

The Germans overcame Argentina in 2014's finale, yet the tournament is best remembered, no doubt, for their 7-1 semi-final victory over hosts Brazil. It stands among the most destructive performances ever witnessed.

Die Mannschaft have since moved on. Star players in Philipp Lahm, Per Mertesacker and Miroslav Klose all retired from international duty. It pathed the way for Joachim Low to promote fresh talent.

Under new captain Bastian Schweinsteiger, Germany looked ahead to the European Championship. They had a poor qualifying campaign but managed to scrape through as group winners.

At the main event, Low's men defeated Italy on penalties to set up a semi-final showdown with France. They proved second best against the hosts, though. Despite being tagged as tournament favourites, the Germans were unable to match Spain's feat by securing the World and European double.

That disappointment was quickly put aside. Germany's youth showed the future was bright, winning the Confederation Cup twelve months ago. While other nations opted to field strong line-ups, Low selected a largely young team. They were by far the tournament's standout performers.

Germany continued impressive form during the World Cup qualifying campaign. Easing to ten victories allowed them to try out different players and combinations. 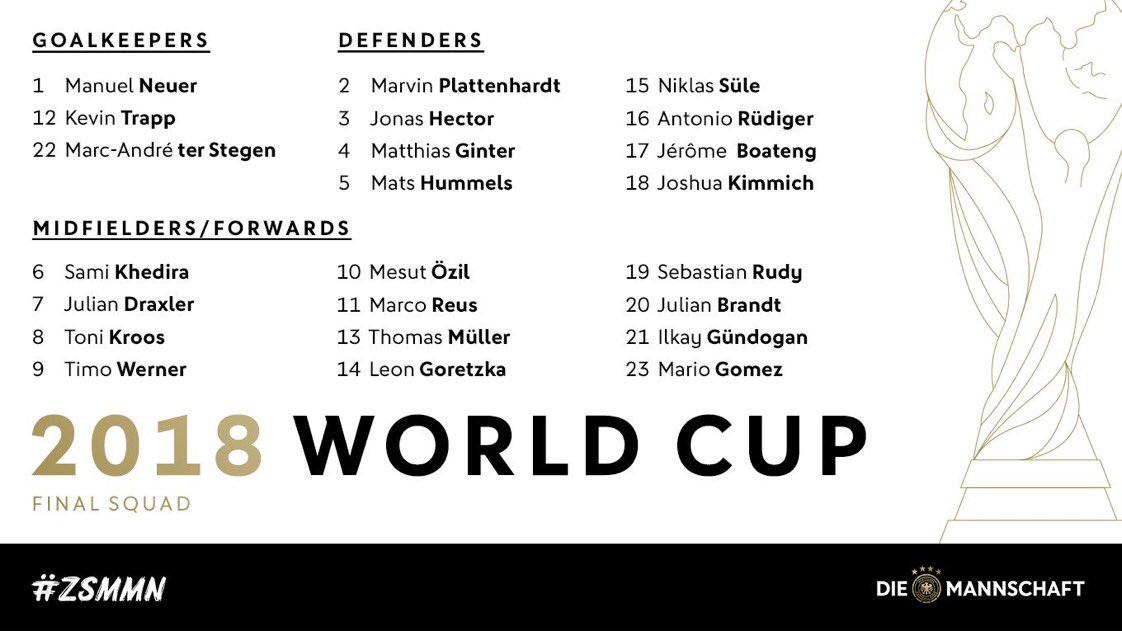 Of the 14 players who featured in 2014's final, six have retained places this time around. They are Manuel Neuer, Jerome Boateng, Mats Hummels, Toni Kroos, Mesut Ozil and Thomas Muller.

Germany’s squad surprised many. Gotze, after cementing his place in World Cup history, has been left behind. The most notable omission, however, is winger Leroy Sane. His fantastic performance at Manchester City this season wasn't enough to earn a ticket to Russia.

Sandro Wagner also misses out, despite having an excellent Bundesliga campaign. The striker later expressed his grievances on social media. Shkodran Mustafi's exclusion, meanwhile, was rather expected. The centre-back had a disappointing season at Arsenal.

Germany's squad boasts experience and class aplenty. Especially in midfield. They also have young talent capable of lighting up the tournament.

No nation has defended the World Cup since Brazil in 1962. Can Germany emulate the South Americans and in doing so, join them on five titles?

Die Mannschaft will expect to cruise through their group. It's far from the competition's most straight-forward, though. South Korea, Mexico and Sweden could all present problems. Finishing top is key too, as the second-placed team will potentially face a last 16 encounter against Brazil.

All the bookmakers have Germany as the second favourites to lift the trophy. Only Selecao are more highly fancied. Low's team may not have an exceptional striking talent to rely on, but a well-balanced, collective effort means they can adapt to any situation.

Germany invariably perform on the biggest stage. Only once have they finished outside the World Cup's top eight. That was way back in 1938. On each of the last four occasions, Die Mannschaft progressed to at least the semi-finals. Expect them to do the same in Russia this summer.