What has gone wrong with Adrien Rabiot?

The grass isn't always greener on the other side. Adrien Rabiot can attest after leaving Paris Saint Germain for Juventus this summer. From a regular starter at Paris to a player now begging for minutes in Turin, the midfielder's reputation has fallen tremendously.

Rabiot was rated among the most promising young players in the world when he burst onto the scene under Carlo Ancelotti at the Parc des Princes. That didn't last long. He enjoyed a few seasons at the top only to mire himself in several controversies. He missed the 2015 Coupe de France final after showing up late for a team meeting. He alienated manager Laurent Blanc in December 2015 by revealing that he had told club president, Nasser Al-Khelafi, to loan him out if his playing time dropped. Finally, his contract dispute led to his benching for the second phase of last season. PSG accused him of misleading the club when he refused to renew his contract despite an oral agreement between the two parties.

Rabiot became a free agent this summer. He signed a five-year deal with Juventus, expecting to set his career back on track when he joined the Serie A champions. Unfortunately, his stint in Turin isn't following that route. There's no easy way out for the Frenchman. His misery continues in Italy. He's had a difficult start to life in Serie A as the odd man out in a heavily crowded midfield at the Allianz Stadium.

Rabiot made just three starts across all competitions this season going into today's Turin derby against Torino. He's spent a paltry 336 minutes on the pitch from a possible 1,170. His performances haven't impressed Maurizio Sarri or supporters when he is given opportunities. The midfielder is yet to record a goal or assist while Sarri for choice. Emre Can, Sami Khedira, Blaise Matuidi, Rodrigo Bentancur, Miralem Pjanic, and Aaron Ramsey all fight for chances.

Unless something changes, Rabiot will remain on the fringe for the foreseeable future but it's difficult to look past the man himself to when pointing to where it all went wrong. Controversy neer leaves him. He suffers from his own weak actions and choices. Selecting Juventus among a host of suitors in the summer doesn't appear to be a well-calculated move.

What is the way out? Is walking away from a second club the ideal option? There is already speculation he has grown frustrated with his situation and could take the exit route from Turin. Some reports link him with moves to Barcelona and Tottenham Hotspur.

Tottenham offers promise. With Spurs struggling and playmaker Christian Eriksen looking for an exit, Mauricio Pochettino might be in the market for a new midfielder even though Rabiot wouldn't be a direct replacement. Poch already has Tanguy Ndombele and Harry Winks as playmakers. The Frenchman would compete for time with Moussa Sissoko and Victor Wanyama in a more defensive role.

Nevertheless, his five-year contract is the first obstacle to be overcome.  Juventus don't need to sell him and may prefer he fight for his place. All that requires is commitment on the player's part. And perhaps a mirror. 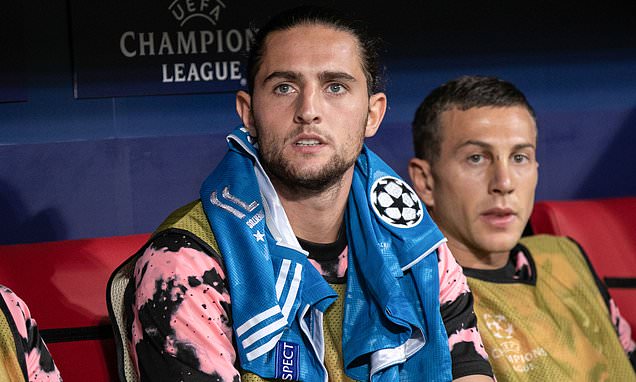 MailOnline Sport
MailSport
Follow
Adrien Rabiot 'is considering leaving Juventus due to a lack of game time' and has 'held talks with Barcelona' over a move despite only joining from PSG three months ago https://t.co/oykBiDJOBq
Follow
18:30 PM - 9th Oct 19
32
181
Live Football Scores