What happened to Aleksandr Golovin at Monaco?

When Russia started the World Cup in 2018 as the lowest ranked team in the tournament (70th in the world), not much was expected. A string of poor results in friendly games heading into the competition led many to think the Russians were going to be knocked out of the tournament at the first hurdle despite hosting the global showpiece.

But a 5-0 demolition of Saudi Arabia in the opening match set the tone for an outing Russian football lovers will fondly remember in future. A certain Aleksandr Golovin played a crucial role in the victory, making two assists and scoring the final goal; a superb free-kick that sent the nation into wild jubilations and got the international media singing praises of the young midfielder.

Having surprisingly qualified for the second round by beating Egypt 3-1 in their group-game meeting, the team faced pre-tournament favourites Spain in the Round of 16. Getting past the Spaniards was arguably the biggest shock in the tournament; and in the history of the competition as a whole. Although the team later lost via penalties to eventual runners up Croatia in the quarter-final, several players had distinguished themselves as the world took notice. One of such was the youngster at the centre of the Russian midfield; Golovin.

The former CSKA Moscow midfielder was amongst the breakout stars of the competition in a team that performed beyond most people’s expectations. Having won the 2013 UEFA European Under-17 Championship with the Russia national under-17 football team, he also featured in the Russia national under-19 football team at the 2015 UEFA European Under-19 Championship, where the country finished second. A step-up to the national first-team was then expected. He did that in spectacular fashion scoring on his debut despite coming on as a second-half substitute with 29 minutes left to play in a friendly game against Belarus. That cemented his place as a regular fixture within the squad. 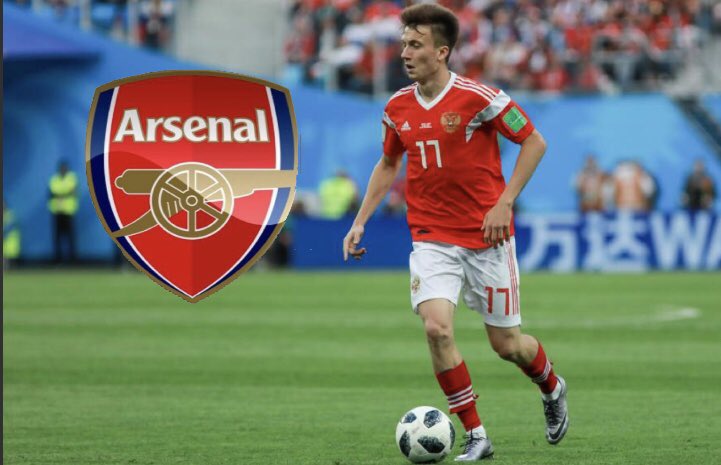 Having shone so brightly at the World Cup, speculations were rife about his next destination as far as club football was concerned. Many European heavyweights were rumoured to have made advances on the player. That included Arsenal who had previously tried to sign the player from CSKA for £10million in 2017, but their bid was turned down by the Russian Premier League side. He finally moved to AS Monaco in France for €30million. Unfortunately for the 22-year-old, his period at the club has coincided with a slump that lasted for the whole of the 2018/19 campaign. But it is during such times that good players also step up to carry the team forward. The young Russian has failed to distinguish himself at the Stade Louis II so far.

With just three goals and the same number of assists in 29 league games, Golovin has been just another player within the Monaco dressing room. Despite the changes made at the dugout with Thierry Henry replacing Leonardo Jardim late last year, and later getting replaced again by the Portuguese just 104 days into the Arsenal legend’s reign, results remained similar. Not even the addition of players like Cesc Fabregas from Chelsea, defender Naldo from Schalke, Lille full-back Fode Ballo-Toure helped the situation. Gelson Martins joined from Atletico Madrid and Leicester's Adrien Silva also made the move to Monaco. Neither made any significant impact on results.

The bottom line is that just as is the case with the team, Golovin has failed to shine this season. Having moved to France with so much promise, the young Russian has so far failed to live up to expectations. Although he has also battled with injuries, he will need to raise his game to reach the heights expected of such a rising star.

Fortunately for Golovin, he is at a club that can afford him plenty of playing opportunities, which was what informed his decision to move to the French side in the first place. So far, he has failed to make the best of those chances. But at 22, he still has time on his hands to make things right.

The question remains: will he step up to the plate and fulfil the potential he has shown at the biggest stage of all?

Or will he become one of the numerous upcoming talents that flattered to deceive but ended up as just another wasted talent? Only time will tell...