What next for Sergio Ramos?

A few days ago, former US President Barack Obama offered a piece of advice for Lionel Messi. The 57-year-old understands the extreme pressure mounting on the Barcelona star ahead of the Copa America. This might be his last chance to win an international trophy for Argentina. On the other hand, Sergio Ramos seems to think the game is up at Real Madrid.

Although a Madrileno by birth, the Merengues captain began La Liga life with Sevilla. The club splashed €27 million in 2005 to hijack him from Sevilla where he played his youth football. Although he was a star at the club immediately, he truly came into his own in the last five years.

His improvements were obvious. he transformed from a scampering kitten into a lion. Whereas finesse was initially his game, he now muscles people off the ball. He's aggressive and doesn't tolerate nonsense. Nor does he wait around to exact revenge for the merest slight. The longhaired brat has become a nasty piece of work.

Times without numbers, he has been the main man for Real Madrid. Ramos saved Los Blancos in the 2013/14 Champions League final against Atletico Madrid. His 93rd-minute goal sent the game to extra time where they completely dismantled their city rivals.

Real's four Champions League titles in five years had as much to do with him as Cristiano Ronaldo. The former provided the goals, the latter the glue to hold the defence together. His aerial prowess makes him a threat in both boxes.

Of course, there was a price to be paid. Ramos can lose his temper and make foolish decisions leading to red cards and suspensions. Beyond the rash challenges, he's twice been busted for intentionally drawing bookings to skirt the risk of a suspension for accumulated yellows ahead of a critical match. That said, he always justified the cost until this season.

Real Madrid failed to make the Champions League semifinals for the first time in a half decade. They also slumped in the domestic League, finishing 19 points behind Barcelona. For the second campaign running, they weren't even the best team in the Spanish capital. The returning Zinedine Zidane is left with no choice than to embark on a rebuilding mission, quite possibly without his 33-year-old captain. 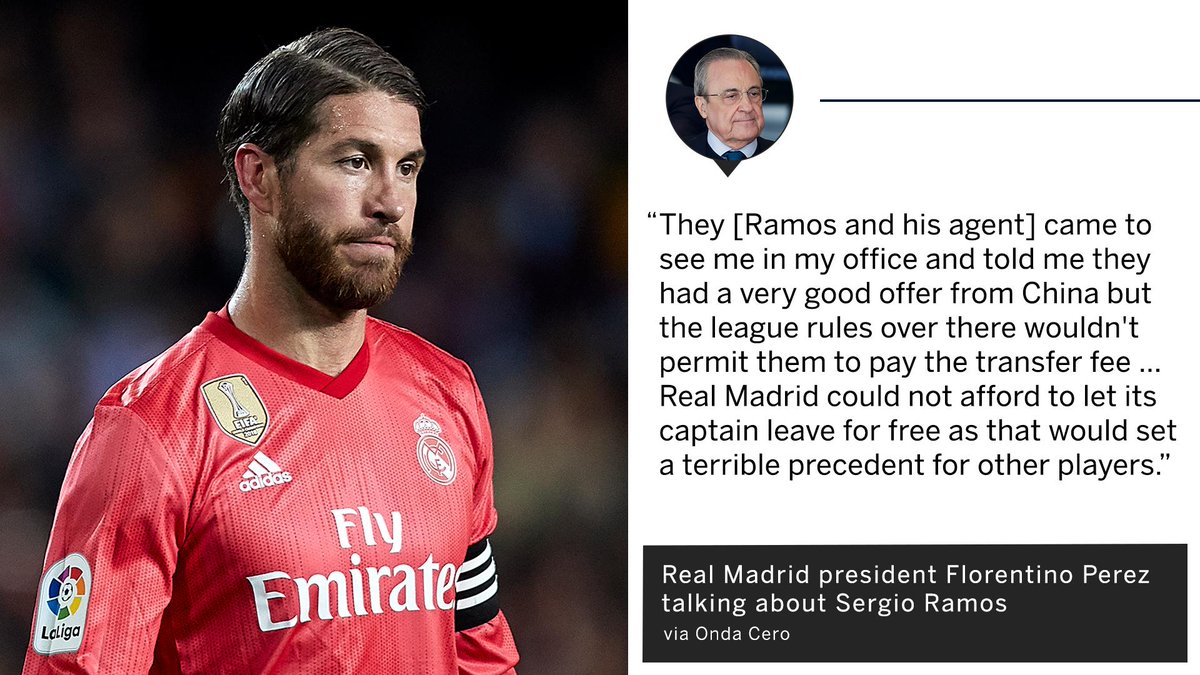 Ramos is tempted by a move to China. The Chinese Super League club in question allegedly wants him on a free transfer after meeting his personal terms. The player sang this tune a few years ago, allowing Manchester United to court him, convincing Florentino Perez to bump up his contract. Yet, after clashes late in the season, it's possible the defender is serious this time. His exit would be disastrous for the Spanish giants.

Although he has slowed, he remains among the world's best defenders. The club is also rumoured to be shopping the younger Raphael Varane. Whether Ramos is bored or simply isn't interested in losing El Clasicos for the rest of his career, a rethink is necessary.

The Chinese Super League can't be compared to La Liga. Great players play for European clubs although we've seen cases where ageing legends and greedy players follow Marco Polo's trail to riches in the Far East, Ramos is a competitor by nature. He won't find satisfaction in China.

If there are any grudges from a disastrous season for all, differences need to be put aside. The captain needs to hear he's wanted. Florentino Perez must swallow his pride and tell him so.

The club intends to be active in the transfer market. Eden Hazard and Paul Pogba are strongly linked. Neymar and Kylian Mbappe have also been mooted. A new galactico project is in the works but it won't come off without a leader with strong ties to the club. There is only one man who fits the bill.

True loyalty is confirmed in difficult times. Leaving the club at this struggling moment will question the loyalty he has built for more than a decade. China has been there for several millennia. It isn't going anywhere. The CSL can wait another year or two for Sergio Ramos.