Yet again, Juventus had it too soft in Serie A. The Old Lady didn't show any sign of letting up, clinching a record eight consecutive Scudetto's, finishing ahead of Napoli. There's still plenty at stake for teams beneath, though, especially the Champions League chasers...

For the second year in a row, Italy's European places will go down the wire. The head-to-head results could decide the league's final standings. Goal difference should not be overlooked either.

According to Serie A regulations,  if two sides are tied on points, the first determinant of the ranking is head to head (goals scored away worth double).

In case of further parity, goal difference in direct matches, general goal difference, the greater number of goals scored in general and a draw would be considered. For three or more teams with equal points, a separate classification will be made, drawn up exclusively on the basis of direct clashes between the teams involved.

Inter’s destiny is in their hands. Luciano Spalletti’s men are in the best position to return to the Champions League owing to superior points garnered. However, the San Siro co-tenants will need to overcome recent strifes.

The three-time European champions missed a chance to consolidate the third position on Saturday after a goalless draw with struggling Udinese. It's the Blue and Black's third consecutive stalemate after sharing spoils with Roma and Juventus. Sandwiched between home clashes with Chievo and Empoli is a tricky trip to Naples.

The less-fancied side from Lombardy could pounce should Inter slip further. Just one point separates the Northern neighbours. Atalanta already punched above their weight, as they consistently did since Gian Piero Gasperini took over as manager in 2016.

This is an unfamiliar position for The Goddess. They qualified for the second-tier Europa League the past two seasons, yet Europe's premium competition is a fantasy in Bergamo. Atalanta's return of 71 goals is the most in the division. They will need Duvan Zapata and co to continue that hot form against Genoa, Lazio, and Juventus. 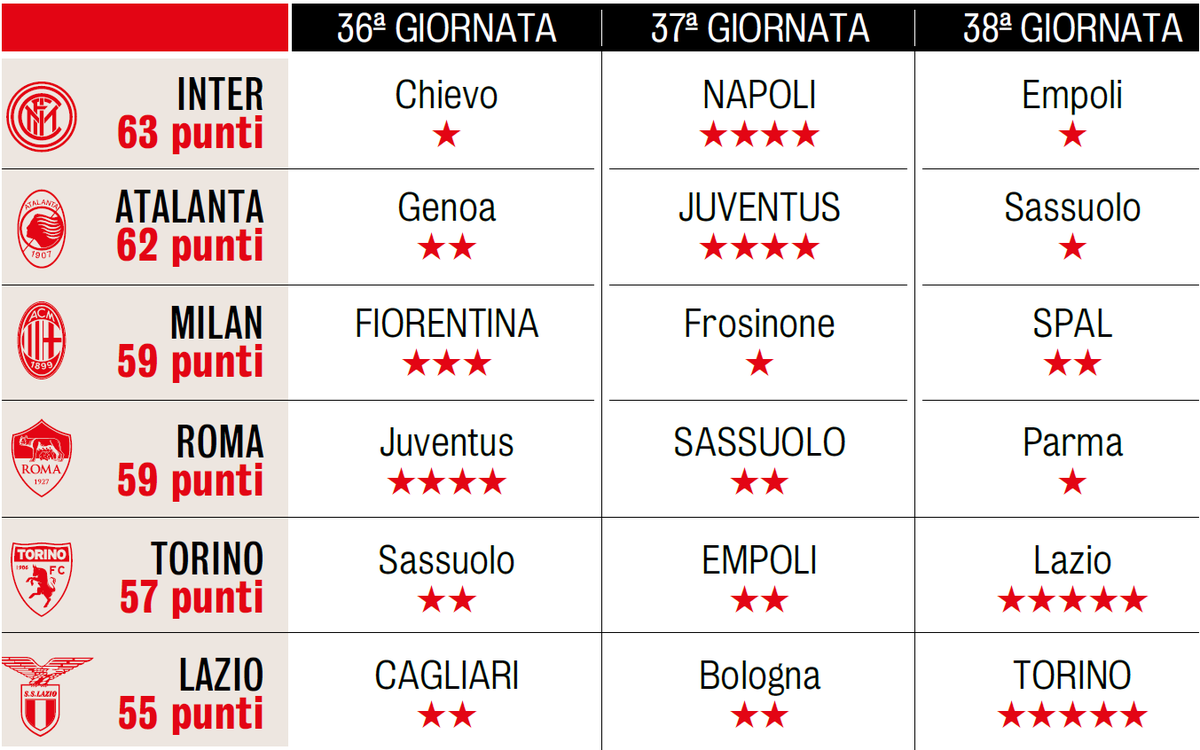 Champions League qualification is the minimum Milan are aiming for this season. That still could be huge to ask following a disappointing run of results, leaving nerves frayed. The Rossoneri picked just one point from a possible nine before Monday's hard-fought 2-1 victory over Bologna.

Milan climbed to fifth place on 59 points, ahead of AS Roma on superior head-to-head record, albeit three behind Atalanta. Gennaro Gattuso must carry that momentum to Fiorentina, Frosinone, and SPAL hoping The Goddess will suffer misfortune.

Roma is enjoying a renaissance of some sort under Claudio Ranieri. The Giallorossi followed up an impressive 3-0 thrashing of Cagliari with a point at Genoa. The capital club is undefeated in six matches on the bounce. However, this recovery may be a little too late.

The Romans stares at the Champions League zone from fifth. Even if they maintain this streak against Juventus, Sassuolo, and Parma, they may ultimately not reach the promised land if teams above don't falter.

Before clashing in the season's finale, Torino battles Sassuolo and Empoli while Atalanta and Cagliari await Lazio.

Verdict: Considering all sides' run-ins, form, and experience, the Milanese pair should reach next season's competition. Atalanta will somehow run out of goals and luck. Ranieri may have exhausted all available tricks.