Football is about taking advantage of opportunities. Alphonse Areola has two knocking. At Real Madrid, Thibaut Courtois’ position is there for the taking. Meanwhile, Hugo Lloris' injury could spell a turnaround with France. Even though he's a goalkeeper rather than an outfield player, it's up to the 26-year-old to take his chances.

Areola's career has always been about maximising the slightest opportunity. Signed by Paris Saint-Germain at age 13, he had to bide his time. He was never the go-to keeper, even for the youth team. Barely two years in the capital, he was farmed out on loan to INF Clairefontaine and ordered not to return until he clocked 18.

Areola returned to Parc de Princes anyway, hoping for a major breakthrough. It didn't happen. The next stop was the club’s academy where he spent three seasons followed by another three years away. At Bastia, he displaced Rudy Riou, racking up 36 appearances. Spells at Lens and Sevilla followed.

Signed after Mickael Landreau’s retirement, Areola made sure the club legend wasn’t missed, keeping 13 clean sheets in 39 matches. Sergio Asensio's long-term injury in June 2015 forced Villarreal to ring PSG. The result was 15 shutouts in 37 games, bettered in La Liga only by Jan Oblak and Claudio Bravo. He broke the Yellow Submarine's record for most minutes without conceding a goal, previously held by Diego López.

On his return to Paris, Areola settled for the second spot behind Kevin Trapp until the German's regular clangers birthed promotion. Finally, he became Les Rouge et Blanc's number one, starting 43 games in all competitions. He was rewarded with a spot on Didier Deschamps’ World Cup-winning squad.

For all that, he just can't seem to convince anyone he is the real deal. Despite two clean sheets in his three Ligue 1 appearances this season, PSG swapped him for Keylor Navas at the transfer deadline, one disrespected professional for another.

Upon arriving in the Spanish capital, it was his pleasure to watch Thibaut Courtois make a hash of things in the Bernabeu goal for three matches, costing him an opportunity to feature against his former club in the Champions League. Again, he sat and watched while Navas made the Merengues regret letting him go.

At last, Zinedine Zidane relented and began calling on the young Frenchman. Following a clean sheet against Osasuna, he came on for the second half against Club Brugge in the Champions League when Courtois spurned yet another chance. With Real down two goals. He shut the door while his teammates fought back to level terms. The Belgian was given the goalless draw in El Derbi Madrileno before Areola held off stubborn Granada in a 4-2 win at the Bernabeu. 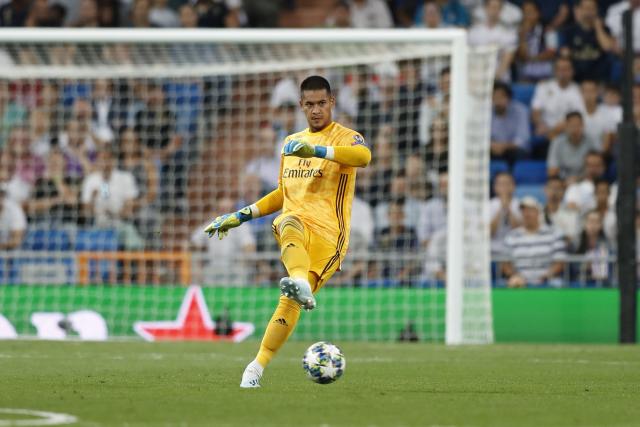 Courtois wasn't directly culpable for any of the goals against Club Brugge yet Zidane turned to his compatriot in the second half. Real attributed the switch to illness but beyond the surface lies the reality of a goalkeeper struggling for form. Areola appears far more confident in his appearances yet, despite the strong case he makes to be first-choice, it's evident Zidane is trying to push Courtois to rediscover his top form.

Areola is far more active when coming out of his box to deal with long balls opponents intended to launch quick counterattacks. His distribution is also infinitely better. He hasn’t shied away from barking orders to his defenders or charging out to claim crosses and corners. He can only keep producing until he makes Zizou a believer.

The same can be said in the France set-up. With Hugo Lloris shelved, a keeper with Champions League experience ought to be favoured over Ligue 1 mid-table keepers Steve Mandanda and Mike Maignan. Instead, Didier Deschamps turned to the former against Iceland. This despite Areola turning in a Man of the Match performance against Germany in the Nations League in September 2018.

With his squad lacking attacking options, Iceland boss Erik Hamren tends to park the bus against dangerous sides. He did so on Friday in Reykjavik, nearly succeeding until a rash tackle on Antoine Griezmann resulted in a penalty. France rode Olivier Giroud's spot-kick to victory while Turkey scored late against Albania to remain on level terms atop the group. At the other end of the Laugardasvollur, Mandanda had nothing to do other than callisthenics to stay warm. On Monday when Turkey visit the Stade de France, Deschamps will reveal whether he was merely protecting Areola for the important match that may decide the group or needs further convincing.

Even when Lloris' dislocated elbow heals, France's goalkeeper shouldn't be written in stone. The injury came in Tottenham's 3-0 defeat to Brighton on yet another howler from the current Spurs and Les Bleus number one. He produces them regularly. His 18 errors leading to goal rank worst among Premier League keepers since he arrived in North London in 2012.

At 32, we've seen the best of Hugo Lloris. Although five years younger, it's beginning to look like the same can be said for Thibaut Courtois. At 26, however, Alphonse Areola's career can finally take off if two French managers give him a proper chance.