Arturo Vidal to Inter should be easy business for Barcelona

By Jidonu Mauyon
Antonio Conte Arturo Vidal Barca Barcelona Blaugrana Fcb Inter Milan Internazionale La Liga Nerazzurri Serie A Italy Beneamata
The Catalans had their fling with the Chilean. Now it's time to let the Nerazzurri have him.

Like every summer, it's been a busy transfer window. Many top players have already switched cubs. Eden Hazard, Antoine Griezmann, Frenkie de Jong. Luka Jovic, Sebastien Haller, Matthijs de Ligt. Nabil Fekir, Nicolas Pepe, Harry Maguire. The list can go on for some time. One superstar who could also make a switch before the UEFA transfer window closes in September is Barcelona midfielder, Arturo Vidal.

The Chilean completed a swoop to Camp Nou last year, leaving Bayern Munich for La Liga in a deal worth €20 million. But after spending a single season in Catalonia, he could be on the move again. Recent developments at Barca suggest his future lies elsewhere.

Vidal was an influential figure during his time at Bayern. He spent three trophy-laden seasons with the Bavarians and was on the verge of joining Inter before Barca came in at the last minute to hijack the deal, a repeat of what happened in the Malcom case.

The Chilean's efforts in Catalonia bore fruits. He played a vital role as Barca won La Liga title last season. He had three goals and seven assists to his name from 33 appearances in the Spanish top flight. The turning point, however, came when Barca lured Ajax sensation Frenkie de Jong into an already overcrowded midfield.

Ernesto Valverde recently conceded that Barca's midfield is overcrowded. The Blaugrana count nine midfielders in their ranks. The manager wants only six. Sales or loans must be made. Ivan Rakitic and Arturo Vidal are two names who could be sacrificed to make space at Camp Nou.

While the club continue to offer Rakitic in a swap deal to bring back Neymar from Paris Saint-Germain, Vidal needs a buyer before the summer ends. Thanks to past history, Inter seem the most likely candidate. Such a move favours both sides.

At the Giuseppe Meazza, the midfielder would also reunite with former manager Antonio Conte. The pair worked together to great effect at Juventus. The opportunity to restore that magic should tempt the Italian boss into a move. He's already announced his intent to challenge Juventus this term.

Vidal's familiarity with Serie A helps to negate the physical limits age has put on him. At 32, the Chilean remains a world-class midfielder. He is still going strong, making the necessary interventions, shutting down opposing attackers, covering huge distances and throwing his body against all sorts of incoming shots. If he's lost any pace, his ability to draw fouls and otherwise manage referees has grown.

At a reported fee around €20 million, Vidal is also affordable. In the end, it would be a win-win situation for both Barcelona, who whittle their midfield down to a more manageable size, and Inter, who need more steel in the middle of the park. If Conte is to keep his promise, Inter must go all out to get their man. 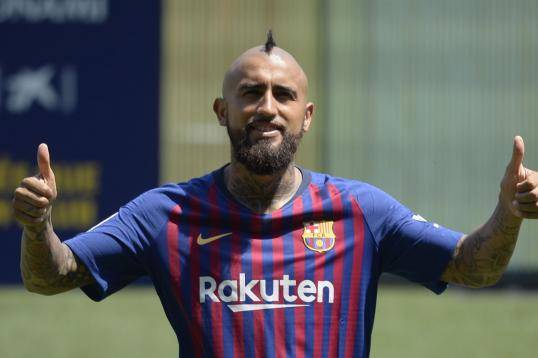