Why Barcelona must reunite with the Prodigal Neymar

The scripture gave a hint about the Neymar-Barcelona saga. The Prodigal son's greed brought the idea of leaving his father's mansion to his mind. In the end, he came back begging because there were no greener pastures outside. To his surprise, his father forgot the heartbreak and embraced him when he returned. Can Barcelona react in the same manner to Neymar?

The Catalan giants brought Neymar into the European limelight from Santos in the Campeonato Brasileiro. Word of his prodigious talent had already spread from the club that gave the world Pele. In his first season at Camp Nou, the Brazilian bagged 13 goals and 11 assists. Those were pedestrian numbers compared to his sophomore campaign. He potted 32, scoring the all-important goal against Juventus that guaranteed Barca's last Champions League title. Regardless, Lionel Messi claimed all the credit, winning his fifth Ballon d'Or. Neymar came third with just 7.86% of the votes. Pundits began asking whether the Argentine legend stood in the Selecao prodigy's path.

Before long, Neymar began to listen.

Then came La Remontada. Other than converting a first-half penalty, Messi was nowhere to be found during the amazing fightback against Paris Saint-Germain in 2016 that sent the Blaugrana into the Champions League quarterfinals after ceding a 4-0 advantage to the Ligue 1 giants in the first leg. It was left to Neymar, who was everywhere on the pitch in the dying moments. He carried the Catalans through on his shoulders, striking a golazo from a set-piece, converting another penalty then setting up Sergi Roberto's tie-clinching strike.

All that took place from the 88th-minute forward, the time when you expect the greatest player in the world to take over. The media anointed Neymar as Messi's heir apparent but it was a backhanded compliment with the codicil that he must patiently wait his time to take on the mantle for Barca. Young men with talent do not wait to conquer the world. They go forth.

PSG's ambition matched Barcelona's. Their roster was steeped in talent. They had money to buy more. Paris is a beautiful City filled with light and music, everything a Samba prince could ask in a kingdom. When PSG called, Neymar answered. The Qatari owners activated Barcelona's €222 million release clause and purchased Kylian Mbappe on layaway to provide support. 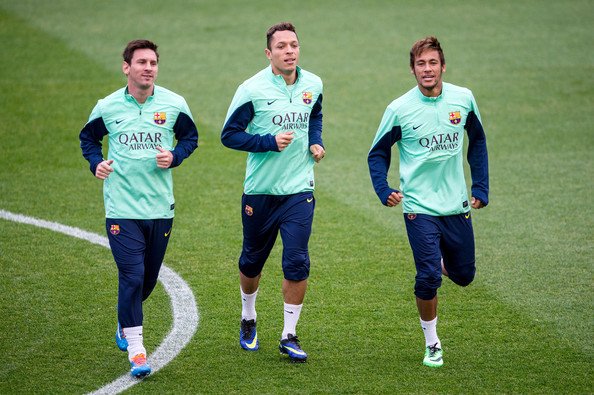 Transfer News
TrustyTransfers
Follow
"I spoke with Neymar about three weeks ago. He regrets leaving Barca more than any ex-Barca player."

The Nou Camp was furious. They considered Neymar one of their own, their future. The betrayal stung. The club asked La Liga not to accept the payment but, in the end, there was no choice. Neymar was gone. The sale's proceeds recruited Philippe Coutinho and Ousmane Dembele. One possessed the departed star's technical ability, the other his pace and directness. It was a bit like King Solomon offering to saw the baby in half to satisfy both mothers. Not an ideal solution at all.

Meanwhile, Messi continued to score 40 goals each campaign before disappearing at critical moments.

The Parc des Princes became home sweet home to Neymar. He was everything there that he was at the Nou Camp and, after an early tiff with Edinson Cavani over penalty duties, the man as well. He scored 20 and provided another 26 in all competitions. But his feet betrayed him whenever he neared the Champions League knockout stage. A broken bone suffered in La Classique against Marseille allowed Real Madrid to eliminate Les Rouge et Bleu in his first season. Another ruled him out against Manchester United in this term's Round of 16.

It was his second injury of the season. In his absence, Kylian Mbappe stepped up to assume the mantle of club talisman. A coup staged, Neymar was again a prince without a kingdom.

However, since his departure, Messi hasn't delivered a European title for the Catalans. His club career begins to mirror his international failures. Twice without Neymar, Barca suffered on the wrong end of remontadas. Last season, Roma overturned a 4-1 first-leg deficit to knock Barca out on goal difference at the Stadio Olimpico. This season, Liverpool reversed a three-goal deficit without the benefit of an away goal, Trent Alexander-Arnold and Divock Origi catching the Cules sleeping on a corner kick.

shAfii
M_dolllar
Follow
Neymar was carrying Barca. That 6-1 win vs PSG. The Champions League top Scorer. Best player in the league only behind Ronaldo. But he was underappreciated and he left now the club is irrelevant in Europe, getting bullied by clubs that are light work for him. He's the real GOAT https://t.co/caoB9zknQF
Follow
22:04 PM - 7th May 19
41
156

Dembele and Coutinho aren't impressing as Neymar's replacements. The young Frenchman's inconsistency and poor focus see him in and out of the team. He missed a golden goal at the last minute against Liverpool that would have left the Reds needing four goals just to square the tie. The club paid dearly for his errancy. Neymar's fellow Brazilian, Coutinho hasn't filled the void. He possesses all the skill but is more reticent, lacking the killer instinct. He's an artiste in a role that demands a predator.

Neymar and Barcelona's bond is strong. It's time for the Catalans to forget the earlier heartbreak and chase their Messiah.

Other stars played the prodigal son at clubs with mixed results. Diego Costa's return to Atletico Madrid hasn't panned out. The naturalised Spaniard lost a step while in Chelsea exile but not his temper. The balance is gone and results tilt to the negative. On the other hand, Radamel Falcao is Monaco's rock in his second tour with the principality club. After failures at Manchester United and Chelsea, he steadies a ship whose young crew is repeatedly shanghaied in the transfer market.

The gamble is that Neymar can emulate Falcao at the Nou Camp, the risk that he will be another Costa. If their wayward prince can bring the Champions League home with him, it will heal all wounds. First, the club must be willing to forgive and embrace to pursue a common cause.