Why Gareth Southgate should revert to an England back five

On Friday night, England lost their first qualifying match in over a decade. Gareth Southgate's men were well-beaten by a Czech Republic side who certainly deserved all three points, timing-wise, it couldn't have been worse for the Three Lions. With the 2020 European Championships just over the horizon, what does that mean for this young squad?

Well, barring disaster, England should have absolutely no problem in topping their group and earning their place in next summer's showpiece. However, the confidence these players carried into the UEFA Nations League on the back of reaching the semi-final at the World Cup has since dwindled. The performances have been uninspiring while a constant tinkering of the squad raises cause for concern. It's time for Southgate to re-familiarise his players with a tactic that worked wonders during Russia 2018; a back five.

Although playing a four-man defence allows an extra body in midfield, what's the point in weakening one area of the pitch in order to bring in another bang-average midfielder? Unfortunately, England is well-stocked in that regard. Quite frankly, the likes of Jordan Henderson, Harry Winks, Ross Barkley, Eric Dier and Fabien Delph are all too similar. I'll reserve judgement on Declan Rice - for now anyway...

Defensively, England doesn't fare much better personnel-wise, though Southgate has shown that he can organise a back five into a well-drilled, effective unit. With Manchester United's Harry Maguire at the base, John Stones (when fit) to one side and his Manchester City teammate Kyle Walker at the other, the Three Lions had something that worked. As the old saying goes, if it isn't broken, don't fix it. 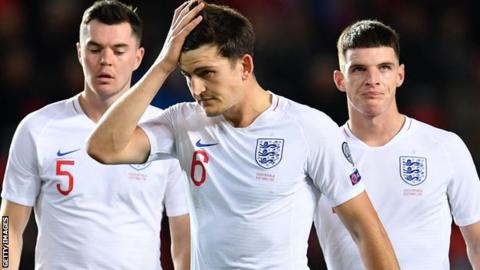 In turn, starting with three centre-halves does play to England's strengths in the full-back slots. Trent Alexander-Arnold is arguably the best crosser of a football in the country right now, while Aaron Wan-Bissaka is an elite one-on-one defender. Over on the left, Danny Rose continues to be steady while he warms the left-back position until Ben Chilwell is fully-ready to take control of that spot in the starting line-up.

This is a change that has been brewing for a while - but it's one England need to make before next summer. It will take time for the Three Lions to get fully back up to speed in terms of a back five, but shipping three goals against Kosovo and then two last time out is all the warning signs needed. The knock-on effect it has further afield is also another massive plus. Southgate can play with two strikers as opposed to the isolated one. Harry Kane is a shoe-in to get the nod, while Marcus Rashford, Raheem Sterling, Tammy Abraham and Callum Wilson aren't bad options to have, are they?

With Jadon Sancho or an ever-improving Mason Mount pulling the strings from in-behind, this is England's best chance at ending their half-century+ hoodoo in major international tournaments. For me, it seems like a no-brainer to make the switch sooner rather than later. It gets the best out of a squad that's only going to get better and in time, perhaps they can re-think switching to the more typical back four. For now, though, a five-man defence is certainly the way to go.

Is it James Maddison’s time to shine for England?
By Danny Glendenning

Gareth Southgate announced his latest England squad nine days ago for upcoming Euro 2020 qualifiers against Bulgaria and Kosovo. Among the usual suspects, there was a first call-up…