Since their semi-final exit from the World Cup last year, many believed that the Three Lions were headed in the right direction. The Nations League represented an opportunity to take it a step further but they couldn't get past the Netherlands. Now they've lost their first UEFA qualifier in a decade. Results against strong European sides suggest England remain a cut below the very best.

The warning bells range early on Friday night against the Czech Republic. England are not as consistent as a side capable of winning major tournaments must be. Even away, they shouldn't be outclassed by sides ranked 40 places below them. FIFA's ranking system is notoriously unreliable but even if there was a +/- of 10, fourth-ranked England's performances against the 44th-ranked Czechs and 119th-rated Kosovo raise too many questions.

If the Three Lions' defence can be sliced open by average European sides, how will they cope with teams like France and Belgium?

It's been pointed out ad nauseam that England does not score enough goals from open play despite fielding two world-class strikers in Harry Kane and Raheem Sterling. It's not that the pair are overrated. It's that they're isolated because Gareth Southgate's midfield isn't strong enough to control matches. The man with vested authority constantly rotates in the centre of the park trying to find a combination that works in either a 4-2-3-1 or 4-3-3 setup.

Word after the defeat in Prague is that Southgate is contemplating a return to a three-man backline. Defenders took it on the chin after the defeat but it's never good when you're constantly pinned back. The switch does give the manager a numbers advantage in midfield, however.

Despite his inexperience, Southgate has done a commendable job with his young squad. Bringing Chelsea’s Mason Mount to the fore was another brave step although it wasn't necessarily the wisest. 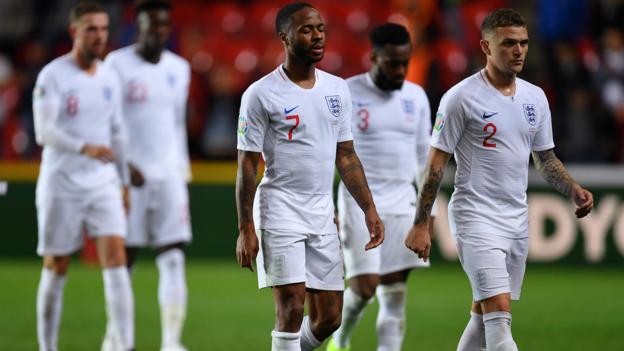 Phil McNulty
philmcnulty
Follow
England crack under pressure against Czech Republic. Gareth Southgate's side can put away mediocre opposition adeptly but again show they struggle to handle pressure coming back the other way. This was abysmal in Prague - no 2020 glory on this evidence. https://t.co/OwDDJImaML
Follow
06:01 AM - 12th Oct 19
26
245

England’s problem is clear. They need creative players who can also protect the backline, raising the question as to why Harry Winks is continually overlooked?

The Tottenham midfielder owns just three senior caps. The last competitive fixture in which he was involved came a year ago against Spain in Seville. Not by coincidence, it was perhaps the best England performance under Southgate.

The 23-year old midfielder played as a left-sided central midfielder in a 4-3-3 setup. Calm and comfortable on the ball for someone so inexperienced at the international level, his play made the forward line look far better than it has in the interim.

That is often the case at Spurs as well. His best performances lead to Man of the Match outings for Kane and Son Heung-min. The North Londoners are a mess at the moment but Winks is a lone bright light in the darkness.

Southgate needs players who can establish control and dictate play. The ball needs to be circulated and consistently reach its intended target. That is Winks' game in a nutshell.

Save for the EFL Cup fixture against Colchester, he has featured in every Spurs match this term. The 23-year-old completed the most number of passes against Aston Villa, Newcastle, Olympiacos and Leicester with an overall 92% passing accuracy. What's not to like?

Ben Pearce
BenPearceSpurs
Follow
Two words: Harry. Winks. Southgate must surely know he's a player who gets stuck in as well as offering the positive but considered passing that England need in deep areas - you can trust him in & out of possession. If England ever win a tournament, I bet Winks is in the line-up.
Follow
23:45 PM - 11th Oct 19
36
505

Granted, he's on the small side for midfielders these days. So were Xavi, Iniesta and Paul Scholes. His diminutive figure cannot be taken for granted. Winks isn’t afraid to dive into tackles or snatch the ball away from opponent’s feet. His work rate often goes unnoticed but his batteries never seem to run out.

Winks’ quick thinking and decision-making outwit opponents in tight spaces. He showcased that a year ago against La Roja and does it consistently with Spurs. The youngster can certainly handle England's Group A opponents.

Southgate admits his side remains a work in progress. He continues experimenting with different players in search of his best XI. Nor is he spoiled for talent in midfield. Declan Rice and Jordan Henderson are reliable choices to shield the defence and England perform best in a 4-3-3 but is it necessary to start both? Winks and Rice look an effective partnership in the deep roles. While Mason Mount, James Maddison, Dele Alli and Ross Barkley are all better suited to the no.10, Southgate can still add more dynamite to the attack if Winks isn't pushed up to the no.8 slot. Yet, even if he is reluctant to sit the ageing Liverpool captain, Southgate should double down on his Harries. It's time to give Winks the nod.