Why the FIFPro World XI continues to annoy everyone

Among the most prestigious accolades a footballer can receive is to be named among the FIFPro World XI. Sadly, not many players ever get to receive that honour. It explains why footballers and fans become highly incensed when a player who clearly deserves his place among the FIFPro XI misses out.

The FIFPro World XI as voted for by thousands of footballers worldwide. In their defence, both FIFA and FIFPRO has continually denied having a say on who makes the World’s BestXI.

Despite claims of innocence and transparency from the governing bodies, the 2019 World XI still managed to leave a bitter taste in the mouth of a sizable number of football diehards. Seriously, go on social media.

Here’s a quick rundown of the Best 11 players selected [by votes] ahead of the 44 others from FIFPro’s list of 55 Best players in 2019.

Liverpool’s Alisson Becker makes it in goal for his heroics in helping the Reds win the Champions League. He also won the Copa America with Brazil.

Dutchmen Virgil Van Dijk and Matthijs de Ligt pair at centre-back. Now here’s the annoying twist. To ensure there’s at a Spain-based defender on board [two in fact], Real Madrid skipper Sergio Ramos earns a place at right-back while teammate Marcelo holds down a left-back slot. More on that later.

Eden Hazard was superb in helping Chelsea win the Europa League. The Belgian dazzler earns a place in midfield, alongside Frenkie de Jong who was astute in dragging Ajax to the Champions League semi-finals. But what’s Madrid’s Luka Modric doing on this list? 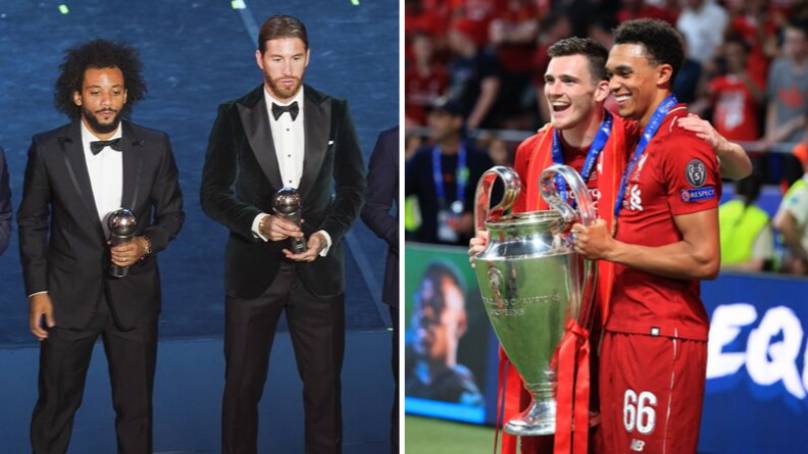 Marcelo And Sergio Ramos Making The Fifpro World XI Over Alexander-Arnold And Robertson Is A Shambles
Sportbible.com
Read More

Kylian Mbappe and Lionel Messi tussled for the European golden shoe down the wire. Cristiano Ronaldo moved to Italy and continued scoring recklessly for Juventus. The inclusion of the trio can hardly be frowned at.

It’s ostensible from the list how Spanish-based players easily dominate. Preferably Real Madrid and Barcelona players. Four players (excluding Hazard) from the two giant Spanish clubs managed to get themselves voted in. Yet, only Messi seems to deserve his place in this team.

At Madrid, Marcelo lost his place to Reguilon for the better part of 2018/19. Only regaining it when Zinedine Zidane took over in March 2019. Playing for a lacklustre trophy-less Madrid in 2018/19, stats showed he managed six clean sheets in the 33 games. Offensively he scored thrice and assisted six. That’s almost laughable numbers compared to Liverpool’s Andy Robertson. The Scotsman helped Liverpool keep 26 shutouts in the 28 games he played. He didn’t score last term but did provide 13 assists.

The same can be said for Ramos. Everyone can agree the Spanish captain is versatile and once played right-back. But those days are long behind him. Trent Alexander-Arnold's exclusion in the team is blasphemous. The Englishman was an integral part of the brilliant Liverpool defence that defied Barcelona at Anfield, and of course, the rest of Europe. Is there a point going over how woeful and shambolic Los Blancos' rearguard overseen by Ramos was last season?

Then there’s Modric. Another baffling choice from voters. Modric paled in comparison to Manchester City’s Bernardo Silva last campaign. The 2018 Ballon d’Or winner lost his mojo in 2018/19 no thanks to Madrid’s poor form. The simplest stats show the Croatian skipper scored four and assisted six goals in the 46 games he played for Madrid last season. On the one hand, Silva scored 13 and assisted 14 in 51 games for City. Add that to winning the domestic treble with a rampant Blues side.

It’s easy to point out 100% of the footballers who make it to the FIFPro World XI ply their trade in Europe. The phenomenon was no different in 2019. Look closer and you’ll notice the World XI is an honorarium to players who did remarkably well in the UEFA Champions League and shone in their respective leagues.

However, the 15-year history of the World XI has seen a few debutants make the lists. Players continue to get recycled from the best teams and leagues in Europe. Old faces shouldn’t surprise anyone; take it as voters are die-hard loyalists who watch too much El Clasico...